The Wandering Rocks of Death Valley 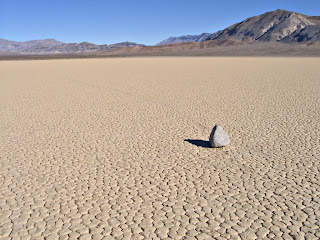 I was looking through my pictures on my computer
and I came across one I had found about the wandering
rocks of Death Valley. When I found the picture and
story a long time ago, it made me laugh.
The thought of these rocks wandering all over
the desert. My mind thought up stories
of a rock waking up one morning and deciding
to go for as walk. Did it get bored or maybe
too hot? Or maybe as one of the kids favorite
books, Silvester and the Magic Pebble, was it
really a donkey transformed by a magic pebble
into a rock.
This is what Wikipedia has to say about it.

The sailing stones (sliding rocks, moving rocks) are a geological phenomenon where rocks move in long tracks along a smooth valley floor without human or animal intervention. They have been recorded and studied in a number of places around Racetrack Playa, Death Valley, where the number and length of travel grooves are notable. The force behind their movement is not understood and is the subject of research.

Racetrack stones only move every two or three years and most tracks develop over three or four years. Stones with rough bottoms leave straight striated tracks while those with smooth bottoms wander. Stones sometimes turn over, exposing another edge to the ground and leaving a different track in the stone's wake.

Sliding rock trails fluctuate in direction and length. Some rocks which start next to each other start out traveling parallel, but one may abruptly change direction to the left, right, or even back the direction it came from. Length also varies because two similarly sized and shaped rocks could travel uniformly, then one could burst ahead or stop dead in its track.

Speed is an unknown variable. Since these stones are rarely transported and nobody has witnessed the movement, the speeds at which the rocks travel are not known.

That last part makes me laugh too, "the speeds which the rocks travel are not known."

We live in a funny world.
I was tired of posting storm pictures and thought a picture of sunshine
would be nice.
It's baby day!! Have a nice Wednesday.
Posted by Farm Girl at 8:18 AM