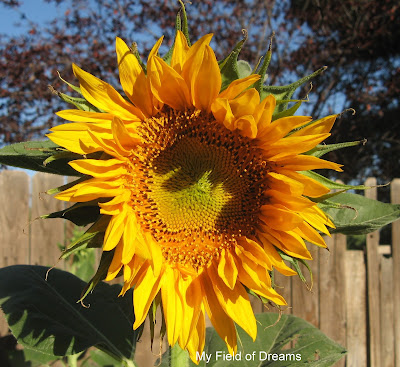 Last night at 8:15 I finished His Eye is On the Sparrow, by Beth Twist-Heartstring Samplery.
Its taken three years, but I did it. 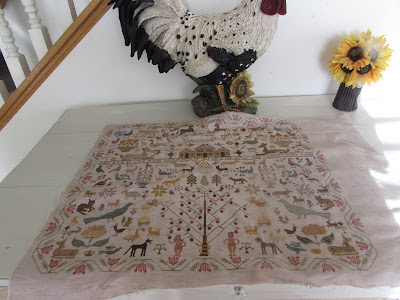 I never dreamed in a million years, I would accomplish this. There were months I didn't even pick it up. I can't even tell you the many, many times I thought I would just put it away. It was a test for me to continue on and keep stitching. Mistakes and all. I ripped out so many times, I was afraid of damaging the cloth. I would say that I learned so much doing this pattern. 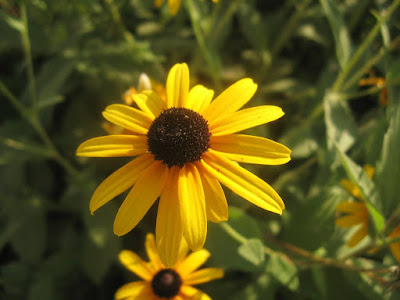 I really had to look at it as one animal, or one page or just this tiny basket of flowers. I lost my mojo the week I realized I had just finished the sixth page, and counted and I found I had six more pages to go.
I sat and stared at it for days before I could even pick up my needle. During this time as I worked on it. Ron has changed jobs twice. Ben and Megan have sold and have been on the road. Kessie and Ryan moved and she had a baby and is getting ready to have another baby and William and Makenzie got married and moved three times. The boys that live at home finished college and have great jobs. I did 40 rugs and sold them. Emilie and Nik have been so crazy busy with life and he finally graduates from Seminary in April. So the saying that I loved so much on that stitchery, His Eye is on the Sparrow, and I know He watches me, was stitched on my heart too. 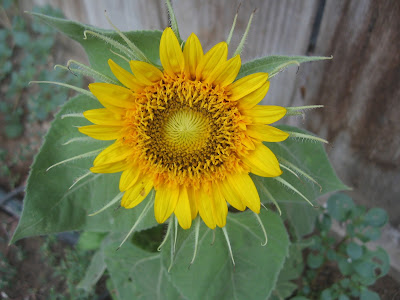 The stitch count of this is 435x363 all that means to me is that its big.
I can't watch anything when I am doing counted cross stitch because looking up and down bothers me so I listen to books on tape. While stitching I have listened to:
Bleak House( twice) Charles Dickens
Dombey and Son
David Copperfield
The Magician's Nephew by C.S. Lewis
Sherlock Holmes read by Benedict Cumberbach
All of the series about Mrs Polifax written by Dorthy Gilman read by Barbara Rosenblat three times there are nine of those books
The Railway Children by Edith Nesbit four time
The Little Princess and The Magic Garden by Francis Burnett three times each
Cherringham-A Cozy Crime Series eight of those.

I can't listen to anything rough or uses bad language or anything like that when I am listening to stuff on headphones. My house has to be clean and my work all done and I will stitch in the afternoons between 1-3. If I have dinner in the crockpot I will let myself stitch until four. I don't do much counted cross stitching once Ron gets home because I can't talk and count. I can rug hook then. 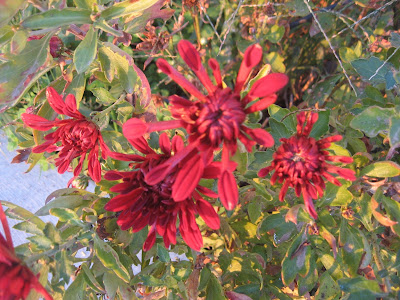 I wanted to finish it before fall, which was Saturday. I almost made it. That was my goal. Now I will take a break I think from counted cross stitch. I really want to get back to dyeing wool. Hooking and drawing out patterns. I did manage to get all of my rugs bound this summer. But I will tell you this, my next counted cross stitch project, well, it will only be on one page.
Thanks for being with me on this journey.
~Kim~ 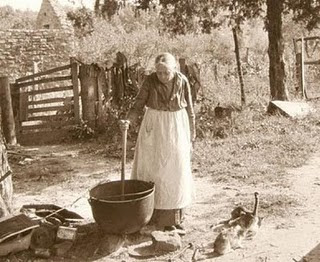 “All my girlhood I always planned to do something big…something constructive. It’s queer what ambitious dreams a girl has when she is young. I thought I would sing before big audiences or paint lovely pictures or write a splendid book. I always had that feeling in me of wanting to do something worth while. And just think, Laura…now I am eighty and I have not painted nor written nor sung.”

Old Abbie Deal patted the young girl’s hand. “Well…well…out of the mouths of babes. That’s just it, Laura, I’ve only baked bread and pieced quilts and taken care of children. But some women have to, don’t they?...But I’ve dreamed dreams, Laura. All the time I was cooking and patching and washing, I dreamed dreams. And I think I dreamed them into the children…and the children are carrying them out...doing all the things I wanted to and couldn’t.”
― Bess Streeter Aldrich, A Lantern in Her Hand
( My life today.)
Posted by Farm Girl at 9:09 AM 11 comments: 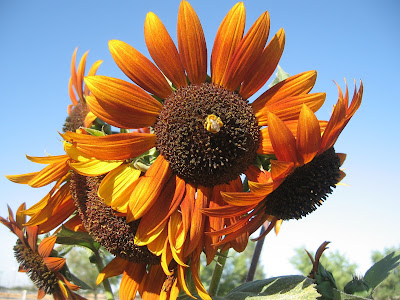 Our heat finally broke. It feels like fall. I hope all of you in the path of the hurricane are staying safe and dry. You have been in my thoughts and prayers. I always feel like this is such a first world problem, and I have wondered about sharing what I did this summer. Finally I decided since I spent so much time doing this, I might as well show you.

We have neglected the pool area for so many years. There always seemed something else that needed taking care of or whatever. This year, after I got the pool fence painted, I realized that I had let hard water minerals build up on the tile. The only thing that worked on the tile to remove the minerals was a pumice stone and elbow grease. The shallow end was pretty easy, but the deep in was more of a total body workout. 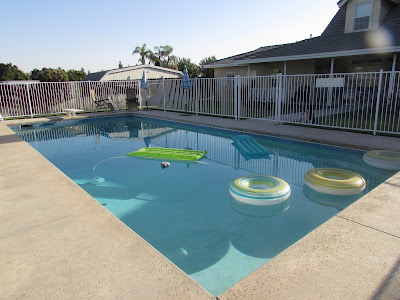 So this summer I scrubbed and scrubbed each and every pool tile around the pool. Ron worked on one side and Peter helped a little but for the most part I did it by myself. I would use two pumice stones and I could get about four or five tiles done. If I did more that that it would mess up my hands and I couldn't sew or anything like that for a few days. Which is why I read 42 books this summer. 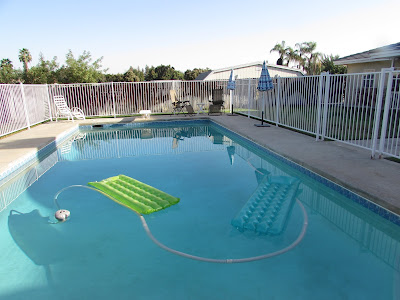 Our local grocery store was the only place I could buy pumice stones that worked. I became an authority on different kinds of pumice stones. I would buy all that the grocery store would sell and some times I would have to wait until they filled the rack. I finally stopped counting how many I bought after 30. I knew that fall weather would be here by Wednesday. The pool was starting to get really so cool. I had about 27 tiles left on Monday. I worked on it Monday afternoon. 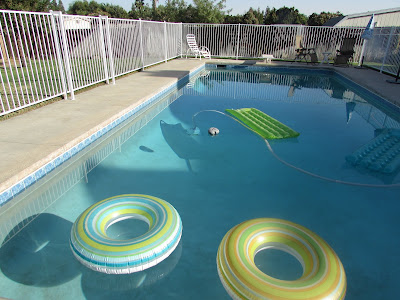 I knew by Tuesday I had to finish. I worked for three hours scrubbing and scrubbing. The last two tiles, I ran out of pumice stones. Isn't that the way it always goes? I got out of the pool and went searching the house. I managed to find about a half of one in my bathroom in the house. I was able to finish and it felt like such an acomplishment. My hands though looked like I had burned them and even today they are still bruised. Because I would brace my feet against the edge of the plaster in the pool, I rubbed the skin off the bottom of my feet. I tried scrubbing from the outside of the pool, but I could get better leverage from inside the pool and being in the water. That way, I could rest and do laps. I do love swimming, but I am glad its almost time to put every thing away. So this years summer project was all about pool care.

I did manage in spite of that to work on His Eye is on the Sparrow, when my hands would work and not be so rough I would tangle the threads.
Just this little bit is left. 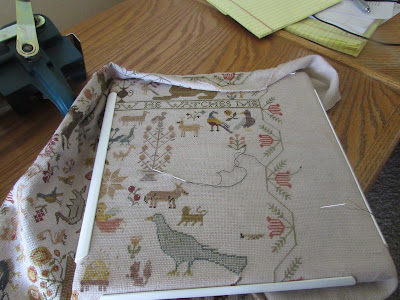 Its bittersweet. I am ready to work on other projects, but this has been such apart of me for so long now. I really am ready to get it framed.

How about some game cam photos?

Tell me what you think this is? 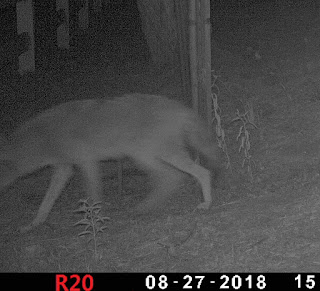 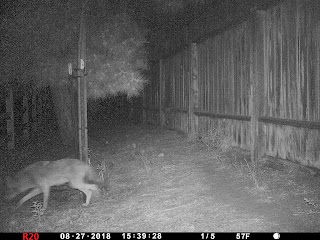 I don't think its a dog or a fox. I think it might be a coyote. What do you think? The morning he was out there, I thought its footprints looked different than a dog or a fox. But I am not that good of a tracker. 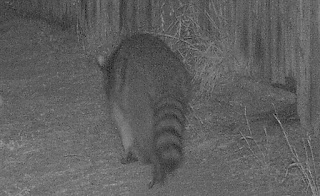 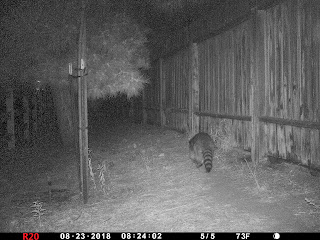 I know you can tell what Mr. Racoon is and he is getting pretty chubby. So there must be something to eat around here. I haven't noticed him getting into my chicken yard. I know its only a matter of time. That is why I lock my hens up in Fort Knox every night. I haven't seen any foxes around lately.
I do enjoy our game camera so much. There is always so many interesting things on it.

Wishing you all of the best,
~Kim~ 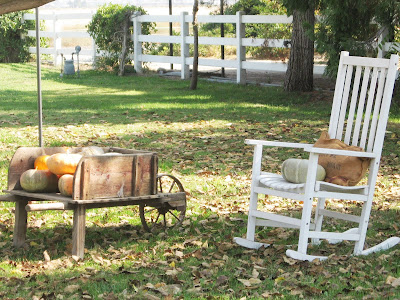 When I turned the calendar, I was so happy its finally September. 2018 is the second warmest year for us. We only had 33 days over 100 this year. Last year it was over 60 so I would say its been a nice normal summer. I am glad though, that even though we won't have fall temperatures like in October, it does begin to cool down. I can open the house and not have to run the air conditioning. 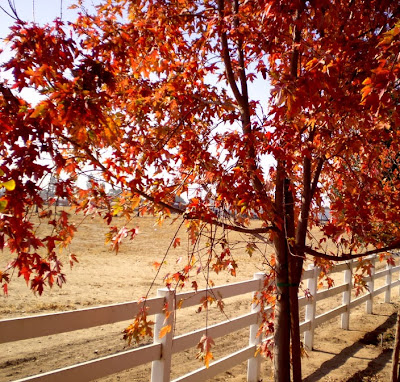 Though, it still looks like this, well not with the red tree yet. We do have some trees already turning though. It still seems early to me. I think with all of the smoke this summer, it has just been hard on the trees. 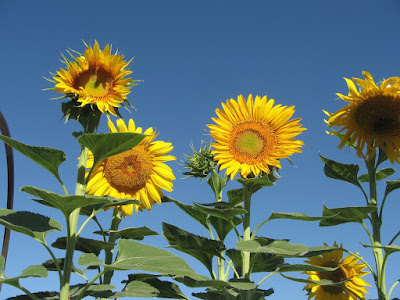 On Ben and Megan's you tube channel. They have a really great story about visiting President Lincoln's tomb in Springfield, Illinois. The Hollar Homestead. They were gifted the flag that flies over the tomb. It still gives me chills. 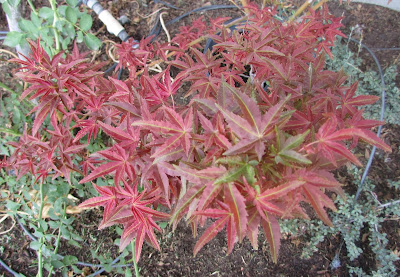 Its cooled off enough that the Japanese Maples are leafing out. They just looked so sad just a few weeks ago. I kept thinking we had lost them. We get a few days of cooler weather and they turn red with all new leaves. I kind of feel like that too. Having a bit of cooler weather always makes me feel like I am coming back to life. 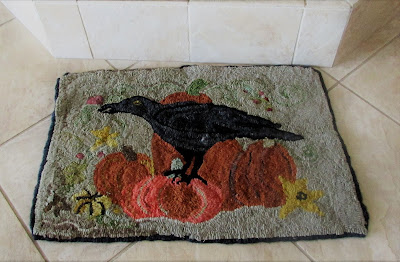 I put my first fall rug out. I had stuck this in the cupboard, and I hadn't bound it. I was going through all of my rugs and  I came across two unfinished rugs. Its finally cool enough so I sat down and finished them. I have no unbound rugs now. Which is wonderful to be able to say, as I think I had six.

I hope you have a lovely Labor Day weekend. I still think that it would be a great day to have a baby. Labor Day.

Only 57 days until I get to go spend time with our Arizona Grandbabies. I am really counting the days. I can't wait to get there. A summer with no grand babies has been hard, but I am very happy that they are following the path that God has for them.

Google sent me that letter that said, I should be able to get comments so hopefully, it will be working again. 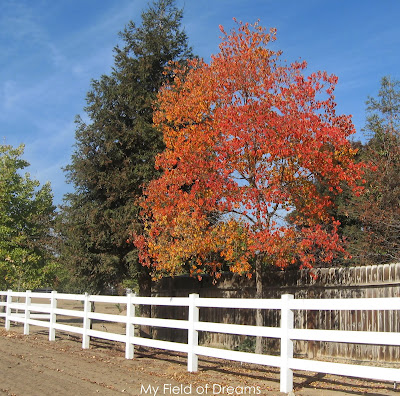 "God uses broken things. It takes broken soil to produce a crop, broken clouds to give rain, broken grain to give bread, broken bread to give strength. It is the broken alabaster box that gives forth perfume. It is Peter, weeping bitterly, who returns to greater power than ever."