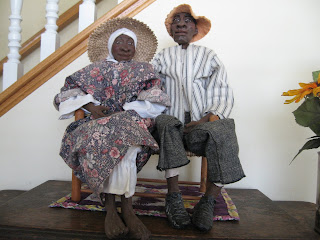 In the 1980's there was a woman who started a company called
Daddy Long Legs. Her name is Karen Germain. The dolls bodies are made
from a block of wood and then the faces and hands and feet are glass. I fell in
love with them. As a little girl my Dad had his first grocery store on a street
called East California Avenue. It was a tiny grocery store and we spent lots
and lots of time there. The people that came in the store were wonderful
people and I loved them. They would tell me stories and I would listen
because of the lives they had once lived.

When Karen Germain started making and selling these dolls, they reminded
me of people I had known. So my first set of dolls were the above couple.
They are called Tobias and Nettie. Well, Nettie was my first. I loved her. 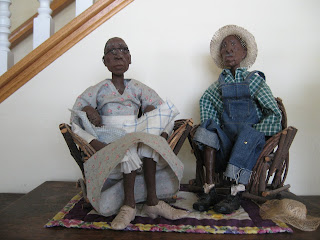 The next ones I got were Oma Green and she is holding
baby Jessie. For the life of me I can't remember the old guys name
I have his adoption papers somewhere. 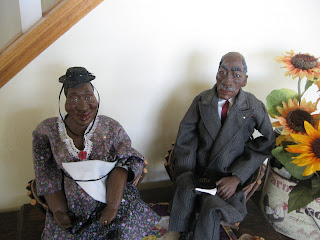 This is Reverend Johnson and Miss Hattie.
My maiden name was Johnson so I just had to have him.
He carries a tiny little Bible. Miss Hattie reminded me of
my grandmother on her way to church on a Sunday morning.

She started coming out with the children and she was going to do
nursery rhymes so I bought Jack and Jill. 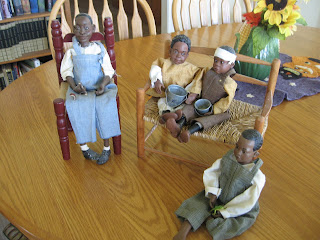 The boy sitting on the table in overalls is named William
so I bought him because he reminded me of my son.
Then the boy in the overalls I just liked. I thought I would
get all of the children

These are Mary and Joseph and baby Jesus that she
released one Christmas. All of the proceeds from her dolls
went to send kids to camp. That always made me happy. 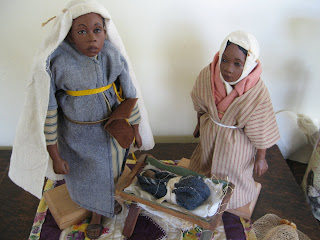 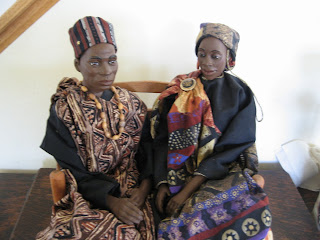 These are my last two dolls. I thought they were just beautiful and
the clothes they wear are made of silk.

Then my kids started growing up , my kids were at the age that friends were over
and you never knew when a ball was going to be thrown or a Nerf gun war
was going to start and I was spending more time in the car and then we
started coming out here, because I had my horse so they just ended up
on the shelf.

It is funny with collections. Now, they just seem like so much weight. None of my kids
like them. They are glass so my grand kids can't play with them. They are from a different
time and place.
I said once when I was young after cleaning out my grandparents house after they were gone
I was going to get rid of everything I owned before I died so my kids wouldn't have to do
it. I still plan on that, because as Corrie Ten Boom had her suitcase and she was "A Tramp
for The Lord." As I get older that becomes more and more of the way I would like
to live. Nothing but a suitcase.
I am not quite ready though, I still enjoy my life... Right now... But, I am getting closer.

That was interesting. I'm still trying to figure out how the hands and faces could be glass. I'm a wee bit too happy to get rid of everything I own, but it does make it hard when others have to go through stuff when someone passes. I wish my mom had just taken a U-Haul with her!

thanks for explaining what these were and showing us too. they're very unique and very personable. i can see why you fell in love with them.

p.s. There are some of these on e-bay.

I know what you mean. Little by little, we'll get rid of stuff and feel free.

Those are cool. You know, your kids may not appreciate those collectibles now but there may come a time when they cherish them because you once loved them. Now, in my 40's I look around here at some of my grandmothers things. I love them but as a teenager I curled up my nose and mocked.

Kim, I think that your collections of Daddy Log Legs dolls are great. They are conversation pieces and reminds you of a gone by era. Maybe their next home could be the museum so that they can be enjoyed by all.

I like the collection - Your kids may surprise you, as they get older they start to appreciate some of these things.

What an amazing collection. I have never seen anything like it. Thank you for sharing.

Kim
So now I know what Daddy Long Legs are! The artist has done a great job at making each doll so realistic. I can see why you were smitten with them.
I agree that someday your children will appreciate them too. Until then, you just keep on treasuring them.
Take care-Kimberly

What a beautiful collection.

I just adore your Daddy Long Legs dolls, Kim, and until yesterday had not heard of them. You do have some beautiful treasures. I used collect Madame Alexander dolls, and still enjoy them.
Thanks for sharing.
This will be the first day this week that I won't be canning, I am going to be out and about gathering seed, so this will be fun for me.
Enjoy your day.
Hugs,
Sue

This was an interesting post. I love these dolls, had never seen them before. I would love to have them all.
I tell myself the same thing about my stuff, I know my son would never want any of it. I have winnowed down so much, but still have more to go. I am trying to keep just what I really love, not just what I enjoy. Smiling, but there is just too much I enjoy!

I remember these. I too am looking at things and wondering also. It reminds me of my husband's aunt, when she died her kids (2) didn't want anything...none of her collections, so they opened the doors to all the neighbors and relatives to come get what they wanted and to sell it if they wanted. I was blessed for the daughter to give me two pieces I had always seen on her mantle...to me they reminded me of her...for me they are a treasure even if her own children didn't want them.

So I sometimes wonder on my own stuff...I will enjoy them and not worry about if anyone else wants them when I am gone...I guess that is just part of this walk of life...and yes, maybe only a suitcase is where I need to get, and be able to go at a moments notice where ever He wants me.

Now look here...you have me rambling and my brain working over time.....Hugs

Wow... Her years of life and enjoying herself. Her being happy looking at her collections. And you are bitching about going through her treasured possessions when she's dead. How about view that stuff as her personality and remember that those things were part of her.