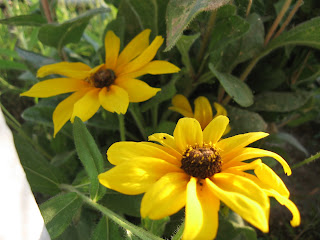 Our weather man said today that summer is officially over Friday, September
23rd at 2:o5 A.M. PDT
We have a high pressure system forming over us this week so our temp will
be 10 to 15 degrees above normal. Sort of like Summer saying," I am still in
control. "
When I was a kid and we showed animals at the fair, this week was always hot.
We would spend these weeks grooming, trimming and it would be so hot. Loading
up the animals and making trips to the fair had to start early in the morning,
because of the heat.
We would be up so early in the morning until late at night working and working and
it was something we lived for and enjoyed even though it was so much work.
Then the second week of the fair, it would seem like fall would finally show up
when we turned the page over to October. 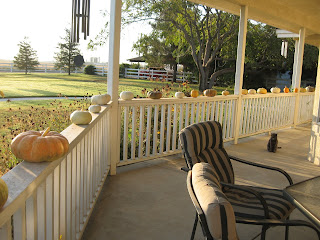 I picked some of the pumpkins and put them on my porch
railings. That has always been my goal to have enough to line
my porch railings. When I pick this next weekend I think I will make it
all the way around. 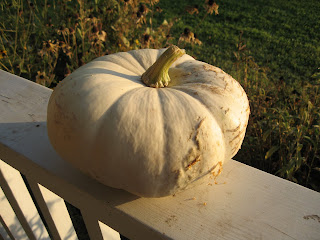 I should have left this one longer. I bought these seeds for
a type of pumpkin I had never seen before and as they ripen
they turn a bluish-grayish color. I didn't know any had come
up until after I had already picked this one. I left this guy until next week. I really like how orange it is
and I do like the shape. I was at the grocery store pricing pumpkins.
You could buy one pack of seeds in the spring and plant them and have lots of pumpkins
to decorate with the pumpkins were so expensive. The Jack-be-little's are
1.00 a piece. I know this year I will save all of my seeds from my pumpkins
just plain ole pumpkins yesterday were 7.00 dollars a each. Then I read how
there might be a pumpkin shortage. Because of Irene and then the rain that
is coming. It just boggles my mind at the way I take things for granted sometimes
like having a place to plant pumpkins.

It is Monday, I hope yours is lovely today.

Your pumpkins are beautiful Kim! I love the assortment. It is fun to realize that one package of seed gives such abundance, then do the math and realize the amount of money you would have to spend!

Yay! I love pumpkins and when you put them out it's so nice. Now fall can officially start. :) I dread this week, when it's so hot because of the fair. At least we are close to October!

the white pumpkin is very different. hope you get a bumper crop!

Kim, what a lots of cute pumpkins to decorate with. I can picture myself sitting there with you and a few blogger friends having pumpkin pie and coffee, ha,ha.

I bet that more than just pumpkin seeds will be expensive next year. Maybe I better save my pumpkin seeds too this year. I only see three pumpkin on my lone vine but there could be more. The biggest one is turning orange and I should take a photo.

Did I told you that every time I see a sunflower I think of you. Hugs. JB

A lovely post as always! I just love pumpkins- looking at them, carving them, their color, their taste!

Oh Kim, I love the pumpkins, they look very festive along the porch railing. One pumpkin, that is all that grew in my pumpkin patch, so very disappointing. This was not a productive year for gardening in my neck of the woods. I too heard there was going to be a pumpkin shortage, and found none available on the grocery store shelf. Hope you are enjoying this most beautiful day! Thinking of you, your friend from Maine, Julie.

I LOVE all your pumpkins. What a wonderful, festive way to decorate. I made an attempt at planting a pumpkin seed, but it alas it didn't make it...sigh. I would love to be able to grow something, haha, Sept. is ALWAYS hot in California or so it seems to me. My BD is on the 28th and I don't think I ever remember a one that wasn't hot. Have a wonderful week! HUGS

I'm happy for you that you have so many pumpkins, but sad because we lost our entire pumpkin crop to the drought before the hurricane. I'll be over for some pumpkin pie. Okay? Sounds like JB would like to join us.

Summer: Do not adjust your thermostat: I am in control.

Lovely pumpkins! I hope they keep until halloween.

WOW...look at all the pumpkins! And, at your huge porch! Love the light colored pumpkins.

Kim
I like the way you've lined your railing with your pumpkins-you really do have a bumper crop!
I, too, heard there is a pumpkin shortage this year. So I'll probably just buy one nice sized one to paint and then use for pie.
I saw a show last night on Discovery, I think, that was showing a horrible storm system that was predicted by meteorologist. This storm was supposed to hover over Calif. for over a month, etc, etc. It made me think of you!
Well I guess we can take it all with a grain of salt. If we paid any attention to all the disasters that could befall us we would never be able to sleep.Ever!
Have a good week, my friend-Kimberly

Love your pumpkins...we haven't had the trucks come in with them yet...and I love all the varieties we now can get, so much fun...there are so many ideas on how to decorate them...your porch looks great

Oh our state fair starts in a couple of weeks and we get to go see all the animals.

Have a great week.

Your pumpkins look so pretty on the porch railings. You are a good pumpkin farmer.

How lucky you are to have grown so many handsome pumpkins. I was at the farm this weekend and spent a small fortune on my pumpkins.

the only job where one can be 50 percent wrong and still keep their job.
thankfully, God is still in control.

Your pumpkins look happy on your porch rail! Glad they have done so well! Thanks for your prayers. Please continue..as the next 30 days will determine if the meds are going to be the answer for our DIL.

Oh do I ever love your Porch!!! And the pumpkins are sweet. I wish our summer lasted long enough to grow them.

Love the porch - looks perfect for a couple of rocking chairs.