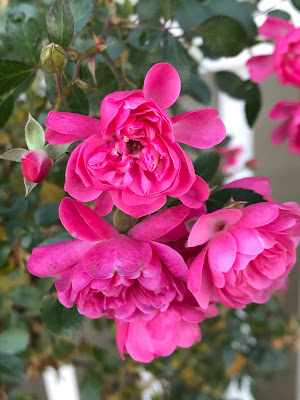 Good Morning! How are you this morning? It is foggy and cold here in California. Though not like the rest of the country. We have a week of storms coming. If you have followed this blog for any amount of time, you know how we love rain! Rain in the forecast is like saying I am going to be opening a present soon of something wanted very badly. Always time for celebrations.

When Pinterest first came on the scene. I pinned a picture of a tea pot. Yesterday while taking Makenzie shopping for her birthday, what did my little eye spy? 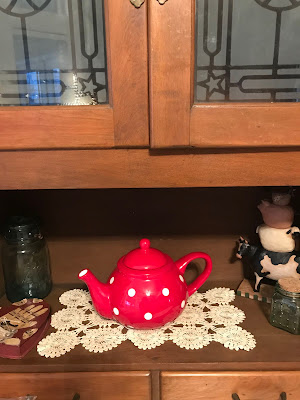 The teapot! Now I have want to have a tea party. Since its almost February everything would be hearts. Like heart scones and red and white cupcakes and lots of tea. I might just have to brew some tea this morning and have a cup of tea on this cold morning.


In between working myself silly, gardening and planting seeds. I have been hooking oh so slowly, but hooking when I can. I have done this rug 4 times. This is my fourth. I am using only worms I had left over from other projects. This is for the most part 9.5 cuts. I have sold the other three rugs and I am not selling this one. Its different from all the other rugs. This is called Mother Earth from Maggie Bonami. 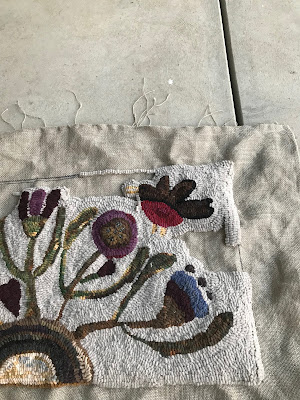 I have never done it with a lighter background and I have to say I am really enjoying it. The colors are different from what I normally use, but I like that too. I need to finish it before Friday so I can say I have one finished project for January. 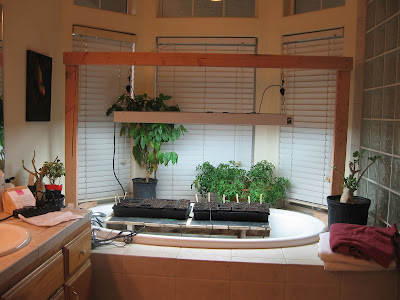 Ron built this this weekend. Isn't it cool! Its for starting our seeds for the garden. We just started tomatoes and peppers this weekend. We also planted lettuce but its outside. He also planted five oak trees, and two apricots and a lime tree. We got over 200 berry vines in the ground. 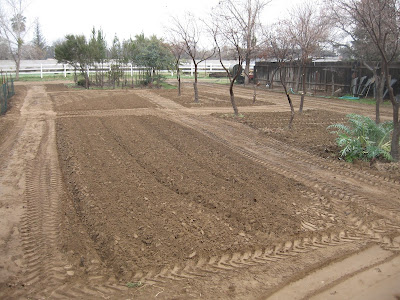 Doesn't it look pretty all in nice beds and so clean? I have three five pound bags of seed potatoes and 100 brown onions to plant. Its too bad Ron has to work at a day job. I am finally not sore today so I could plant before it rains. I can always move further out in the pasture if I run out of room here.
Of course, by August I won't be singing this song. 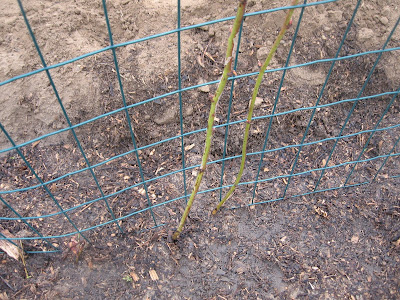 I just love looking at all of these canes. Its hard to believe they will all be leafed out by April. They have such nice buds on them.

That is what I have been doing. Just keeping myself entertained. I have seed catalogs everywhere. When I sit I grab one and the visions just dance in my head.

I hope you have a lovely day. I hope it isn't too cold. 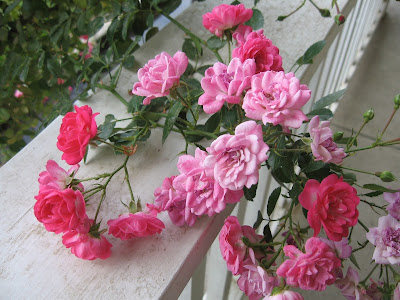 "It is certain, I think, that the best government is the one that governs the least. But there is a much-neglected corollary; the best citizen is the one who needs the least governing." ---Wendell Berry
Posted by Farm Girl at 7:56 AM 13 comments: 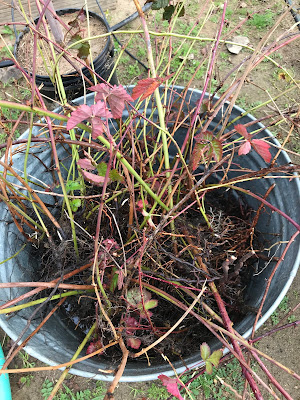 Today is the day. These wonderful vines will be moved to their new home. I can't wait to get them all trimmed and into a new place. I went to three different places yesterday to find Boysenberry vines. My last stop was Tractor Supply and they had a few. I bought six new vines to add to my collection. Not all of these will make it to my new row because they are the thorny kind. I think I will cull them.

Yesterday we worked out back to get the ground ready. It was a perfect day. Not hot and cold enough that it felt nice to be in the sun. We worked all day long out there. That is the one good thing about January living here. 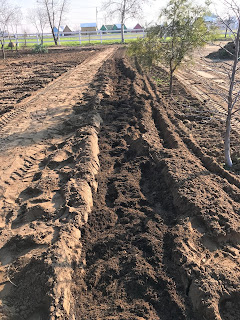 We not me of course. But I watched. Ron dug a trench with the tractor and then we filled it with soil amendment and mulch. I know this is going to sound weird, but one of the things I love about living here is the soil. Its a loose sandy soil and it is rock free and it smells amazing. Its nice and damp from all of the rain. 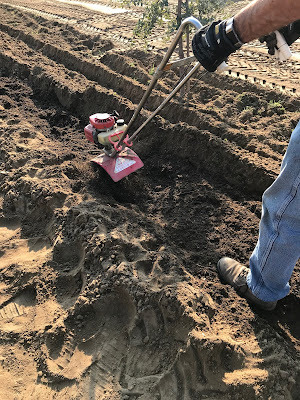 We used our little Mantis to mix all of the soil amendment, mulch and everything all together. I did a little bit of it. What a work out! I need to use this Mantis lots more. Instead of using wire strands so the berries can grow we decided to get some other kind of wire to see if it helps keep the vines better and keep the vines off the ground. 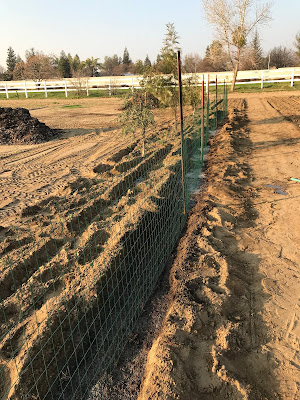 Doesn't that look nice? I will be out there on my hands and knees pretty quick. I was cleaning my chicken pen and two hens, were just desperate to lay eggs so I came in and decided I would write a post while I waited. Ron is cutting up some trees we took out yesterday. We lost so many trees last year from the heat. He was cutting them up and using the shredder. Its pretty loud. I just thought I would stop in for a minute. I should get back out there.

Thanks for stopping by,
~Kim~ 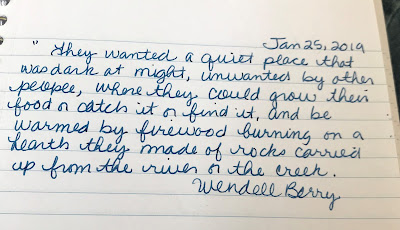 I read this yesterday and I thought, this has always been the cry of my heart. I know that is why Ben and Megan decided to go to North Carolina, for just this kind of living.
Posted by Farm Girl at 10:06 AM 11 comments: 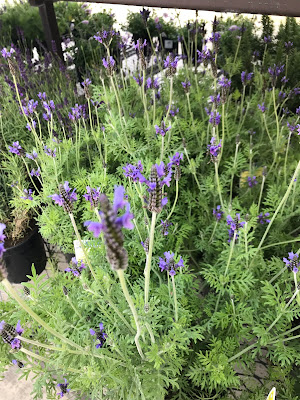 My pantry is empty. No jars filled with goodness from the past summer. No relish, no jam, no pickles.
I have already put sweet potatoes in jars on my window sill in hopes that by spring time I will have slips to plant to grow for a bed of sweet potatoes. I plan on planting other potatoes, and beets and squash and on and on it goes. Last weekend we took out all of our berry vines so we can move them to another spot. 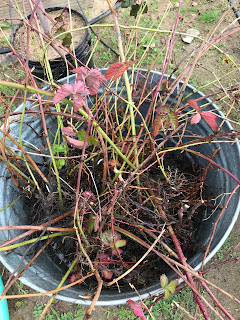 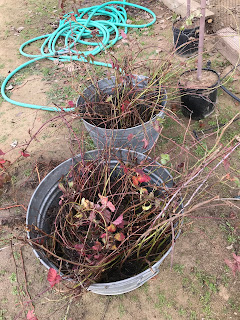 I couldn't believe how they had multiplied. I am sure more will come up and I will just move them over. These are thornless boysenberries. I have some thorn ones mixed in there because the ones with thorns really do produce the best flavored berry but they are miserable to pick. We will see if I keep them when it comes time to get them in the ground. 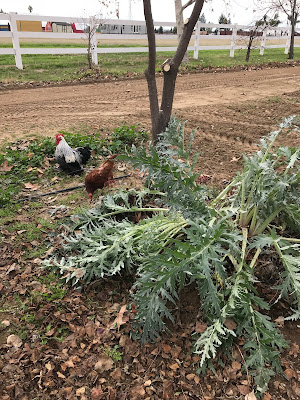 The poor abused artichoke continues to grow. If you want to grow artichokes, you can't be nice to them. Maybe water but nothing else, because once you begin taking care of it, it will just die. I ignore it most of the time and it is now about five years old and it comes back every year. It even had a baby but I think I forgot about it and Ron plowed it under. Oh well. This one grows more artichokes that we eat. 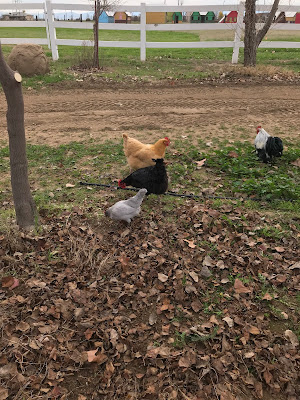 Its a chicky year. I need new hens and I am fighting it. But I would like to get fifty new hens. That number keeps going up. In December it was 15 new chicks. A couple weeks ago it was thirty. Now I am telling you that I need fifty. I need lots more chickens than I have now. I think I have 15 hens. 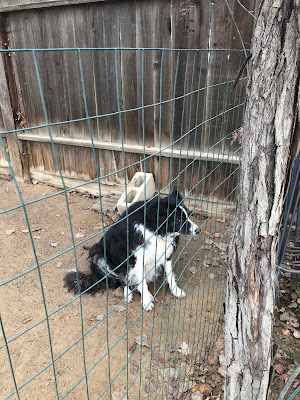 I let the chickens out where we were working so they could free range. Sasha went and got in the chicken pen. She just seemed so happy there in the pen. Silly dog. 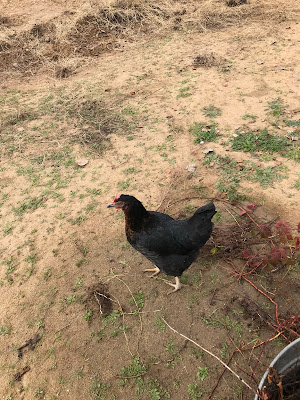 Here we are mid January. I really did think I would write more than just a little bit for 2019. Life has a way of taking all of my attention. January 1st Ben and Megan announced they would be moving to North Carolina. That day I also found out we would be having our 11th grand baby. Our youngest son was in China amid state department warnings of traveling there. When he bought his plane ticket there wasn't drama with the U.S. and China. He made it home safely. Last weekend our number 11 grand baby went to heaven. Mom and Dad are doing okay this would have been their first.  So the first 19 days have been rather wild.
Gardening for me allows me to process and working with new plants and dreaming of spring and seeds and even chicks helps me to stay grounded and helps me to keep my head on straight. Plus like crying in the shower, crying in the garden is a good place to get over myself. 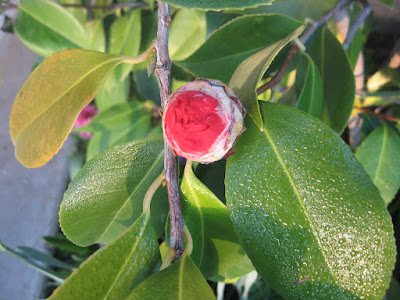 Now to grab the hula hoe and work on this giant bed of stinging nettle I have growing in the back yard. Amazing stuff stinging nettle. I should dry it all and use it for tea.

I wish you a wonderful day. 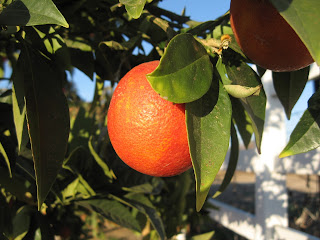