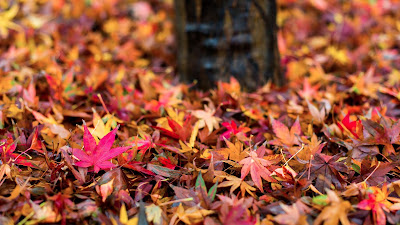 We are in Mid October and I am finally doing a post. Oh my gosh, I wish I could tell you what on earth I have been doing for all of this month, I have worked on lots of things so I haven't been completely a slacker.

But first, Do you know the Blog Rugs and Pugs? Lauren sent me the loveliest surprise gifts. She does the best work. I have entered every giveaway she has and I win too, so I do feel guilty a bit sometimes, but I wanted that pumpkin she makes from hand torn strips. I was so happy when I opened that box and there one was. 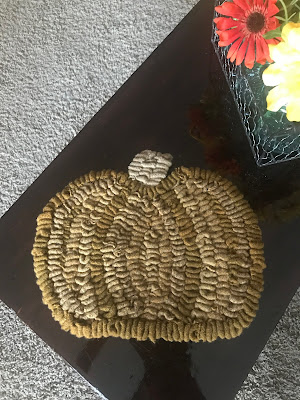 Isn't it lovely. That wool is so yummy. I have really moved it all over just so I can see it better. But she also sent a sunflower on an old spring. Another project she has done that I have loved so much. I also move it around. Its beautiful. 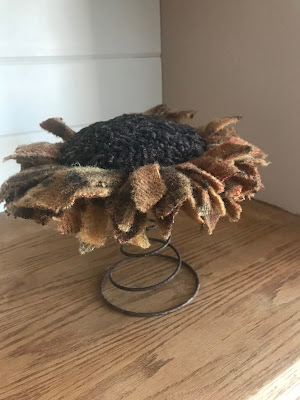 She does the best hooking and making everything look so perfect. She also sent some of her handmade jewelry which I love and I put that on my key chain but I may move that around too. So thank you so much Lauren for thinking of me.
I thought I would give you an update on baby Halen. He is off the respirator as of Tuesday. He has grown and now weighs 2.8. He it drinking the full amount of milk for babies his age. He is 29 weeks old now. He is such a sweet baby. 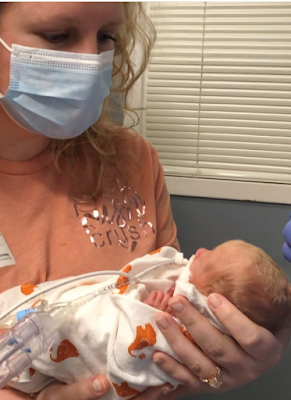 The nurses were changing his bed and this is the first time Makenzie was able to hold him. I love this picture so much. He was still on the respirator and all of that stuff, but as the camera moves around and you can see his face, if he hadn't have had all of those tubes, he was trying so hard to talk to his Mommy. I tell you I have never cried in my life as I have cried in 2020.
Okay, onto other things. I have been working on this rug. Its a pattern by Whimsy Rugs. I have really enjoyed it, but not hooking for almost a year, sure has made it hard to get back into the swing of things. At night, my hands are blue. I know it will pass, but I never knew I would have issues with my hands. 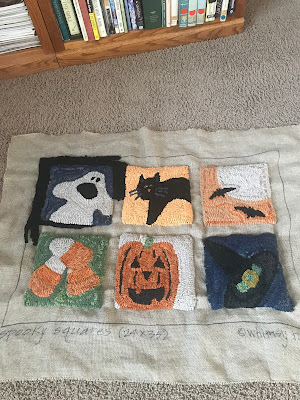 Its fun and I thought it would be so much faster than it was, but I did have to dye wool and that was fun and nice to do. This rug is 24 by 35. I will get back to my other rug soon, but I needed something just a bit smaller to work on.
This last weekend, I finally did some wood projects. Very fun. Ron cut out the shapes for me. This was thicker wood than I would use on my scroll saw. I love how they turned out. I hung them outside on the lights around the garage. 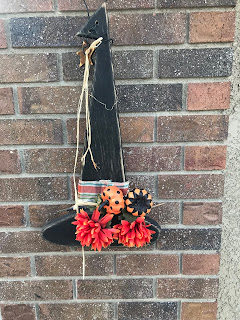 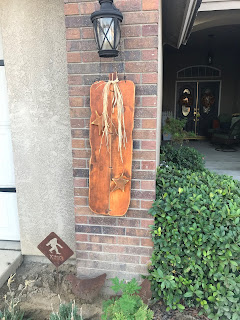 If you can't tell the top one is a nice witches hat and the bottom is a large pumpkin. I had to buy new wood, which was nice, but I did miss my wood pile. That was fun. I haven't done that in a long, long time.
2020 has been a life changing year, wouldn't you agree? Little did I imagine how many changes would happen. Selling and buying a house and moving is hard enough. Then we have had three more babies added to our family. Two girls and a boy. On Saturday, Elliot proposed to his girlfriend and so we will add another member to our family. Karren. I am so excited to have another daughter in the family. It seems like 2020 has been a year of highs and lows. But looking back, I would say that the highs far outweigh the lows. I think how we look back at September 11th as a turning point, so will be 2020. I know it is for our family.
There are so many, many things that I could write a book, and I know you could as well. I have been reading lots of books about world war two and world war one because those people made it and were better for it. I hope that the same will be said years and years later, that 2020 was the year we became better for it and we ended up seeing more good than bad and we have found how to be happy despite of what was on the outside and I know for myself, happiness is about a smile, a hug and friendship. 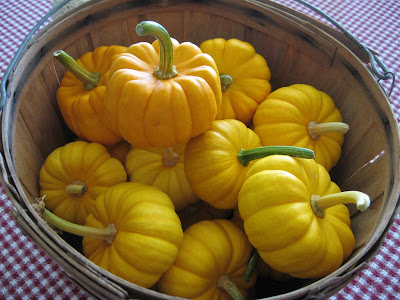 Thanks for stopping by, we are still in the nineties. So not fall yet. Soon I hope, at least by Halloween.
~Kim~
Dusk in Autumn
Sara Teasdale - 1884-1933
The moon is like a scimitar,
A little silver scimitar,
A-drifting down the sky.
And near beside it is a star,
A timid twinkling golden star,
That watches likes an eye.
And thro’ the nursery window-pane
The witches have a fire again,
Just like the ones we make,—
And now I know they’re having tea,
I wish they’d give a cup to me,
With witches’ currant cake.