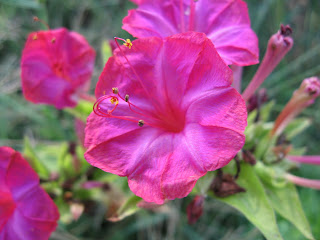 I guess I should let you know I have lost my blogging mojo.
For the life of me I can't seem to come up with a single thing
to think about or talk about or anything.
I feel boring and my brain feels like oatmeal. I have never had a
blogger block but I seem to have one now.

I sit and stare at the blinking cursor and beg my fingers to just
"do their thing." They just sit there. I thought it was odd the other
day when I couldn't spell a single word right. Now I can tell the
problem has moved up to the brain and my brain is in a deep freeze. 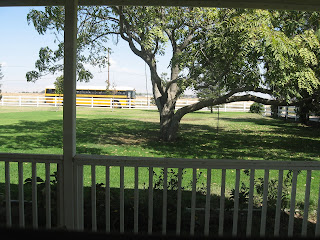 See how bored I have been? I took a picture of a
school bus that was broken down in front of the house.
I thought that was it but it was maybe the bus driver
yelling at kids. Who knows, my mind came up with
all sorts of things while they sat out there in front.
The bus finally started up and lumbered off like a giant dinosaur
in a puff of smoke.

One of the things that has been hard for me in making rugs or
even quilting is cutting up cloth or wool. I just want to sit and stare
at it and touch it but in order to make something I have to cut it.
Well I noticed my husband is having the same problem with cutting
his trees he has grown from seed.
So he has turned into a nursery lurker, going to nurseries looking for
trees he can cut into Bonsai. 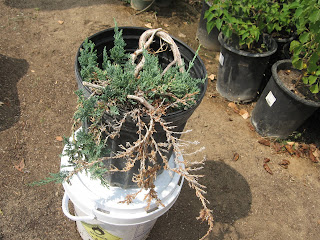 This was his first patient. He found it in the back
of a nursery, unwanted and almost dead. He was so
excited about it and brought it home. 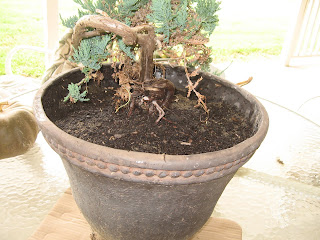 He cut it and trimmed it and re-potted it. 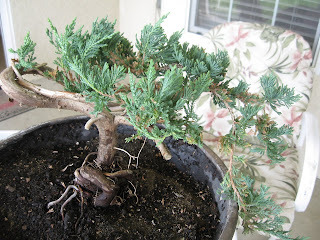 He likes it because of the way the roots are all gnarly
and twisted.

I still do it sometimes, I just need to make a break for it
and go to Michael's , or Beverly's our local yardage store
or even I am in a bad way I will drive all the way over to Joanne's.
But watching my husband now just makes me laugh as he comes
in and wants to go look around at a nursery or the garden department
at Lowe's or Home Depot.
I find it cute and a source of real entertainment.
I take my sewing and go sit out in a chair while he trims and clips and plants.
The kids don't really understand what is up with their parents now. Dad and
Mom have these weird obsessions.

But I mean really, who wants to watch the news? It is really nice
to do something different.
Maybe that is why I have writers block. You know if you can't say anything
nice don't say anything at all, and I am determined I will not discuss politics
here on my blog.

So I am all over the place today, but I thought I should at least let you know
what is going on.

We bloggers all have these moments. Mine mostly consist of sitting in front the computer wondering why people would be interested in my thoughts, ramblings, photos, life, etc. Then I think of something and put it out there. Those are usually the posts that get the most feedback for some reason!

I usually work backwards from a photo - I always take my camera with me where ever I go!

I like your school bus post - I have taken pictures of snow plows and posted about them!

maybe you put so much brain effort into getting school underway once again, that you've exhausted your normal blog creativity a bit. :)

Yes, sometimes we need a little break, don't we? I would have taken a picture of that school bus, too. I think they are beautiful! I might knit tonight. I have been away from it for a few weeks.

Dear Kim, we all go through moments like that but when you have energy you work so hard that I think you burn yourself out without realizing it.

You need a bit of just letting house work go and only do the necessary.

I've stopped blogging everyday because it's too time consuming and I don't even have time to hook anymore. I still read and post comments but that too is time consuming.

Take care of yourself dear friend and take a break, it's OK. Big Hugs, JB

Bloggers block hits us all from time to time. Yet you still shared lots of interesting tidbits with us tonight. We always like knowing what you are doing anyway. Have a nice Friday tomorrow. Go do something that creates an obsession!

Hooray! You wrote a post! I'm glad your compy wasn't fried in the storm or something. :-)

That tree is really awesome. I think it's funny that Dad doesn't want to cut his trees the way you don't want to cut your wool. Trees grow back, you know?

Kim
I could have written this post. Well, minus the personal stuff. I just don't feel like yhere's anything interesting enough going on in my life to post right now. And I'm still considered a newbie. I don't think that's a good sign.
Let's hope this passes soon.!

when i can't write or create i tell the hubs "the juices aren't flowing"....but i almost always have a ton to say!!!

Well you've seen how much I've been blogging (finished knits don't count). My brain is dead too. I think it's the weather. The slogging on of the heat when we're all ready for fall... Sooo ready for fall....

I like that you have plenty of other things that keep you busy. By the time I have grandchildren, I hope my life is that full. I want some chickens!

That was my haiku that was published in the 7th grade creative writing 'book' when I was 13. It's the only thing I ever had published and it was a product of severe writer's block. I remember the pressure of trying to come up with something and feeling a bit flip, I threw this on the page. Of course, it was the one that was chosen. I say all of this to let you know Kim that sometimes it's when you think you have nothing to say, that you say the most!

Love your husband's bonsai. What a terrific way to spend your time. And he really did make a silk purse from a sow's ear!

Well girl you write everyday...I can't ever do that...my brain must hold about 1/4 of what yours does...so I can't suggest how to help you...I can't do what you have done...ever. I can't imagine posting each day...but here you are having a fun post

I read a story to Ben and it had bonsai trees in the story and thought of you.

Have a great weekend...my creative friend

yep... I have had that block more than once. Usually it tells me to go about my life and if and when another blog comes along, do it. So far, one has always come along! :)

Yours will too. In the meantime, just hearing what you do in the course of a day would probably make me too tired to blog at all.

I had to chuckle about your kids wondering what's up with you 2... there is life after kids, and sometimes I'm even surprised myself at all the different things we've become interested in.

I have no doubt there is plenty more to come from your pen!

My poor friend,Kim! I hope your mojo returns, wagging its tail behind it! Here mojo. Come back, Mojo! Mojo- Don't make me come out there and get you. Perhaps I need to jump on a plane and come help you look for it! You just can't get good mojoes these days! Hugs- Patrice

Kim, I thought it was just me that didn't feel like writing. I have the September blahs where I am exhausted from this drought. I think it's really neat that Ron is doing the bonsai thing. I have bought a million of them because I think they are cute but I kill them shortly thereafter. He is extremely talented. Will has his metal detecting, Ron has his bonsai's and you and I have blocks. Love you and miss you.

Kim, you are never boring, and I would so love to write like you! I don't write everyday, because I feel like my posts are always boring..lol
Your posts and photos are always great!
Hugs,
Sue