Buzzard on The Light Pole 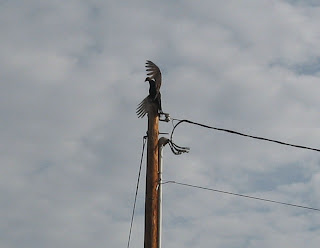 I have never thought of myself as superstitious, but yesterday when this buzzard flew in and landed on the light pole in our yard, I was having some pretty weird thoughts. There were three of them on the light poles and they were standing with their wings out like this in the picture. (note to self, new camera.) They stood like this for so long. I was outside watching and the local T.V. station camera man saw them and stopped with his news camera and took pictures too.
He made so much noise though they flew away and spent the rest of the day in the trees next door. Sort of like sentinels. I was hoping they would decide to nest and move in. Later in the afternoon I walked outside and they were gone.

My daughter who is my bird expert said this, "That is a buzzard basking. Buzzards and vultures are kind of weird, in that they're mostly
solar-powered. They don't warm up very easily, and their flight muscles
are kind of weak. So in the mornings they have to warm up in the
sunlight with their wings out like that to get enough energy to fly."

As they stood on top of the power pole, they reminded me of gargoyles standing on top of a old church tower looking down. I did feel very blessed in that my start to the new year was something that only God could arrange. :)
Posted by Farm Girl at 7:17 AM

Nifty comment box in a new window! Anyway, you sure got neat pictures. That's kind of creepy that they'd stand on three different poles like that. Happy new year to you, with your Close Encounters of the Bird Kind.

It is so cool too. I just look at them and I can see which ones are new. I got it from the blogger part and just used the html box. I am sure if you looked around you could find it on your site stuff. It is just a gadget on blogger.