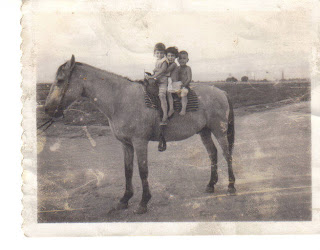 My husband wanted me to start a new feature on my blog.
I was telling him some story from my childhood and he was
laughing at something and he said, " You really need to write
these things down." So I thought today, I would start with
this very first post and one of the few pictures I have
of growing up out here.
The picture is of me in front, my cousin behind me and my brother
in back. The horse is named Buck. More about this episode later.
If you look in the distance in the picture it looks pretty vacant.
When my Grandparents bought this land, town had not grown
to meet it yet. This is 1962 and this land was in a section that had
been a truck farm. When my grandparents bought it was then
a dog training facility. The owners raised hunting dogs, and where
the barn was then was a kennel with lots of dogs.
My mom threatened death to me if I went down to the kennel to
try and pet dogs. I had never seen my mother quite so forceful before,
I obeyed.
The out buildings had been used to raise birds to train the dogs so every
building was a foot at least in manure. I remember my mother and grandmother
shoveling each of the out buildings.
To me as a four year old it was heaven. There was so much to do and so much
to watch and tree houses in so many of the trees. We moved in November
of that year. The house was heated by the gas wells that surrounded the place.
It was a Friday when the man who owned the oil lease came to my parents
and I remember standing in the yard, we were all sick with colds or something.
My mom was holding my sister who was only about a year or so, my brother
was about 18 months and I was four. He was telling my parents that he was going
to turn off the natural gas to the house because, " his wells needed it that weekend
because it was going to be cold." I think at that point in my life, I never knew about
mean people. I watched as my parents begged him to not do that but he was adamant.
My Mom was crying as we walked into the house. It was a cold house too,
it was drafty and it had the high ceilings. My Mom and Dad loaded us up and
we went to Montgomery Wards and they bought a tiny floor heater.
They put it in the bathroom and for that weekend, we all slept in the same bed.
I thought it was great. I don't remember being cold. By Monday, my Dad had
called the butane company and we had butane to heat the house.

Years later when I was in high school, I was walking home from the bus stop, when
that man who had to have the natural gas for his wells was working on a well as I walked
by, he stared a bit and then called to me. I stopped and walked up to him, and by now
he was a older man. He asked me if I was my Dad's oldest daughter." I said" yes, I was,"
He said, "Do you remember the day when I turned off the gas? I replied "that
Yes, I did." He said, " It has haunted me all of these years, your Mom begging me, and
all of you kids being sick." With tears in his eyes, He said, " I don't know if you guys have heard,
but I have cancer and I don't have long for this world. I was wondering, I know it
is to late to ask your Mom (she was already in heaven by this time.)but would you ask
your Dad if he will forgive me?" I said, " I would" and as I walked home, I pondered
that, I told my Dad later when he got home, Dad asked me where I had seen the man and
I told him and my Dad went the next day and found him and told him face to face
that yes, he was forgiven, and Dad asked him if he knew Jesus, and he replied that he
had just met Him so he knew where he was going and he still had some unfinished
business to attend too. It wasn't long before we heard of his home going. Often people
talked about him being the meanest man ever born that all he ever cared about was
his oil wells and his cows. I know that wasn't true because it takes a big man
to ask forgiveness like that. I am thankful that I was given that birds eye view,
and I am glad that there is forgiveness in our world. It is never too late.
Happy Tuesday!

Wow, what a cool story. I can't believe he did that in the first place though, how cruel.

I LOVE this new section. I always enjoy hearing your stories. :)

I have goosebumps! I marvel at the way God can melt even the coldest heart. Every story has a happy ending when God's hand is in it...

Bwahahah, I've been shown how to comment! After following you for a year you'd be appalled how I couldn't figure it out. Ron was so right, you need to tell these stories because those living on Mohawk road today don't know what you know! I love the old photo too!

Thanks your your kind comments. I think that it is good to be able to tell as Paul Harvey said, " the rest of the story." I think with every hard, unexplainable thing that happens in life if we look hard enough, there is a cloud with a silver lining. When there is God there is always hope.

Wow, I've never heard that story before. Thanks for sharing. :-)

KIM...
no one has touched my HEART like you have!
You are my new dear friend forever :)

What a precious story this is! Even mean cruel people can turn to Jesus and want to reach out to those they have harmed, asking for forgiveness. I think your dad showed a lot of mercy and forgiveness himself to someone who had wronged his young family. What a lesson this is.
I LOVE YOUR STORIES!!!
Keep 'em coming.......please.
Love, Cindy

Sometimes when we least expect it life has a way of changing our hearts and I'm so glad that this man did just that.