Berries From The Vine 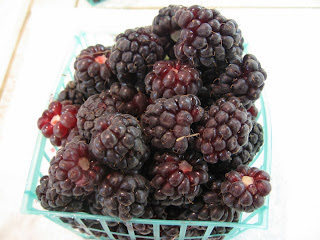 I picked these and I can't wait to turn them into
a cobbler.
This is Tuesday and I am supposed to have a
Tales from Mohawk Road post. I have sat down
at the computer and I am hoping for some inspiration.
I thought I would tell you some back ground of the area
first.
I have the original land deed with the name of the people who homesteaded this land. They owned the whole 160 acres and then they
parceled it out piece by piece. The parcel that my grandparents
bought was a 10 acre parcel. In this place I now live, it is
part of 80 acre section that is divided now into all different size
parcels. My Grandparents parceled this land into 2 1/2 acres parcels
My brother and sister own the parcels on one side of me and the other
side which was my mothers parcel was sold after her death when
my Dad remarried and we moved away.
I always think how weird it is to have lived so many other places and
then after my grandparents death to find out they left it to us and now
I am back.
When we moved here originally, it was the middle of a sewer farm.
That was across the road and farmers leased the land from the Sanitation District. They could plant crops for seed.There are still these huge pond
looking things that used to be filled with sewer water. We used to
walk up there and throw rocks in the water and watch the birds
that made the place home. There would be in the fall, Canadian geese,
swans, ducks and other kinds that I didn't know the name of.
There were so many frogs that sometimes you couldn't sit outside
and talk because of the sound. It was still considered country and
mostly farmland. When we first moved here there was even a dairy.
We rode our horses all over the place out here and one time we rode
up on the bank of where the sewer ponds were and there was a couple
with a small boat. They were launching it into as Hank the Cowdog says, " the
emerald pond."
We were on our horses watching, laughing our heads off.
Finally the people paddled over in the boat and wanted to know,
what " you fool kids are laughing about." Me being the oldest,
piped up and said, " Do you know what kind of water you are in?"
They look kind of blank at each other for a minute. They say, "
isn't this just a pond.?" We start laughing again and when we
could get our breath we say, " it's a sewer pond."
The people paddle away and we watched them trying to get the boat
out of the water and not get any water on them or step on the yukky
sides of the bank, because well, the bank was pretty bad.

The place out here was also a giant oil field and there was oil wells
everywhere. The only people we saw in the summer was just the
men who took care of those wells. The city has grown so much and
the neighborhoods around us are built on the places where there
were oilfields and oil wells and I always wonder if the people who
bought those houses were told what the place was first.
When we first built this house and the city appraiser came out to
do a walk through, kept calling this house, " Our dream house,"
I kept looking at her and wondering why she kept saying that,
finally I asked her why she called it that. " She said, well, because
you over built for the neighborhood. I looked out across the road,
and yes, there is a bare field that is brown and about a mile away
you can see a oil refinery, and next to that is a gas plant, but beyond
that you can see the mountains and the foothills and I can see the sun
rise and the sunset. I can go out and walk in the pasture and I can
have a farm and in five minutes I am at a shopping center.
The trees are the ones I climbed as a child, the trees are the ones
my children climbed and now my grandchildren can climb the same
trees when they are bigger.
The giant tree in my front yard is the tree that I sat under the branches
and dreamed, I built a tree house, then my son built a tree house and
someday the grandchildren can build a tree house.
I am thankful that God does impossible things and
When life doesn't make sense, God always does.

I still love that story. I always laugh at the thought of the people in the sewer pond.

Also, even if you did overbuild for the neighborhood, everybody wants the house! So you did something desirable, even if the local snooty real estate people don't get it.

And the berries look delicious. Any cobbler you make will be gone within hours.

I think my favorite part about your house and land is all the stories that go along with it. It's not just some plot of land that you bought to build a house on with no care. It's a piece of who you are and I love that.

Are you making that cobbler on Wednesday by any chance...? :P

Also, I had a dream that I covered Sasha in butter so that she wouldn't get sunburned (doesn't make sense to me either!), then had to give her a bath. Completely unrelated, but just thought you should know in case I come over with a case of butter....

Okay Meg, I will make sure when you come in that you have no hidden butter. :) How weird, but Sasha might like it.

I had not planned on making any cobbler yet, with all of the birthdays we have had lately, I think we have had to much sugar around here.
See you both tomorrow.

I like the idea that the trees you climbed, your children climbed, and your grandchildren can climb. It makes the fact that your son's wedding reception was under that big tree an extra special memory.