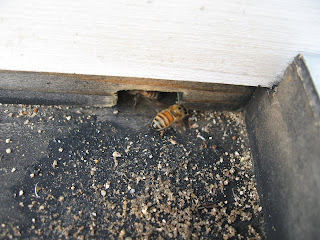 You might not be able to see what Miss Bee is doing
but she was cleaning her hive. She was pushing out
all of these tiny little rocks. Some bee
on the inside would push some dirt out to her and then she
would take the tiny rocks and dirt and push them off onto
the ground. It was to cold to go fly around and get pollen,
so they were busy cleaning the hive.
I stood there and watched and watched. It was amazing to me.
One thing I did notice that they pushed out was some
big things that were some kind of bee, but not a honey bee.
There were two of those dead as can be(e).

So today, I did spring cleaning too. I stood on top of a ladder, and
cleaned the top of my wall unit, and cleaned tops of fan blades and
I was so lazy I didn't feel like going out to the garage and getting my
hand vacuum to do the top of the wall unit. So I got the bright idea
to take my upright and put it on the metal thing that keeps the ladder
from collapsing. I stuck the wheel down in the space between the steps
and the metal thing it was resting on.

I thought to myself, If I fall, man this is going to be ugly. My younger boys
were outside and my two college kids were still at school and my husband was
as work so I felt pretty safe at my stunt. Then I started hearing my daughter's
voice in my head. " Mom!!! What are you doing!!! I started laughing because I
could just see her coming in the back door and having a fit.

I did get it all cleaned and I didn't fall, now tomorrow is the job I hate, cleaning
these shelves at the top of the stairs. It means I jump from one side to the other.
I hate cleaning that shelf so it only gets done about twice a year. I am scared of
heights. I never was until I went up into a windmill in Holland, Michigan. I got to the top
of that then I couldn't get down. I had to crawl all the way down. In front of tons of people.
that were there for the tulip festival. Ever since then, getting on a ladder is so hard for me.
But it is almost spring, so some things just must be done.

Good grief, Mom! Talk about heart attack! I think I'd have freaked out if I was there, too!

That's really neat about the bees. I wonder how the dirt gets in there? The wind, or dirty bees?

Hahaha! How creative of you. :)

I would be terrified of jumping to that shelf too. That's a long way.