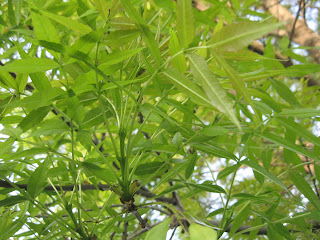 I just had to take a picture of the green leaves, on
the ash tree in the back yard. I find that I just stand
and stare at them. The way they blow in the wind
just mesmerizes me. I guess I have a thing about
trees, just like I do flowers.
I know its only Saturday, but my thoughts are on
Palm Sunday tomorrow. I love Palm Sunday, just
because for me it is the first time Jesus openly
announced to the world He was the ruler over all.

What it reminds me of is when we have rejoiced over
something wonderful that has happened, then boom,
the world comes crashing in a few days later.
I always imagine the disciples, and how they were
probably excited about Palm Sunday, then by the
next week, everything they had put their hopes in
was gone.
"God has chosen the weak things of the world to
put
to shame the things which are mighty.
1 Corinthians 1:27

A book I love is called A Path Through Suffering,
by Elisabeth Elliot. This is from page 192:

"All that the world so desperately seeks the Lamb won,
not by aggression but by surrender. That is the principle
of the cross.
It takes the weak and makes them strong. It takes our sin and bestows
Christ's righteousness.
Out of bondage we are made free. Darkness is overcome by light.
Loss turns into gain."

I can't begin to explain all that I think happened on Holy Week, because
I think there was much more going on than just Jesus dying on the
cross. I think that someday, we will see behind the scenes and
when God died on that cross, we will see how huge the victory
really was. That by the end of the week and there was a empty
tomb. When I was a little girl, I was eleven, my first Mom died,
( I am blessed to have had two.) I remember standing at the casket
looking down at her, I knew in my heart of hearts, as Jesus did
with Lazarus He could have made her alive. I knew it. But, He
chose not to because His plan was much greater than I could
ever know. As I stood there I placed all of my faith, what little
I had in heaven at that moment and that I would see her again.

Would I have ever had what I have today, if on that day, when I felt
my life was over? Because of that day, the choices I made have
all been because of that moment. Can I say, it was a victory?
Yes it was, and I am very thankful for it all. Holy Week for me
becomes a victory in that death was defeated, and a fairy tale
really does come true. Happy Saturday!