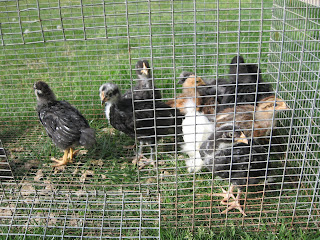 I was watching my chicks, and I made some observations.
I took them out in the cage and put them on the nice
green lawn. I put the little door down thinking that
they would hop out and run and flap their wings.

They didn't. They would flap their wings and go from
side to side and up and down and hit their heads on the
top of the cage, but would not leave the confines of the cage.

I was puzzling over this and I went inside and got the water,
the food and a plate of grit. I put it out in the grass and watched
some more. A few brave souls would venture out to the edge of
the door but would turn around and run back in.

As I sat there I found myself asking, " why won't you trust me?"
I said those words to myself then it hit me. I am just like those chicks
I live that way so often, being afraid to try new things. Always,
God is standing near, saying to me, " Will you trust me." It sort of hit
me hard. I find I hold onto things to tightly, my life, my kids, my husband
even to fear itself, because of being like the chicks and leaving it all
and trusting my life to God.

C.S. Lewis said, "
We are half-hearted creatures, fooling about with drink and sex and ambition when infinite joy is offered us, like an ignorant child who wants to go on making mud pies in a slum because he cannot imagine what is meant by the offer of a holiday at the sea. We are far too easily pleased.”
The Weight of Glory and other addresses, by C.S. Lewis. (The Macmillian Company, New York 1949).

I just love that and today I decided no more cage and took each chick out and put them on the grass. I wondered then am I like that too? God has such amazing plans that He has to reach out sometimes and bring trials, and other things, because I refuse to move.
That is what having chicks does, it makes me sit and ponder life.
I hope your week is a lovely one. Happy Monday!

Good Morning Kim,
What a great analogy, I agree and have experienced it in my life so many times about God allowing circumstances to come to bring about His will for my life.You would think I would get it after awhile.lol

And like you God teaches me so much with our animals.
Great quote from C.S. Lewis, so true.
Enjoy your day.
Hugs,
Sue

Your chicks are so sweet. You will have such a good time watching them grow. It amazes me how they each have a personality. Some are just happy to be chickens....and some aspire to so much more!

Have a great week
bev

Good illustration! I feel I live that way, too.