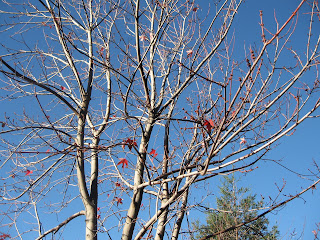 I haven't done a Thankful Thursday in awhile. I was visiting
over at Dawn's place and she had a post about her bucket list.
I was writing to her my comment. When I thought about how
I felt standing by my Mom's bedside that last time. Since it has
been a year, maybe I can tell you a bit about her. When I think of
her I think of a woman who sacrificed for others and always putting
others before herself.

My Mom was my second Mom. My own Mother died when I was 11
in 1969, my Dad remarried in February 1970. She went from having
3 sons to having six kids and for the first time two daughters.
Because my brother and my sister and me were still walking around in
a case of shell shock, she decided to move into our house. With my Mother's
things so as to not disrupt our lives to much.

We kids lived in the house, in the warm house. My Mom and Dad slept on the patio
under tin roof, in the cold while we fought it out in the house. Everyday before we
got on the school bus there must have been 5 fights. So I guess it was good they
were outside. We finally became a blended family.

One thing she did was my sister and I and my cousin all rode horses, all the time.
She had always lived in town. She was so scared about us going off out in the fields
for hours she thought she could understand if she got a horse and went with us.
Only it was so hard on us because she was so scared she shook so bad the horse would
get nutty, and we were so afraid she would get hurt. We finally talked her out of
it because she was so afraid. We would just ride home more often and tell her
where we were.

She took care of my Dad when he was sick. He was so hard to take care of. He got
so mean but she never lost her temper and she was always kind. She never complained.
She was sick too, but when I asked her if she shouldn't go to the doctor too, she said,
" She had her hands to full to worry about herself."

Finally after my Dad died, and she was left with such a mess. She didn't want to
have things passed on to us so she worked at my Dad's little store until she was
able to save and get money in the bank and pay back things. We didn't know this
until she died.

She kept getting sicker, she ended up having 31 surgeries. I think somehow, if she
had had bad insurance they might not have cut on her so much. When I would call
her and ask her how she was she would say, " Oh let's not talk about me, tell me
what is going on in your life."

The one thing that gets to me the most still, is this. We were all going to go back
for her birthday. When we had told her what time we were all getting there.
She was home by herself. She wanted us to go to her house and have it look
all pretty. So she got up and drove into town. She lived about 30 miles from
town. She bought new towels and a new shower curtain and all of the things
that she thought made guests feel welcome. She drove all the way back home
by herself. The next day she went in the hospital.

I wish you blessings upon blessing today,

I'm so selfish, I'm afraid I'll never be able to sacrifice that way. But I think it begins with the little tiny sacrifices that nobody sees. So by the time you're older, you can move on to the big things. In theory, anyway. God has a lot more work to do on me.

Oh wow, Kim. I had no idea when you talk about "Mom" she was your 2nd mom. And such a wonderful, giving, selfless woman. She would be proud that just your memory of her can bring tears to people who never knew her but love her anyway...

What a beautiful legacy Kim... 2 mothers who loved you and modeled grace and giving in your home. You are blessed.

These are beautiful expressions of what I also see in your life.

Oh Kim what a wonderful gift you were given in that you had TWO wonderful mom's...this brought tears to my eyes. It isn't often you come across such a selfless person. Imagine doing ALL of that the day before you have to check into the hospital. What memories you have, and what an influence she had. Enjoy your day today. HUGS

Kim,
Somedays I just do not have the words to match your beautiful posts! Your "Mom" was obviously a very special angel and sent to you for a reason.
What a wonderful story to share with us - it has moved me beyond words.

What a sweetly told touching story!

What a beautiful story...or should I say memory. What a wonderful woman she must have been, you were truly blessed!! Dianntha

Kim...just beautiful! So much to learn from her life, for everyone. She reminds me of my Uncle's new wife that picked up after my Aunt died and she too has done the same for my two cousins.
We can never understand His ways, but you do see His loving hand through all of this. I am so sorry you have lost two mothers, but I also praise the one who has comforted you through this time and given you such wonderful examples of Godly women.

What a blessing your two Moms were. They left a wonderful legacy!

oh Kim. Through the hardships, you have been so blessed.