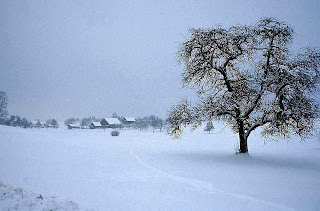 One year, we were invited to
a new church for their Christmas pageant. The kids
were all dressed up and we were excited as we had heard
how pretty the music was and the orchestra and the choir.
So we went into the church and it was packed and we were looking
for seats, and people were saving seats for others, and the pastor
was pleading for people to sit closer together. But, no one
would move and for us there was no room in the church to see
the pageant. So we left. On the way home we talked to our
young family how it felt to have no room in the inn. How
the son God had to be born in a stable. Because no one would
make room for God. Our little children suddenly understood
What that meant in a new way. I love it when real life gives us
stories.

Trouble At The Inn

Wally was nine that year and in the second grade,
though he should have been in the fourth. Most people in town
knew that he had difficulty in keeping up. He was big and clumsy, slow in
movement and mind. Still, Wally was well liked by the other children in his class, all
of whom were smaller than he, though the boys had trouble hiding their irritation when
Wally would ask to play ball with them---or play any game for that matter in which winning
was most important.

Most often they would find a way to keep him out, but Wally would hang around anyway---not
sulking, just hoping. He was always a helpful boy, a willing and smiling
one, and the natural protector, paradoxically, the underdog. Sometimes if the older boys chased the younger ones away, it would always be Wally who'd say, "Can't they stay? They're no bother."

Wally fancied the idea of being a shepherd with a flute in the Christmas pageant that
year, but the play's director, Miss Lumbard, assigned him to a more important role.
After all, she reasoned, the innkeeper did not have too many lines and Wally's size would
make his refusal of lodgings to Joseph more forceful. 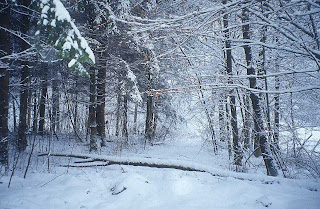 And so it happened that the usual large audience gathered for the town's yearly
extravaganza of creches, beards, crowns, halos and a whole stage full of squeaky voices.
No one on stage or off was more caught up in the magic of the night than Wallace Purling.
They said later that he stood in the wings and watched the performance with such fascination
that from time to time Miss Lumbard had to make sure he didn't wander onstage before
his cue.

Then the time came when Joseph appeared, slowly, tenderly guiding Mary to the door of the inn.
Joseph knocked hard on the wooden door set into the painted backdrop. Wally the Innkeeper
was there, waiting.
"What do you want?" demanded Wally, swinging the door open with a brusque gesture.
"We seek lodging."
"Seek it elsewhere." Wally looked straight ahead but spoke vigorously. "The inn is filled."
"Sir, we have asked everywhere in vain. We have traveled far and are very weary."
"There is no room in this inn for you." Wally looked properly stern.
"Please, good innkeeper, this is my wife, Mary. She is heavy with child and needs a place to rest.
Surely you must have some small corner for her. She is so tired."
Now, for the first time, the Innkeeper relaxed his stiff stance and looked down at Mary.
With that, there was a long pause, long enough to make the audience a bit tense with
embarrassment.
"No! Be gone!" the prompter whispered from the wings.
"No!" Wally repeated automatically. "Be gone!

Joseph placed his arm around Mary and Mary laid her head upon her husband's shoulder and the two of them started to move away. The Innkeeper did not return inside his inn, however.
Wally stood there in in the doorway, watching the forlorn couple. His mouth was open, his brow
creased with concern, his eyes filling unmistakably with tears.

And suddenly this Christmas pageant became different from all others.
"Don't go, Joseph," Wally called out. "Bring Mary back." And Wallace Purling's
face grew into a bright smile. "You can have my room."

---Christmas Stories for the Heart---
written by Dina Donohue
Images from Free Snow Pictures.
We never have snow.
Posted by Farm Girl at 4:23 PM

I love your post, no room at the play is a great comparison to the Inn!
kim
ps Saw your wonderful comment on another blog?

That was really sweet...

And thanks for explaining the snow pictures! I was worried you got Minnesota's forecast! :)

There is nothing like an experience to teach us something. Thanks for the story of Trouble at the Inn. First I thought that you were talking as if Wally was your son until I came to the end of the story. Always enjoy your short stories. JB

Your Christmas story tonight is so sweet. We need more sweet souls like Wally in the world.

very sweet. i love the "free snow pics"...heehee! Very seasonal ;) i would love your kind of christmas...warm and dry :)

Great story. As I was reading I was asking myself if you might have written it. I was a bit curious about the snow pictures. I didn't think you had snow where you are, but I wasn't sure. Have a beautiful Sunday!

Sorry you missed the pageant, but you were wise to use it as a teaching moment. Sweet story...I had a feeling the kind Wally was not going to turn them away! I, too, was wondering if the pictures were from your area. Neat idea...makes your post look "Christmasy" ! :-) I'm loving the stories...keep 'em coming!

I've been reading over your posts for the past week. I'm so sorry about the loss of your mom. It's obvious you loved her very much and she was a loving and giving woman. What a beautiful tribute to her. I've loved the stories you shared. I hadn't read the Christmas story about the 15yo boy in quite awhile...I loved it.
This story was so sweet too :-)
Blessings,
Marcia

Aww, this one and Candle in the Forest are probably my favorite Christmas stories. I remember there being no room for us to see that pageant, too. Such a lost feeling.

Aww, what a sweet story!

I'm starting to feel like society has no room at the inn for Christians anymore.

That's a cute story. I liked Wally the more you told about him.

I got chills. What a great story. I just love Wallace Purling :)
Hugs, Amy