Raining, Raining All Around 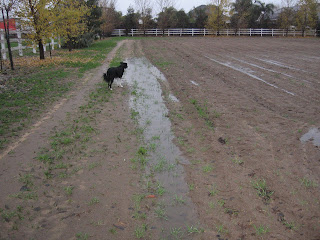 It has now rained since Wednesday. I have never seen it
rain here like it has this weekend. You expect it if I was say in
Seattle Washington. Our dirt in our pasture is river bottom and
really sandy. To have standing water sort of tells you how much rain
we have. I was reading about a place that already had 11 inches as of
yesterday afternoon. It has broke the records set of this area in 1921.

It is supposed to keep raining like this until Friday. They started handing
out sand bags. My daughter said today that she drove by a park and it
looked like a lake and it was full of cattle egrets. She said it looked so pretty.
I am going to see if I can get down there tomorrow to take a picture.

We were having lunch together today when all of a sudden a car on the road
out in front of the house spun out and I thought he was going to roll and hit our
fence but managed to get out of the spin. 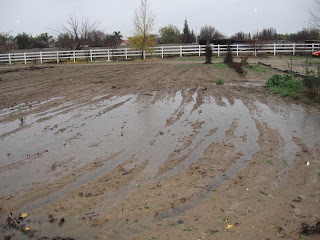 This is some more of the pasture and it is where our
garden is in the spring. My daughter said at work today
one thing she noticed was how afraid people were, and
she wanted to know why were they so afraid.
I told it because it is not what we are used to and we
can't control it and this is just what I think we don't really
have weather here very often. We aren't prepared for it
either. So because living under the illusion we can control things
around us, when we can't it makes us feel afraid. 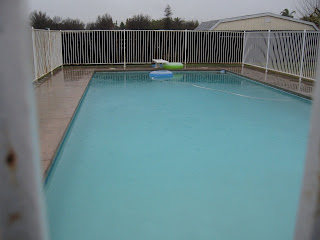 Our swimming pool is to the very top. I don't know if it
will go over the sides but it looks so funny to be that filled
up to the top. I think what bothers me the most is what
will it turn into as it moves across the nation. So often
when we have a terrible storm here, it changes into a monster
as it goes across the U.S.

Tonight the storm begins to get colder and the snow levels will
begin to drop. We haven't had snow in 15 years so maybe this
is the year.

I hope your weekend has been a restful one, I have started the
Christmas count down in my head. With each day having a list
of it's own to be accomplished. I am so glad that Christmas Day
is on a Saturday.

We had terrible winds and rain a week ago. Our town wasn't to bad but a couple hours away had massive flooding damage. I hope it dries up for you soon. There is enough to keep you busy this time of year, without worrying about wild weather.
Plus, we wouldn't want Santa to hyro-plane on all that water!

I hope you don't have a lot of damage and everyone stays safe. Can you imagine how much it would be if it was snow!They say that 1 inch of rain = 1 foot of snow. Maybe the rain isn't so bad after all. Hmm?!?!?

I have it on good authority that Santa has Muck boots.

They expect 15 to 20 feet in the mountains this weekend. It is to bad I am not a skier anymore, I would be celebrating. A 10 foot base I mean wow, that is incredible.

There is so much water around our shed that it's starting to look like a house boat!

I was LOVING the rain until today when we found quite a few leaks and wet spots on our ceilings. Oy. Still excited for rain, but pray that those leaks magically seal up! Ben did what he could with buckets today. Looks like we'll be putting off paying the car early for a roof this next year. Don't think we'll make another rainy season. Not sure we'll make it through this one if it keeps going like this! :(

Sorry about your rainy weather Kim, we had a flood here and were stranded from the main road. Our basement flooded and I just started the clean up this afternoon. On Wednesday my husband and I went to help a farmer up country that lost about 3/4 of his hay silage when his round bales floated away and his barns also flooded. We worked cleaning up all day until it was time to do our own barn work. Our farm was spared but the water came right to the drain in the milking parlor. We couldn't even clean the floors in the milk house or milking parlor.

What a beautiful pool Kim, hope that the pool doesn't over flow.
Thanks for your email Kim, I appreciate it. JB

Wow! I hope it has a chance to drain off soon for you there - but like you said, it may head to the east and cause more havoc.

wow. that's a LOT of rain. we could sure use some
here and probably will get your weather pattern
in a few days. thanks for the heads' up. :)

do you have high ground to run to, if it keeps up?

ohmygosh, that is a lot of rain! I hope you don't have problems because of it.

We are dry here...we more than need the rain, probably not that much. I hope you all stay safe.
Blessings this week....enjoy!! Merry Christmas!!!

Yes I am becoming a little tired of all the rain too. It took my poor son 3 hours to get up here from San Diego Friday. (it is usually a 1 hour and 15 min. drive...) Unfornately some people in California really don't know how to drive in weather of any sort. Sooo many accidents. We stayed in all week-end but I've things to do today...sigh....BUT it could be soo much worse...it could be lots and lots of snow....We are starting to get HUGE puddles around here too. Where we used to live in Upland we sat at the base of the mountain and we REALLY got the weather. Much colder and always more rain than anyone else. Our swimming pool overflowed a couple of times. Stay dry over there. Have a good day...HUGS

Dang, that is a ton of rain. I have ween worried about you guys, driving around on flooded roads. I'm also somewhat worried about whether the water has reached our apartment door yet. I'll email our neighbor and find out.