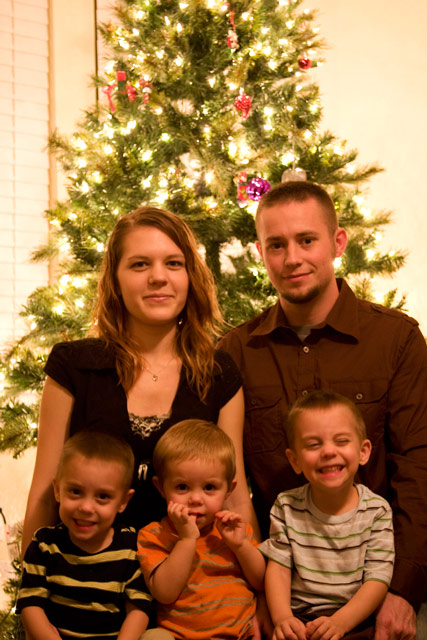 Today my son is 25, I can't believe that time has passed by so fast.
His name is Benjamin and he has always been"The son of our right hand."
Do I brag about how he has a great wife and they have given me 3 lovely
grandchildren? That his talents and gifts still amaze me. I am glad I was there
that day he was born. I might think someone switched babies. I am
so proud of the man he is and I am so thankful that God has blessed me
with him.

Now a story, you didn't think I could not tell a story. When I was pregnant
with him it was an economy pretty much like it is now. Only we were so poor
we didn't notice it. My husband had decided to go into business for himself and
we always did okay, just enough to keep the wolf away from the door. We were
brand new Christians and we wanted to test this God thing out to see if God would
hear and answer our prayers. It was like a crash course I think.

I was in a woman's bible study at the time and I was learning so much about the Bible
and the teaching leader talked about writing down your prayer requests and getting on
your knees and lifting them up in prayer. So we started doing that and God would
bring in just enough work so we would have just enough to buy food, pay bills and no more.

My husband was doing a big project of a man who had an idea. We had all of this
equipment in our bedroom which served as a office and they would work in there and
this project was unique. Now it is pretty standard but then no one had ever done it before.
When my husband had finally got all of the equipment programmed and working and ready
to go, he got a phone call telling him his friend had been killed.
It was a terrible thing not only because he left a young family but we had all of this
equipment and what were we going to do with it. My husband talked to widow and she told
him to sell what he could.
Now this is the weird part that I still wonder about. We were broke but we got about 25 dollars
together to put an add in a magazine called Oil World or something like that with
our phone number. But they made a mistake and put in the wrong area code. We didn't
have any more money to run another add.

Then out of the blue a man from Tulsa, Oklahoma calls us on the phone and wants to come
see what we had. Only at this time, I was in labor with my son. If I could have stopped it I
would have we needed money so bad. He said he would call back at a later time.

Now I was in the hospital after I had my son and in those days you had to pay 5.00 dollars
to turn on the T.V and the gal in the room was as poor as me and between us both we couldn't
scrape up that much. We both laughed when the guy came in and he looked so shocked at us
that he said, he would turn it on anyway. But the thing was as we held our sons, and we talked
she ended up rededicating her life in the hospital. We didn't need a T.V.

When I went home from the hospital, it was cold and foggy. My husband had spent hours
out trying to rustle up work but everyone was waiting before they said yes to spending money.
It was starting to get scary but we had decided we would continue to get on our knees each
morning and lay out our needs before God and if He was who He said he was we
would be okay. On that final morning, I had one box
of cornmeal in the cupboard, one egg, a little milk and two heels of bread. I fixed
cornmeal mush that morning for breakfast and I was scared because I didn't know how
far I could stretch the milk.
We got a phone call that morning and it was the man from Tulsa, He wanted to know if
he could see the program and the equipment. My husband called a man who had
a nice office and took the stuff down to his place. All the while I am praying what
was I going to do as I didn't have food for lunch.

My husband called a few hours later and he was bringing the husband and his wife home
to look at the equipment. They came in and looked at the equipment and we sat in the
living room while the men talked and I rocked my son and all of a sudden the man
from Tulsa says, " I will take it all, the equipment and the programs and he took out his wallet
and started counting 1oo dollar bills across the top of our coffee table, 17 of them.

Then they walked out, we just sat there, staring. My husband called his friends widow,
and told her and she needed money too. So that day God blessed two families.
My husband said, " I don't get it, I couldn't get the program to work."
I have always thought that really that man from Tulsa and his wife were really angels in disguise.

So 25 years ago almost to the day, God sent those people to our house and we knew without
a doubt God was real and He did answer prayers.

I always think what was we did was we got in our orange Volkswagen with two baby seats
in the back and went to the store and we bought a can of tuna, a bag of Doritos and a loaf of bread and a bottle of Dr. Pepper to celebrate. Nothing has ever tasted so good.

I love this in so many ways...my second born will turn 25 soon, and my last one is Benjamin!
I would love for my married son and his wife to read this...they are in business for themselves...no children, but still your testimony to God's faithfulness is encouraging to all business owners.
I have seen His faithfulness in this way...only our journey came years into our marriage with five children at home.
Thanks for sharing your testimony...it increases my faith and the power of prayer.
Happy Birthday to your son...what a precious family!!!

It is amazing how sometimes, at our darkest hour something wonderful happens. I had a best friend/room-mate in university but after about 5-6 years with us both moving several times etc, we lost touch and had no way to contact each other. I thought of her often. Five years ago, a couple of days before Christmas I got a phone call that another close friend had passed away. I was devastated. An hour later the mail arrived and it was a card and note from my former room-mate. I thought it was more than a coincidence that we would reconnect on that day.
Happy Birthday Benjamin

I'm sitting here crying! I love your stories. We spent so many years of getting just what we needed. God really showed himself to us over and over. Isn't amazing to think of where you are, when you look back to where you came from? You had an orange VW? lol We had (and still have) an OLD blue pick up truck that we named Arnold after the pig, Arnold Ziffle in 'Green Acres.'

That story still makes me smile! I think it's so cool that it all happened when Ben was born.

Wow. Angels indeed. For that man to track you down with the wrong area code and all. And to call back knowing you were otherwise occupied. :)

And OMG, those grandboys are adorable!

i just love God's incredible provisions!! happy birthday to your son...what a beautiful family he has!! much love to you all :)

thanks for ordering a bible study. email me your email address and i will get you the details. (growingodliness@live.com)

I came back because I remembered that I hadn't said Happy Birthday Ben!

Oh Kim, what a wonderful story. I do believe they were angels in disguise. They probably flew away right outside your house. How did he get your number with the wrong area code and all? They were angels for sure. Happy Birthday Ben-you have a beautiful family and a wonderful momma :)

Kim, what a testimony of faith. I guess it's easier to trust in the Lord to provide when we are at the mercy of poverty. It's the time that we feel closer to God when there is no one else to turn to in our needs. What a love little family. Happy Birthday Benjamin. You have a great Mom. JB

I can't imagine a more beautiful birthday tribute to a son! He is blessed! Happy Birthday Benjamin!

What a great testimony of God's provision. is timing is perfect, isn't it? Also a wonderful testimony of your faith...your determination to trust God.Thanks for sharing the story. Our second son is Benjamin...and his name suits him as well!
About the book, my hubby didn't work last night, so I didn't start on it either. Hoping for later tonight!

What a wonderful story of the faithfulness of God... I LOVE hearing stories such as these. Your son and his precious little family are adorable. Happy birthday to him! HUGS