Buzzards On The Light Pole 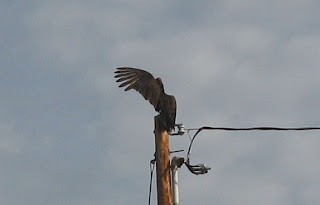 I wanted to share my first post of 2010. It was a
new year and the sun had come out a bit and these
three buzzards came flapping in, one on each light pole
and they stood there and put their wings out and
let their backs stay in the early morning sun. 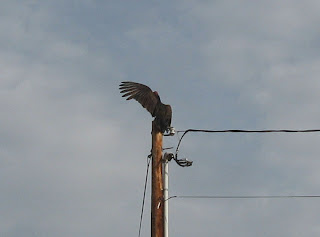 It looks so weird to have these buzzards standing
like sentinels. I walked very close and very slow
so I could get these pictures. As I was out there
a T.V. camera guy showed up with his loud, huge
T.V. camera and took pictures. I wanted to tell him
to leave but I didn't. He did scare them away.
They flew to the top of my sister-in-law's nut tree
and spent the day storing up sunshine.

I found out later that they are kinda solar powered and
they have to do that in order to fly.

I was gone all day shopping so my brain is tired. It was so busy
at our Wal Mart that I thought going in through the garden shop
would be faster. So did a million other people. I had to wait in line
just to get into the store. I just needed some muslin. I almost left
but figured I might as well just get it over with.

I had to run into Target and it was the same way. I started getting
really afraid I might have waited to late for Christmas shopping. It was really early too.
Then of course I had to go to the library and the library grump was
working. I had brought back my five books which she said," Did you
know you have 5 books out already?" I said, yep, I put them in the book
drop, I don't think you... notice... I said you have checked them in yet.
I wasn't in a mood for snarky librarians. She was really nice after that.
Then I felt bad I said, "you", I knew she was busy. I never can be snarky,
it makes me feel so bad.

I hope your weekend is nice.

Dear Kim, I'm having a Buzzard kind of a day myself and need to recharge my solar batteries too. Thanks for sharing these rare pictures.

Hope that your library trips will be less stressful in the future. Have a great weekend Kim.

BTW, thanks for your comment on my blog. I guess that I'm sort of lonely too as I seem to have many evenings alone at home by myself and my computer. Hugs, JB

Haha grumpy librarian. That still amazes me. Maybe she's just shy and doesn't know how to deal with people.

You know, the one time a year I got to Wal-Mart everyone is going through the garden section too. I think it's just Wal-Mart in general.

I kind of wish I was out braving the crowds, too, and then I'm glad I'm not. I went and picked up loads of pine needles today, and I'm making baskets like mad. I only have a week left to make, like, 3. I think I've hit panic mode.

Oh Kim, how funny, I am the same way...I start to be snarky and definitely can be and then I feel guilty beyond belief afterward :) LOL No snarky librarians allowed!! LOL
Wal-mart and Target are packed here too. I am shocked by how many things are gone already and it seems people are getting it done way early. I feel so behind.
Hugs, Amy

I too feel bad if I get a little cranky with others even when they are with me. Makes me think perhaps they have some sort of sadness going on in their lives that just sort of spills over then again some people are just grumpy :)

When my parents owned a restaurant (back when I was really young), an elderly couple came in a few times a week to eat supper. The gentleman was so nice, but his wife was so crabby. I decided that the crabbier she was, the nicer I would be. Eventually, she became less crabby and more nice. That was always my 'game' when I worked with the public. Helped me not be negative about my day.

Buzzards...I had some out here, once. Not pretty birds. At all.

Hi Kim,
I think buzzards are so majestic when flying, it is hard for me to believe that something so pretty good eat the stuff they do.lol And like you I feel so bad when I stand up for myself, it is not in my nature to be snarky, but sometimes we just have to be.
Enjoy your day!
Hugs,
Sue

What great pictures but I have a feeling even better seen in person....I know how you feel about "snarky" people. It is soo hard not to get snarky right back. It amazes me how quickly I can become that way sometimes when provoked...sigh...I so seldom am the way I want to be....Have a wonderful week-end. HUGS

Hi Kim:
I have to say you are the nicest person and the best blogger....I don't know who you do it...I can't believe you can post as often as you do and have such fun thing to say...
Have a great weekend, Nancy

I can't imagine you being "snarky"! You are too sweet! Interesting about the buzzards. All I know is that that they are really ugly up close! ha! ha! They do perform a service for us.... just what God intended! Hope you are feeling some better today. Mine is just a cold...it just won't let go! Have a blessed weekend...I'm VERY glad I met you, too!! :-)

It always comes back to bite us, doesn't it!

Thank you for visiting my blog. I see you have some of the same followers as I do. Such wonderful people who have become good friends. The buzzard info was interesting. I didn't know they had to recharge in the sun. Your comments about Walmart and Target made me so happy I skipped them on Thursday. I was going to go to least one of them, but thought better of it. I live in Tehachapi, but perhaps you saw that on my weather widget.--Inger

An honest to goodness live buzzard, I don't believe my ladies would appreciate him/her hanging around their coop! Oh Kim, Walmart is the last place you want to be on the weekend especially this time of year. Oh I feel for ya. I am not a fan of malls or box stores, probably because I never know what I am looking for and If I did I wouldn't know where to find it once in the store. Yes we have some snooty librarians at our library, I just smile I won't stoop to their unfriendly level. Thinking of you.

I thought the library was supposed to be a grump-free zone! You were way nicer than I ever could have been :) My mom always taught me you catch more flies with honey, and you clearly learned that lesson well!