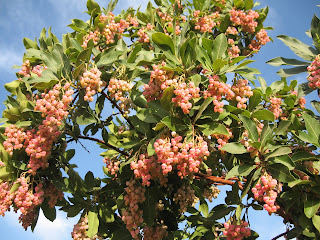 I just had to post a picture of the Strawberry Tree. It is loaded with small berries which I think are the blooms. I couldn't believe how loaded it was, when it has fruit it does looks like funny strawberries. It has never had this much on it before. I think it is due in part to the bees. 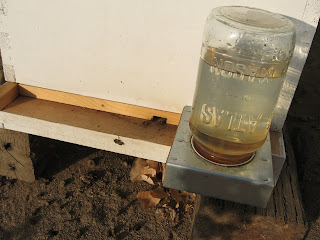 The bees looked really good, except for the black widow we found living in the lowest box with the brood. We took her out and killed her. Her husband was also living there he is dead too. We put in the little stick so that the door way is restricted and maybe they can guard the front door better. Can you see all of the dead bees on the ground? It made me so sad to see so many bodies by the front door, but as I looked close all of the wings were just in shreds. They had worked themselves to death. The hive looked really good and the bottom box was filled with bees. The second box was filled with honey, but that is the honey they need for babies during the winter. The box that we had put on early in the summer was empty so we took it off and put on the winter lid. I bought 50 pounds of sugar today to make syrup for them to eat if they get hungry as there are less and less flowers. I couldn't take pictures of the inside of the hive as I wasn't wearing any protective gear. I just had gloves on. Ron was in the hive looking at each frame.
It is such a new hive, I guess that is why there is just not honey to share just yet. Maybe in the spring.
It makes me look forward to the spring because this year when the trees bloom there will lots of bees to pollinate the blooms. I didn't think I would even think about another garden after I worked so hard this year, but I do have that sneaky feeling I might even have a bigger garden. I do miss it so much.

Have a great Monday!
Posted by Farm Girl at 6:02 AM

If you do do a larger garden, maybe Kess and I can come help harvest now that we're not huge and pregnant.

Then think of the things I could plant!!

Like watermelon! I'll bet you could grow it just fine, seeing as the cantelopes were such a success.

I'm glad to hear that the bees are okay. A black widow in the beehive? If she had snagged the queen, there would have went your whole hive. Darn black widows. They cost me my guinea, you know. :-(

I just never knew they would get in a bee hive. I guess it is something we have to keep our eyes open for all of the time since we seem to have so many black widows.