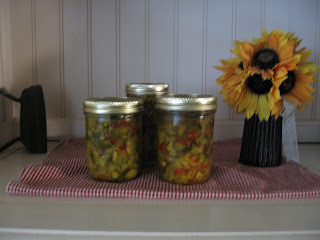 I thought today I would post a picture of my relish.
As I was planning what I would grow for next year,
I know one thing that I have to plant is the ingredients
for Yellow Squash Relish. My Aunt Jimmy's recipe.

My Aunt Jimmy was very unique. She worked until she
was in her late 70's as a home health care nurse. She said
she knew it was time to retire when her patients were
younger than she was. I believe she had 5 husbands
and out lived them all. She also was a foster mother and
lived I think life to the fullest.
After she retired she went into gardening and I believe
had the most beautiful garden ever. She ran
her own produce stand from her front porch and she also
canned.
I am not a big fan of relish and she called one day to tell me
she was selling her relish for 5.00 dollars a jar. She said,
that she couldn't make enough to sell as fast as people were
buying it.
Now not being the least bit interested, I said, well, why don't
you give me the recipe. So she did, and here it is:

Bring to a boil and add vegetables, bring to a boil again and boil 4 to 5 minutes.
Pack into hot jars and seal with jars and rings,
process into water bath canner for 10 minutes.

I can eat this stuff with a spoon and I put it in tuna or eat
it with crackers. I put it in my pinto beans and have been known
to put a little in my cornbread.
I love the stuff. I give it at Christmas and have been told that
they would like more and was even told by a friend she would buy it
for 5.00 dollars a jar. :)
I haven't started selling produce from my front porch yet,
but it might not be a bad idea sometime.
Have a great Tuesday. I hate to brag, but it might
get up to 70 degrees today. Me and the chickens
might have some together time.

If you get as big a crop as you did last year, you'll HAVE to sell it just so it doesn't go to waste.

Yay warm weather! I'm SO excited for spring I hope it gets here soon... to stay!

Oh man, it's the best dang relish. I've been eating it on my beans, and the flavors combine so wonderfully.

I almost wish you could make a batch that was sour, not sweet, because the stage before you add the sugar smells so wonderful. :-)

70 degrees ... YES! I might take the kids to the park today or tomorrow.

Oh yummy...that looks delish!! Oh, how I cannot wait to plant the garden.....just remember, Spring is coming....a bit later for us here in PA, though!! You are so lucky to have warmth....it is frigid here!

Yes, Bev, I was thinking of you and all of that snow! I feel really guilty even though it is hazy here it still is the sun. We are back to rain though this weekend. :)

Hi Kim,
Hope you are feeling much better today!
Your Aunt Jimmy sounds like my kind of girl, this seems like a great recipe. We plant yellow squash,and it really produces a lot, so I am always looking new recipes. I do a lot of canning. If we grow it and I can put it in a jar I will. lol I even have a recipe for squash pie, it is delicious.

It is so wonderful to meet you, I went and checked one of your December post and I believe our homes are almost identical. Yours is beautiful. We have so many windows and I love that as I can see what is going on around me.I am really getting anxious to get out in my gardens, but it looks like it is going to be a few more weeks before I can, but it doesn't hurt to dream.

Your Aunt reminds of my mother, in the sense she is always busy, my mother is 82 and goes like she is 35. The Lord has blessed her to have wonderful health, and she gives Him all the praise for that.

We used to plant a lot of produce for market and had a place on the farm. I really miss it, I got to meet a lot of women and we exchanged a lot of recipes.
I have tried to talk my dear husband in planting more and letting me sell some at the gate to the farm, but he just shakes his head and laughs. He knows I like to be out in my garden puttering, and he would probably end up running it,LOL. I guess when you have been married a while your mate knows you better than you do sometimes.lol
I see you like chickens too, so do I and enjoy them so much.
Enjoy your evening.
Blessings,
Sue