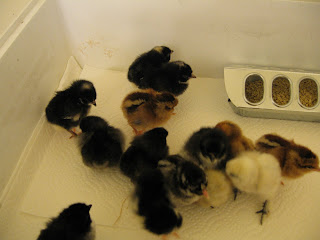 This morning my brother called. (He owns a feed store.)
I had asked him earlier if he was going to get in a
breed of chicken called a Cuckoo Maran. He said, that
he was but that they were hard to get because so
many people want them.
I had got online earlier and thought about ordering eggs
and getting a incubator but decided to ask him.
He said when I talked to him that he didn't expect any
until the end of March or beginning of April. I was okay with that
not really ready for chicks yet. He picks up his chicks at the post
office every Thursday morning.
He called and said that he had 25 Cuckoo Marans did I want some
I said yes, and I would be down to get them.

I got to the feed store and walked into his chicky room and he had so many
other kinds. I kinda went crazy. I got 2 New Jersey Giants, (my very favorite hen.)
4 Cuckoo Marans, 5 Silkies, 1 Silver Laced Wyndotte, 2 Welsummers.

The Marans and the Welsummers both lay really dark brown eggs. That is why
I wanted them. I am so excited. Nothing says spring, like baby chicks.
Happy Friday!

We are raising chickens this year too. First timers.

Silly me, I didn't know you could buy the incubators. Everthing I read suggested that you build you own.

Where did you get your incubator:?

You bought chicks! I thought you were going to wait a few months, ha ha. And you do it the day after I was there! Now I have to wait a whole week to see them.

And just watch, all your silkies will be roosters. All mine always were. :-(

Hey Kessie, I know but Matt called and he didn't know he was getting them in and I wanted them really bad so I went. They are really great today, yesterday must have been really stressful on them because they yelled so much. Today, they are nice and quiet. The thing is I want a silkie rooster. So that is the difference I think.

Hello KIm,
I am so envious of those chicks, but am happy for you. We get or chicks at our local farm center, usually in middle March, I think I will ask him about the Cuckoo Marans, I have not heard of this variety. Sometimes we let a hen hatch out.

I have to tell you I had a good cry when I read your Thankful Thursday post, What a BLESSING you are to your family. And now such a BLESSING to me. What a wonderful blessing to have this special time with your daughter, and your daughter-in-love, also time spent with those beautiful grandchildren.I feel as though I have known you forever. I too sometimes have to pinch myself for all of God's Blessings to me. What an Awesome God we serve!
.
I haven't posted lately, because I have been so busy cleaning, and trying to catch-up When I started my journal blog, my plans were to post every day, I haven't been faithful in doing this, but every time I visit you I realize the importance of writing about my day.You are such an inspiration. Please continue!

Sue, I never know where to leave you a note, my site or yours.:) I have so much to tell you. I keep leaving notes on your last post. When you get this tell me where you would like me to leave you notes.
I am reading Anne of Green Gables and I think of you at every turn.
:)