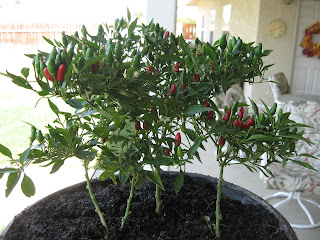 On weekends now, my husband works with his trees.
We walk around and talk about what we would like to do
with the trees that he planted that won't be Bonsai.
I would like a second row of trees so that you could
walk between them and never be in the sun. But as
he is the one who would have to put in the water lines,
it is a huge task. This is his little miniature pepper plant.
He thought he would trim it up to look like a bonsai.
I thought it looked nice. 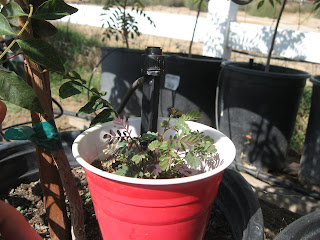 He is still teaching himself about germinating seeds.
We have a Acacia tree in the back. Since they are covered
in a very hard shell and they don't germinate unless by fire.
I was all for getting the blow torch and trying that but he
was afraid they might burn up. So he scored them a bit with
a knife and then he soaked them every day in boiling water,
for about 10 days.
He has some of them in pots but these he just threw in a cup
because he already had so many. Now the cup is full of his little trees. 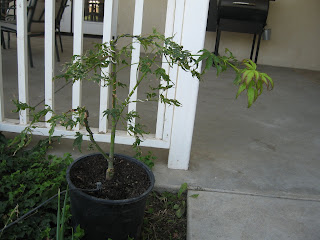 This is one of his Japanese Maples that he trimmed and
then wired so it will grow this way. He uses copper wire
on the branches. 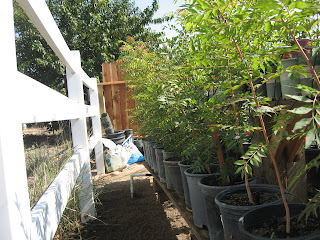 This is some of the first trees he has grown. There are lots
of Chinese Pistache. That is what I would like a whole row of so
that next time there is a wedding and if it is in the fall the bride
could walk down a row of red trees. Just dreaming here, you know
my blog is My Field of Dreams so I do a lot of that out there. So there
would be a row of yellow trees and one of red. 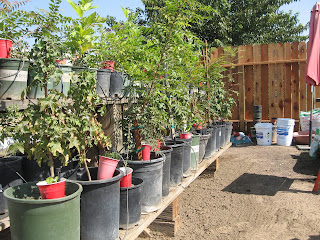 This is the other side of his shelves with his trees.
We went to the park the other day and picked up acorns.
The park that has those old, old cork oaks. Cork oak is used
in Bonsai because the trunk gets so big. I had a plastic bag and
we were walking around and picking up ones that hadn't been mowed
by the lawnmowers.
We stopped at another park that I used to take the kids to when they were small
and we got lots of Valley Oak acorns. Those Oak trees were huge as well.

I used to make potpourri and I used to go to all of these park all over town
and pick up stuff to use. Who knew I would be doing it now for acorns.

Just a bit of what is going on around here. Just lots of dreaming.

That is such a cool hobby. I love hearing about what he's doing and how he's doing it. I'll have to come over one of these days while he's doing stuff so I can watch him.

This bonsai stuff is really cool. I love seeing the different things he's trying. He must be gathering a lot of info! I love the little maple.

Oh, so you shape the branches with wire! I wondered how you accomplished those shapes! I'll have to visit his garden next time we're out there. :-)

Kim, I think that it a really nice hobby to grow trees and shape Bonsai, pretty soon he'll be able to open his own tree nursery. Starting trees from seeds requires lots of patience but must be very rewarding. Good for him. JB

Wow. Trees as a hobby. Pretty cool, if you ask me.

Now that is a hobby. I virtually know nothing about Bonsai's so I am very interested. Sounds like you two have a plan. Have a wonderful evening, your friend from Maine, Julie.

I very much enjoyed your dreams. I could see it all- so clearly.

WOW... I am totally impressed...they are soo neat! I would just love that. I can see your rows of trees with a bride coming through them...I love the idea. I think your dreams are wonderful!

i know your hubby must be enjoying his hobby and enjoying sharing it with you too!

There are so many lovely poems about trees. I bet your husband would like Wendell Berry.

Way back when my husband and I were datin, he was fascinated by bonsai trees. There is so much to learn and so many varieties. I think it's just great! When you have land around you, your field of dreams never quits! I LOVE hearing about all the ideas you guys are doing. If I can't do them myself, I will just enjoy them through you. Our 'land' is city, so our dreams for it are much smaller. I especially love your pumpkins and trees.

I love these kinds of trees .This is such an interesing hobby. Hope you are having a good week.

Cool hobby. Does he sell any of them?

Very cool hobby. I love those little bonsai trees. I had one in my office, but like all plants, I killed it.

Not just dreaming... doing. I love all of the gathering, experimenting, growing and trimming going on there. With that kind of persistence I have no doubt that your dream will become a reality Kim. I can't wait to see the wedding photos!

Kim
So interesting. Your DH has a knack for growing trees. Does he want to start a nursery or are they all for your property?
I love oaks. I need to bring back acorns to plant for trees here in my yard. Those with the huge trunks sure sound nice.