Things I Did Today 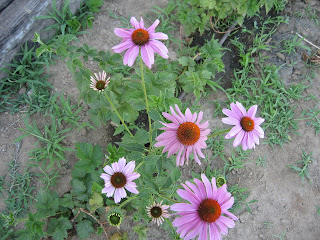 Today was a good day. I got up early, because I knew it was going to be
hot, I went out and picked all of the beets I had growing in the garden.
I think it would have been nice to have had more but really, only my husband
and me eat beets so it is enough. I finished with everything by 10:00 AM
I even had the kitchen cleaned and everything put away. 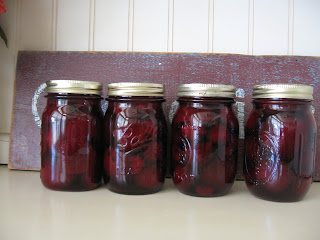 The funny thing was that every time one of my kids came in
they asked, " What did you can?" and" Where did you get beets?"
It made me laugh that they didn't even know that we had some out there
they grew really nice. I can't wait to open a jar. 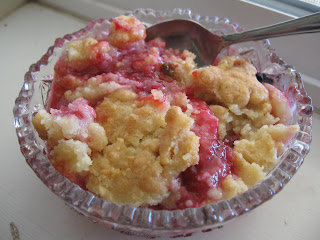 I was talking to my girls the other day and they asked
if I had ever made a plum cobbler. I said no because in my mind
plums and cobblers just don't mix. Then Patrice told me she puts
cherries with hers and makes a crisp. So I decided today I was going
to do that too.
I had some berries left on my berry bushes so I decided I would mix
some boysenberries with the plums. This was the result. I love it's pretty
red color. The kids that were my taste testers said they think it might be
better than my berry cobbler. I am glad because of all of the plums
I have on the trees still yet.

I also decided today was the day to make yogurt in the crock pot. My daughter
had made some and brought it over and it was so good that we sort of fought
over it so I decided I needed to make my own.
I used to make it in my oven, so I like the idea of the crock pot. I sure love
the fresh clean smell of it.

So that is what I did, it was a good day.

I want to know how to make yogurt in the crock pot....PLEASE!!!

I'm so glad you like plums in a cobbler. Did you save me any?

too funny. you named two things that i swore i'd never eat again because of having too much of them in my youth: beets and plums. :)

of course plums baked with berries in a cobble MIGHT be okay... :)

I'll say it sounds like a GOOD day. Soo productive and busy. I LOVE beets, but the hubby not so much so I don't buy many. How I would love to can from my garden...I think. I would love to have you do a post on HOW you do it. The cobbler sounds wonderful. I made plum jelly once. I LOVE LOVE LOVE plums. And yogurt in a crock pot?? How in the world do you do that? Have ANOTHER good day Kim! HUGS

I'd better get moving! Beets canned and cleaned up by 10:00? You rock Kim!

WOW! Well, there you are being so productive and here I am on my computer lost in blog world...I think that I need to turn this off and get to work! :)
Thank you for your kind comment on my post where I talked about my childhood home. You are so sweet and kind.
Enjoy theses wonderful summer days!!!
Joyce

You days are always fun and productive, which always inspire me. I just recently heard about how wonderful beets are for us...maybe I will try to grow some next year.
Cobbler looks wonderful

Hey I made a plum & apple cobbler last night too! I guess it was just a cobbler day.

Somehow cobblers just go with hot weather. Just a goot, simple dessert. Tell us how your yogurt turned out! Even if it flops, it's really good in smoothies.

Your cobbler is calling to me!!! Oh yeah, a woman that cooks. You are after my own heart to know you like making yogurt. I have finally refined mine. Making yogurt is easy and so rewarding. I love hearing about what you do each day. Inspiring.

This is my fantasy escape blog! All the farming and home and hearth needs are met right here on your pages Kim! :) It's a new adventure every day, and all salted with your special little pearls of wisdom.

Kim, you are amazing, You had a very productive day, I'd say. Can beets, clean up, plum cobbler, and yogurt and many other things I' m sure. Hugs. JB