The Tree In My Front Yard 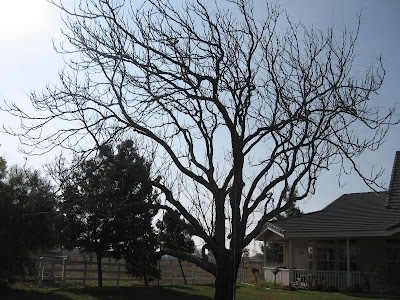 This is the tree in my front yard, I was looking
at it and I saw that it was completely with out leaves.
It is the first tree I have to loose all of it's leaves and the last
to get them in the spring. I just let it be because of it's age.
It is a old Chinese Paradise Tree. I am 52 and it is older than me
because I fell out of it when I was 4 after being told not
to climb it because the branches were too brittle.

This post though isn't about trees other than my husband's
hobby is growing trees. He loves trees and collects acorns and
baby trees and he grows them and plants them here.

I wanted to talk about today is my husband. When
we were sitting at the play, and he was so tired because he works
so long and so hard all of the time and I thought, he always chooses
to sacrifice for me. Even in my hair-brained ideas and he never complains.
Last night, I was thinking as we were sitting there and I was so happy
that I can be so content in his presence. This week is hard for me as
this is the first year since I went back to see my Mom for the last time
and I keep trying to not think about all the things that happened.
I keep trying to remember all of the things and the good things all come
back to my husband.

When things would get hard and I would go out to the motor home, he would
have coffee made and we would talk and have coffee and when I cried he held
me and stroked my hair. He prayed for me so I would have strength.
He would go while I was in the hospital and go grocery shopping. He would wait for
me to do all that I had to do.
He went to the bosses at the place he was working and said, " I am sorry, I know
this is a huge project, but my wife needs me." He was my bulwark between, the
hard things that were going on and he kept me sane.

One of the things that best shows how he is that we were in such a hurry to get
back to the hospital because time was so short. We didn't stop much except for gas
we would leave before the sun came up and drive until it was to late to see.
On the first morning we left, much to my horror, I forgot to pack a toothbrush.
We would go into gas stations and no toothbrushes. That first morning when
I was in a panic about no toothbrush, I walked in the bathroom and there lying
on a towel was his tooth brush and he said, " It's okay, we can share." Just that
simple little thing, I sat on the bed and cried. He had done so much and yet, in
that tiny little thing it said more than dozens and dozens of roses or buckets of diamonds.

Every time I used it I was reminded how much he loved me. Finally we made it
to Lake Texoma. When I came in that night from the hospital room he had found
a toothbrush. I danced and laughed and I was so happy.

I ran across this story and I am taking it from Victoria Magazine, it is taken from
a story from the Writer in Residence, Susan J. Gordon
It I believe is from her book "Wedding Days; How Great Marriages Began."

"In 1644, the English statesman and writer, Sir Richard Fanshawe
married Anne Harrison in Oxford, England. After King Charles was beheaded
in 1649, the Fanshawes sided with the Royalists until Sir Richard was captured by
Oliver Cromwell's troops and imprisoned at Whitehall in 1651. Rain or shine, Anne
stood beneath her husband's prison window every morning at 4 o'clock, which was
the only time they could see each other for months, until she won his release.
It rained a lot that year, and Anne later recalled how the rain went in at the neck
and came out by her heels. Eventually, she wrote her memoirs about their
life together. This is what she said about Richard, more than 350 years ago:
"Glory be to God, we never had but one mind throughout our lives.
Our souls were wrapped up in each others , and our resentments one.
We so studied one the other that we knew each others mind by our looks.
What was real happiness, God gave it me in him." ---Anne Fanshawe---

That is one of my favorite lines." What was real happiness, God gave it me in
him." My other favorite is from the book of Ruth. From Ruth to her mother-in-law,
Naomi, "And Ruth said, Entreat me not to leave thee, and to return from following after thee, for whither thou goest, I will go; and where thou lodgest, I will lodge; thy people shall be my people, and thy God my God; (Ruth 1:16) I used the King James as it is my favorite version.

Still I am so thankful that when I begged that we not get married but just live
together because I was so afraid of ruining his life. He looked at me and said, "
Nope, we are getting married, so lets go to the church." So we did. You know
it has never felt like 30 years, it has just been a moment.
Have a lovely Wednesday.
Posted by Farm Girl at 6:07 PM

What a wonderful, loving, thoughtful man. He is by your side no matter what. God bless him. :)

Kim, you made my heart stop. That little note with the toothbrush is so telling about the man you married and how selfless he is. He sure loves you and you can see how much you love him in these words. I feel very blessed to have a loving marriage too. I would love to see an older pic of you and your husband from the early years--you should share one sometime ;)
Amy, xo

Aww, I'd never heard the toothbrush story. That's so sweet. I've been thinking a lot about this time last year. I hope you're doing all right.

What a beautiful tribute to your husband. If every spouse, newly married or old timers, could realize how true it is that we should consider others more important than ourselves. That kind of servants- heart and a sacrificial attitude is not a popular way to think, but it is true. It is true love to love and be loved like that!
My heart goes out to you,
Joyce

He sounds like a keeper to me! Such a sweet testimony of a loving, giving husband.I'm sure you take good care of him, too! :-)

What a wonderful tribute to your husband and your wonderful marriage. So sorry for you loss.

I love the quotes you wrote..so much to think about...my husband would have done exactly what your husband did...thanks for reminding me to be thankful to the man of my life for the last 35 years!!...married 30!
What a gift from God!! You are also welcome at anytime into my den and let's have a visit!

Wow, Kim! I love how you love your husband...and how he loves you. It's refreshing! Thank you so much for sharing this with us.

What a wonderful post dedicated to your hubby!
It sounds as though both of you are very lucky- Blessed!!!!
What a gift....a treasure!

This was such a beautiful, loving tribute to a good man...How blessed you are indeed. I am new to your blog so I am not sure what your troubles were last year at this time, but I am soo glad you had this man to see you through and be there for you. I too am soo blessed in that department. Recently he has been coming home after his LONG day and serving me my dinner (and often whipping up the dishes too) as he knows by that time my knees are soo done...you have really made me think how I need to express my gratitude more for this wonderful man...Have a great day. HUGS

Wonderful post and Dave has done the same for me when we went somewhere and I couldn't lay my hands on a toothbrush for a day or two. It's not the big things, the flowers or candy, that make a great marriage. I can buy those for myself. It's the things that speak, greatly, of personal sacrifice that whispers a marriage is great.

Hi Kim,
I loved reading this! Isn't it such a wonderful blessing to have a man as good and kind as the one you are married to? I feel the same way about mine. In the 12 years that we've been married, we have unfortunately watched quite a few of our friends and family members marriages crumble for various reasons, and I just thank God for the gift of a good and happy marriage. It's not like we're perfect and never had bad times, sure we have, but nothing that we couldn't work through. I'm so happy that you've been blessed with a happy marriage as well.