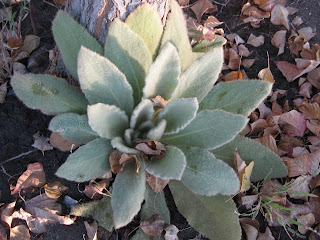 What is Mullein used for?

Mullein boasts an illustrious history as a favored herbal remedy and, consequently, has found use in various disorders. Its traditional uses generally have focused on the management of respiratory disorders where it was used to treat asthma, coughs, tuberculosis, and related respiratory problems. However, in its various forms, the plant has been used to treat hemorrhoids, burns, bruises, and gout. Preparations of the plant have been ingested, applied topically, and smoked. The yellow flowers once were used as a source of yellow hair dye. In Appalachia, the plant has been used to treat colds and the boiled root administered for croup. Leaves were applied topically to soften and protect the skin. An oil derived from the flowers has been used to soothe earaches.

I thought today I would share with you one of my favorite plants. When the kids were small it was always amazing to see how fast it acted after they drank a tea that we made, with honey and lemon and mullein leaves. It would break up the cough and they would sleep so much better and would seem to get over the cold faster.

I was thinking that if the Obama health care plan passes, I am going to become more of a herbalist than I ever wanted just for medical care. :)

You have to express more your opinion to attract more readers, because just a video or plain text without any personal approach is not that valuable. But it is just form my point of view

Gals
You have got to see this. Obama playing on XBox. Funniest video ever. http://bit.ly/bllhx1