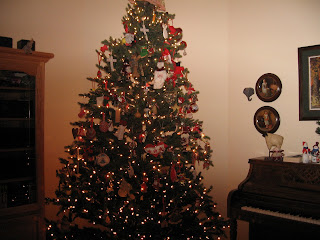 As we enter the last week before Christmas, my attention keeps being drawn to Christmases Past. I am thankful that for the most part I don't remember the hard parts but the parts that I think became the fabric of who and what I am. I am in a story-teller mood this morning I am going to tell as story that still haunts/affects me. Even 30 years later.

When I was a young woman, I worked as a checker in a grocery store. My favorite time to work was at Christmas time because for one thing, everyone was in a good mood, and very happy. My customers would be so funny because they were happy or because they had started early with the Christmas cheer. I loved it though. The store I worked at was at sort of a cross roads, if you went one way, you went down into some of the worst neighborhoods in our town, if you went the other way you went into the movers and shakers of our town at that time, the very old money and the very old names of people who owned businesses and were very rich. I was always seeing the contrast in the types of people.
I preferred the poor people because they were nicer and had time to invite me into their lives. The rich people even though nice too, they were to busy to see the girl behind the counter. I was not yet a Christian, and sort of wandering and taking in the sights of what was real and what was not. I found at that time there was a difference between people who loved God and those who went to church. I was still thinking about things though and not yet sure of what I wanted or who I was going to be.
I digress though and must get back to the story. It was Christmas Eve and we had been so busy all day long, the sun had went down and most of the people had bought all they needed to stay tucked in their homes for Christmas Day.
We were trying to get the store closed so we could go to our homes and to our own families and friends. I was getting my checks and money in order when up to my counter came a man and a little girl. The clothes they wore were raggedy and worn, but the little girl was dancing around her father with her doll in her arms and the look of love and trust that she showed for her Father made me catch my breath in my throat.
Way back in the 70s food was cheaper than it is now, but even then the cheapest T.V. dinner was Banquet T.V. dinners and you could buy one for 39 cents. The Dad was standing there with the cold dinners in his hands and as he sat them down on the counter, the little girl looked up with me with such pride and happiness on her little face and said, " We get to eat these for Christmas dinner tomorrow." The Father looked shyly into my eyes with almost a grimace and as I looked back I saw the world from a different vantage point for the first time in my life. The man I am sure had not always been poor, his voice was cultured and his hands were clean. He bought only two T.V. dinners so it was just them. As he struggled to count out the 78 cents to pay for their dinner, I wanted to take out the dollar in my pocket and just pay for them myself, but I knew I would have shamed that man in front of his daughter so I just stood there.
I have since looked at pictures of gypsy's and when I see the men with the dark hair and the dark eyes and the same quiet air about them, I always think of that little family. I wished them a very Merry Christmas and will always remember those two people and I still pray for them because they caused the cracking in me to begin to find out what Christmas was really about, and to be what I am now and how I made the choices I have.
And of course, never eat T.V. dinners on Christmas Day.
Have a wonderful Sunday.
Posted by Farm Girl at 7:41 AM

I've never heard that story before! I wonder where they are now? Hopefully doing much better.