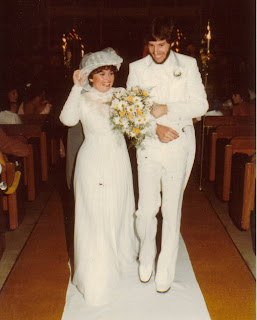 Thirty-one years today, I said yes.
I am so thankful every day for this
man who never gave up on me.

When I met him, I was seventeen. From the moment
he spoke to me and I looked at him there was something
so different that it scared me to death. I knew deep in my
heart I needed to run as fast as I could and get as far away from
him as possible. I knew that he would change my life. 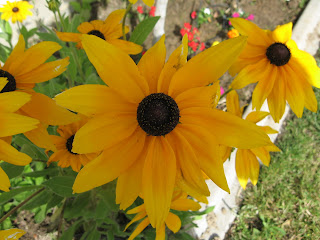 He kept asking me out on dates, I kept saying no.
He never gives up when he sees what he wants. I think I am very weak as I do always give in.
He asked me on a date and I said yes, but I didn't want to go, I was
afraid. I did something I am still ashamed of.

He was going to be at my house about 5:30 to pick me up on a date.
He went before and bought tickets to see Rocky. Then he went to my house.
But I wasn't there. Nope, I had went to my best friends house. I waited
until 6:00 to call my Mom and tell her where I was. She was livid.
She said, " You get home right now, that boy sat
in this living room and waited for you, why didn't you come home?"
I told her that maybe now he would leave me alone. I was grounded
for months. 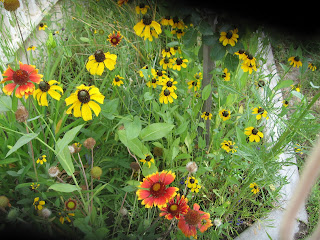 I felt really guilty, I mean really guilty, but relieved I had dodged a bullet.
I was at work, the next morning, when I looked up and he was standing there, he was just
looking at me with the such a hurt expression on his face.
" I just want to ask one thing Kim, didn't you respect me enough
just to pick up the phone and call and tell me you didn't want to go?" I shook my head, and then I said,
"It really is okay if you want to hate me."
He looked at me and then he said, " I could never, never hate you." Then he turned
and walked away. At that moment I thought forever.

I didn't see him again until the day before he left for college. He came to tell me
good bye. I watched him walk away again. I knew then I had made the biggest
mistake of my life, I had lost my best friend. He would fall in love with
someone who would be nice to him and who would love him and be a good wife
to him.

Summer came again, and I didn't even know he was home, I had heard though,
that he had a girl friend.

One day I was going to lunch with my Mom, we were waiting for a parking place and
my mom had backed up a little so a car could get out of the parking place
she wanted. There was a horn honking behind us, I flipped down the visor
to see who was honking, when I saw it was Ron, with his girlfriend in her car. In the middle
of 18th street, I jumped out of my Mom's car while she was yelling for me to stop and wait
for her to park, I ran around to the middle of the street and I saw his eyes light
up and say, " Look, Its Kim," ( like his girlfriend really cared.) My heart was
singing and I knew he would call and he did. We talked about 4 hours that day. 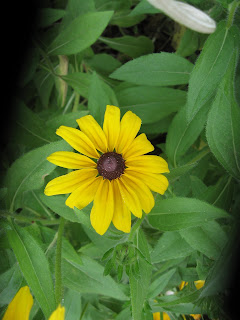 As I thought about him and all that he meant to me
it dawned on me that I wanted to change my life, I wanted to be a wife and not any wife
but his wife. I have wondered all these years why I was so afraid. I think
I was afraid that in saying yes, my life would be so intertwined I would not be me, that
some how I would loose my identity. Now I know without him my life would not have
the richness and the depth that it has now. I would not have found out
that by giving up my life for some one else, I would have had such joy in life.

I am so glad that I did say yes, those 31 years ago and I know that someday
when it is all over I want it to be like this, " Life is not a journey to the grave
with the intention of arriving safely in a pretty well preserved body, but
rather skid in broadside, thoroughly used up, totally worn out and
proclaiming, " Wow what a ride!!!"
Thank you for never ever giving up, now you are stuck with me.
~Kim~
Posted by Farm Girl at 12:24 PM

Congratulations and I emailed you.
What a true blessing!!! Many, many more years...a life time worth.

what a great story for the start of such a great couple! you 2 are now Baskin Robbins - 31derful... :)

your blog is so charming! I love it!

Kim, this is like a fairy tale. I would call it "The Reluctant princess and Prince Charming" I'm so glad that your husband didn't gave up on you. What a nice couple you are walking down the isle, Happy Anniversary to both of you. JB

I brought hubby here to see the dress...I can click on it and make it larger...Kim they are so much alike it is just soooooooooo funny! Well all I can say is we both have wonderful taste in wedding dresses and musically talented husbands.
My husband just keeps saying..."Wow!"

Happy, happy anniversary to Kim, do you hear me singing? I sure am. This is one of the most beautiful love stories I have ever read. I saw your wedding photo, and just had to click, and the smile on both of your faces says it all. Just like God had my dh chosen for me, so He had your Ron for you. May you have many more blessed days together. I just adore love stores.
Hugs,
Sue

Oh ! Kim I forgot to tell you how beautiful you were and still are!!
Sue

Aww I just love hearing stories about you and dad. I remember when you guys were celebrating 25 and I kept thinking "Wow, that's a long time. That's so cool." And here you are over 30 now! Woohoo!

Happy Anniversary Kim!! I hope you enjoyed your day. Our 25th is tomorrow :-)
Blessings,
Marcia

Happy Anniversary, we are certainly in the minority these days. Here's to many more years together for you. Florence

Happy Anniversary! I'm so glad he didn't give up on you. Look at all you've built together with the blessings of God.

HAPPY ANNIVERSARY!! What a beautiful love story!! I LOVED it...How happy and beautiful you both looked on your wedding day. And just look at how God has blessed your life together. Praise God he didn't give up on you! May He bless you with many, many more! HUGS

I barely know what to say. You and Ron are beautiful - not only in the picture but inside as well. It is such an amazing love story. I felt like I was on the sidelines of a sporting event and wanted to cheer out loud when you got out of the car!

You made me cry this morning......but it is a sweet cry! Hope your day is as special as you (and your husband) are! God's richest blessings on you both!

What a great story! Happy Anniversary, and many more! :)

Happy Anniversary Kim! I loved reading your story, it certainly is true love that was meant to be. Thinking of you, Julie

i really enjoyed this post! happy anniversary and i hope you enjoy decades more.

Congratulations sweetie. Thirty one years and the love story goes on!

What a beautiful tribute to your love and your years together.

God bless and may this day be filled with warm love, laughter and cake baby!!!! Heeehhehe!!!

What a beautiful story! You could make it into a movie. Congrats on 31 years! I hope someday to blog about my 31st anniversary. God Bless!