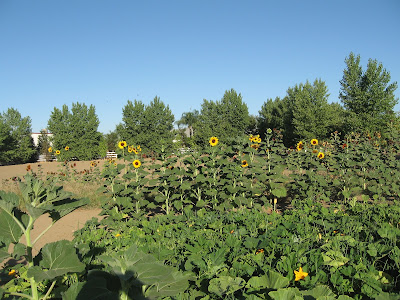 I was out in the garden the other morning. I tried and tried to get a good shot of the pumpkins with the sunflowers that I planted growing around them. The sun just wasn't right or it could have been the photographer. I love how full it is with pumpkin vines. 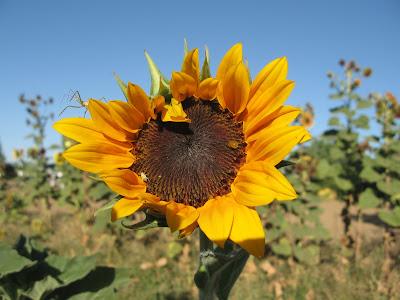 This sunflower was just in the process of opening. I thought it looked so cute with only part of it's petals opened. 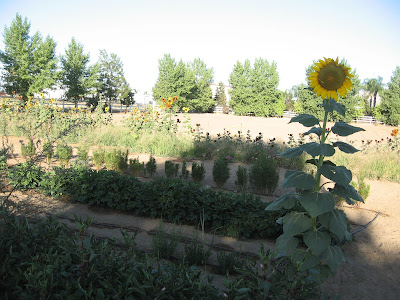 I tried to get a decent shot of this sunflower and now it is too late as this morning when I was out there the weight of the sunflower seeds in the flower has the poor plant bent over like a old woman with too much weight on her back. That was what I thought of when I looked at it. 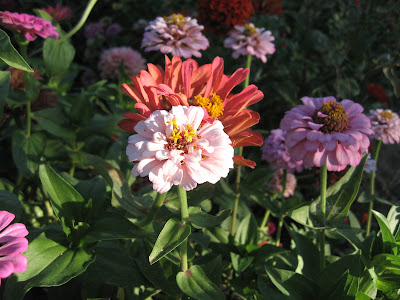 I planted one whole bed of Jack-be-Little pumpkins. I noticed yesterday that I have lots of tiny pumpkins. I am so excited because last year I read how you could take the tiny pumpkin, and cut the top off, and remove the seeds and pulp and then fill it with brown sugar, butter and pumpkin pie spice and bake it for about 40 minutes and you would have your own tiny little baked pumpkin. So I am excited to try it this year. Doesn't that sound like a wonderful fall snack. Kinda like having pumpkin coffee. My other fall favorite.

This morning I was outside and even though it is hot and is going to remain hot, it could have been my imagination but the air felt like school starting and it felt like fall was coming. It is 4 weeks until we start school so it really could be just my imagination.

It is a nice Saturday, I hope you are having a nice day. My daughter's kids are coming down with chicken pox, the baby has it first and you know the two will follow. At least they will have it over with. When mine caught it I had 4 of them come down with it at the same time and it was so much harder on the older ones than the young ones.

I hope you have a lovely, restful Sunday,
~Kim~
Posted by Farm Girl at 2:50 PM

Hi Kim! There is something very romantic about the "feel" of school starting and all the fall beauty just around the corner! I like your pumpkin idea!
I just got home! We had a wonderful time. More later!

Those Jake B Little's are going to be SO cute! Your garden is fabulous and shows the efforts of your hard work. You've done well!

Just let me know when those baked mini pumpkins are ready.:)

love the sunflower!
chicken pox is miserable, I had it at 16!
the mini pie sounds great!

The baked pumpkins sound soooo good. I was reading that you can do that with other kinds of squash, too, like acorn squash.

I feel sorry for the poor kids with the chickenpox and the poor mother. Having it in this heat will be so miserable. I hope that it will soon be all behind them with no complications.

I wonder if you can make pumpkin pies with those little pumpkins.

I hope the kids are all ok soon and no one else catches it. No fun for Momma either. Looks like Kim's Roadside Pumpkin Stand is a possibility :)

Hope those chicken pox get over with quickly...not fun. :(

That little baked pumpkin sounds like it would be divine!

Sure hope those little ones get over the chicken pox quickly ... my grands haven't had it - yet?

We've got dark clouds to the west with a large front over on the Missouri side of the river ... praying that it will not pass us by again.

Poor little babes, hope they are on the mend soon. As I recall oatmeal baths were helpful. In Maine Spring is usually the season for a chickenpox outbreak. Your sunflower patch is amazing, and the baked pumpkin sounds delicious. Have a lovely day, it is raining here in Maine. Hugs, Julie.

I love pumpkin! We are harvesting some acorn squash, and we do something similar....cut in half and bake with butter and brown sugar.

Oh my... sorry the kids are sick... but, you're right... best to get it over with early on. Love the pic of the sunflower just opening! It looks bashful! lol! I'm going to try baking the mini pumpkins... you know... I did not know those were edible? Thought they were just decorative... lol!

Your garden is so beautiful, Kim. Outstanding, really. The pumpkins sound delish!

I remember I had chickenpox when I was 4, my bro was 5. It was summertime and we were miserable, so my mom made a chickenpox cake to cheer us. It was a cake with polkadots that looked like chickenpox all over it. I will always remember how that made us happy.
~Lynn

You will have to tell us if the baked pumpkins are good. Sorry about the chicken pox, but it is good to have them young and get it over with. You are right...the older you are, the worse it is! Hope you are having a blessed Sunday!

Yum- baked pumpkins! And fall! I'm hoping and hoping and praying and praying for a long, chilly fall and cold winter! Ok, well, it's really more like BEGGING. LOL My sunflowers are hanging over too. I like your analogy.

Everything looks so pretty in your gardens!

The baked pumpkins sound delish too!

Hope the little ones get feeling better soon..
Smiles :)
Kerin

Beautiful garden...just beautiful!
So sorry about chicken pox, oh I remember that the first four broke out every two weeks for eight weeks...blessings to you all!!