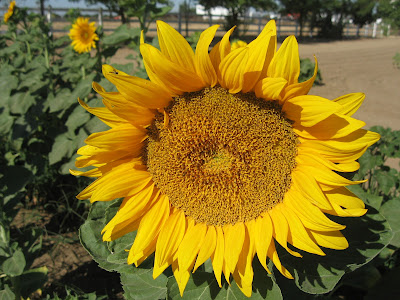 I missed working in my garden on Tuesday. I worked in my flowerbeds instead. Today working in the garden I thought I was going to keel over. As I was down on my hands and knees in the pumpkins and in the tomatoes and it seems so much hotter down among the plants, it came to me why the weeds win every year.
It gets to hot to be a gardener and I wimp out. I was telling myself as I was trying to see but the sweat was rolling in my eyes so bad, this year I won't give up. So with 102-110 degree temps next week we will see who is tougher. 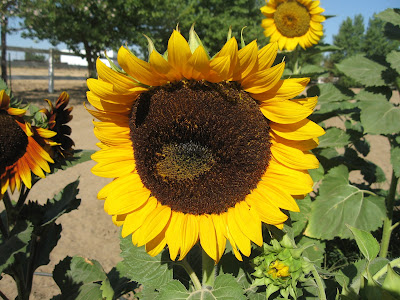 Every year my tomatoes get blossom rot really bad. I thought that this year when we put gypsum to amend the soil we wouldn't have it. But the first I have picked was chicken food because of blossom rot. Last week my husband mixed up Epsom salts and Gypsum with Calcium. He used 1 tablespoon of Epsom salts in five gallons of water and then took tablespoons of the dry gypsum  with calcium and sprinkled it around the base of the tomato plants. Then poured the water on each of the plants. Today I noticed that my plants were greener and I picked tomatoes that didn't have blossom rot and they were really putting on fruit. In fact I would say that it is hard to believe it was just a week. They seemed to have grown a foot as well. 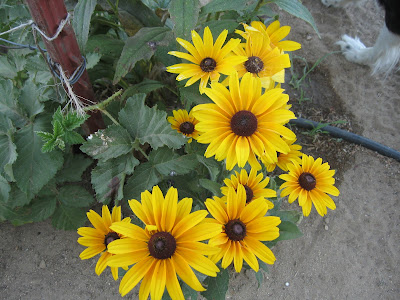 This next week with it being hot, I know my pumpkins will grow like gang busters. They are starting to run now. I noticed the other day, that I had squash beetles. They were huge. I had my pest control lady when she was here spray my pumpkins. They had already sucked the life out of about 6 plants. I don't know what she sprays on them but it is amazing stuff. Today when I was weeding them, I didn't see a single pest. I have tried to be totally organic since I started gardening. I got a horrible squash beetle problem and those bugs attacked even my stone fruit trees. So now I am not organic anymore. It still breaks my heart because I know with the pests I am also killing beneficial bugs, but my infestation was in the words of my pest control lady, " the worst she has ever seen. 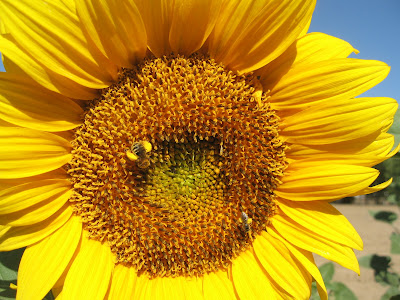 Well, now that I am in the house, I will be hooking my rugs and maybe watching Sherlock Holmes. It seems like a good day for that.
Have a great weekend,
~Kim~
Posted by Farm Girl at 10:48 AM

i love your ever-present gardening assistant (sasha) in that one pic. :) stay cool, gardener!

I see Sasha's leg, too! Good pup!
We have those nice black-eyed susans, too. They are weedy in their freedom but I like their spunk!
I would like to see your chicken rug!
I only like girl movies. I fell asleep watching Sherlock Holmes. Wimpy, I know.

I need to pour calcium on my tomatoes as well. I am getting blossom end rot. And some worm thing is eating them. I don't know if I'll get a very good crop this year. I hope I can get it fixed, because I have plans for canning lots of tomatoes! I did get some organic pest spray, so hopefully that will help.

M so glad you have AC to cool down after the heat weeding! I would be so cranky. We just had another sun shower but this mornings rain broke the humidity a bit. I am hooking away this afternoon.

I am slowly watching the weeds win the war again in my garden this summer...it's 106* on our thermometer(in the sun) today and humid as can be. There's no way I'm going out in that just to pull weeds! I'll regret it though. Next week it's to be cooler and hopefully they won't be head high! :)

I'll have to try that concoction on my tomatoes- they're doing ok but every little bit helps, right? :) Is blossom rot when the tomatoes split at the top? Mine do that. I still don't know what happened to my squash plants but I found some more and planted them with some more zucchini. I was hoping maybe I planted them too early or maybe was watering them too much. I hope it's not some sort of stupid bugs. Dang it. Stay inside- nothing's worth heat stroke!

Our tomatoes are just coming on. It's 104 today! We are also due to have a big storm- yuck! Hope you enjoy your movie and rug making!

Your sunflowers look gorgeous. There's always something to wreck all our garden plans, isn't there. I thought with my carpeted garden, pruning the bottom leaves, never letting leaves touch the soil, and watering just at the base of my tomatoes, I could avoid blight. I'm starting to wonder now, for a couple of them have dried leaves at the bottom. :-(
Good luck with your garden. I realize I should have planted at least one zucchini seed, but I didn't because I get a ton of zucchini every year I plant them. Hope your garden all works out. P.S. I'm an Elinor Dashwood too. :-))))

The terrible heat killed my 2 potted tomato plants. I hope your tomatoes continue to do better.

I know how you feel. It's all I can do just to water my potted plants. So stinkin' hot!

We have only 6 tomato plants in large plastic containers. I hope we don't get blossom rot on them. I think tomorrow I will go the nursery and buy some calcium. I have been crushing all my egg shells finely and putting them around the base of the plant. I don't know how you stand the heat. I'm such a baby when it comes to being hot. I usually take my walk (4 miles) with the dog as early in the morning as I can. Stay cool!

I have such terrible luck with tomatoes. If it isn't blossom end rot, it's those dastardly cut worms. One year it was my daughter's chickens. I will never have a prize tomato- that's for sure!

My garden is winding down, but I do still have some tomatoes for some reason. I'm going to attempt canning some tonight. Those squash borer bugs are horrible -- totally my nemesis in the garden too!

My garden is winding down, but I do still have some tomatoes for some reason. I'm going to attempt canning some tonight. Those squash borer bugs are horrible -- totally my nemesis in the garden too!

Gardening in the heat is difficult. I like the early morning hours for weeding and yard work. Your sunflowers are SO beautiful. Mine are just beginning to make heads. Only a few green tomatoes here so far. It's too early for us yet.

Beautiful flowers! We had several years in a row with tomato problems, so I seeded over my vegetable patch. I miss it, in theory, but I know with the heat this year I wouldn't be out working anyway.

nice post thanks for sharing looking for to visit more...blessings

I have a couple little Sun Gold tomatoes ripening. It's so exciting. I garden very early in the morning. Can't do it mid-day. There's no shade up on the hill here. Of course, my little garden is way smaller than yours! LOL
Stay cool!
Hugs,
Courtney

This heat is really something hard to deal with, Kim I can only take it until 11 a.m. Out tomatoes are just beginning to produce, and they are so delicious. We had the same problem with blossom end rot but now are fine. I know about those pests, they have played havoc on our garden this year, I think one reason is because our winter was so mild, I find myself asking for a colder winter this year. lol I do enjoy gardening and would love to stay outside all day, but for now I will take what time I can get.
Enjoy your day,
Love,
Sue

I'm almost as good at wimping out as the weeds are at growing. We're a matched pair.

Peace, is happy to visit your blog.
I hope you on my space. It will be an honor to follow me.
http://frutodoespirito9.blogspot.com/

With love to you!

THE LORD IS MY SHEPHERD,
That's Relationship!

I shall not want,
This supply is!

MAKE ME WALK IN GREEN PASTURES,
This is rest!

He leadeth me beside the still waters,
This is refreshing!

He restores my soul,
This is healing!

GUIDE ME FOR THE PATHS OF JUSTICE,
That's Guidance!

FOR THE LOVE OF YOUR NAME,
This is on purpose!

THOUGH I WALK THE VALLEY OF THE SHADOW OF DEATH,
That's Testing!

I will fear no evil,
That's Protection!

Thou art with me,
That is fidelity!

YOUR STICK AND YOUR staff they comfort me,
This is discipline!

Prepare a table before ME IN THE PRESENCE OF MY ENEMIES,
This is hope!

And my cup runneth over,
That's Abundance!

SURELY GOODNESS AND MERCY A follow me EVERY DAY OF MY LIFE,
This is a blessing!

AND I WILL DWELL IN THE HOUSE OF THE LORD
That's Security!

FOR LONG DAYS,
This is eternity!


May the Lord bless you and keep you!

I get no tamatoes because of blight. I gave up on them, it is in the soil here everywhere. I have a couple of container plants I hope for, at least a bit. I learned last year, I crush tums antiacid tablets, and sprinkle on my soil. It stopped all the blossom end rot. You can use milk for that too. Splits in the skin are often caused by extremes of water, or lack of it then heavy rains on them.
I too love your sunflowers, the ground hog is already trying to get mine & it has not a head yet upon it. He is biding his time.

Glad you got those pests under control. Hope you enjoyed your time "hooking"!

Your sunflowers are SO SO beautiful, Kim! And I'm with you, I notice my enthusiasm for weeding takes a big nosedive as the summer wears on. It seems like if the major weeding didn't get done by June, it just may not get done. There's always next year, right?

Glad you got the bugs under control. I hope you can keep those weeds under control, too ... but I can't help but worry about you out there in that horrible heat. Pace yourself, drink lots and lots of water, and stay inside and hook when it's just too hot to be outside.

Oh our sunflowers never got as pretty as you. I am learning, I used Epsom salt on my tomatoes this year.

Thanks for sharing your garden...I am late getting here and with all your comments it might be awhile before you see I have visited...you Go Girl!!!