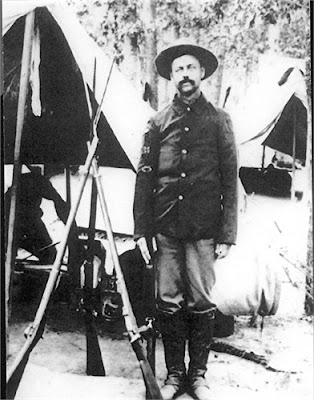 Today during school, we started learning about the Spanish American War. I knew that I had seen pictures of my great, great grandpa once, I tracked them down so my son could see them. I think history becomes alive if you can put faces to it. I thought you might like to see it too. Aren't the guns huge? 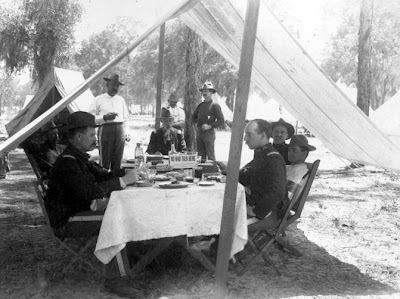 Look at the tent and it even has a table cloth. I think this must have been the officers tent. 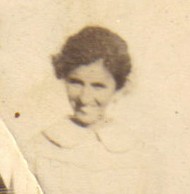 This is my great grand mother. She had just married my great grandfather. Isn't she cute? I thought she was I love the look on her face. 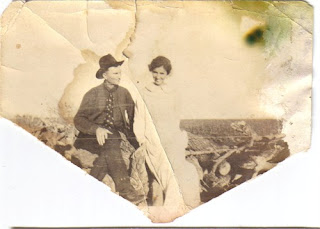 This is my great grandpa and great grandma on their wedding day. He looks like a rough and tumble kind of cowboy type doesn't he? 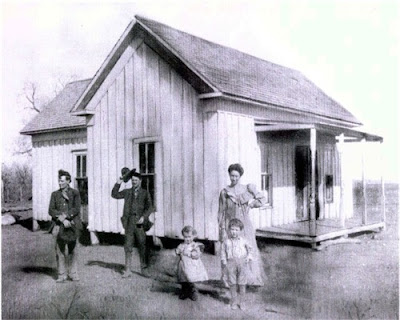 This is their house in Oklahoma two kids later. She did go on to have 12 I met her once when I was a little girl. She was tall and thin and very quiet. Her eyes would dance even if she didn't talk much.

My grandpa in the second one with dark hair. These are some of his brothers. My grandpa came to stay with us when I was two or so, then I didn't see him again for a long time. There was this show that came on Saturday mornings and Ronald Reagan was the host. I thought that Ronald Reagan was my grandpa. I would watch it every week. Just to get a glimpse of him. Years later when I saw him, I could tell they were different but I always had such a fondness for Ronald Reagan because of it. :) 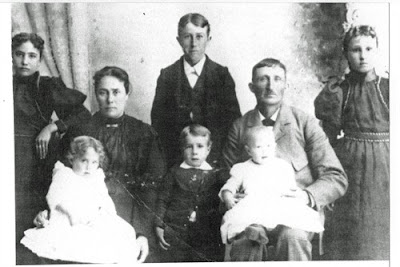 I love this picture. The girl with the really bored look on her face in the upper left is my Grandma in the above pictures. Her maiden name was Sexton. I just loved this. 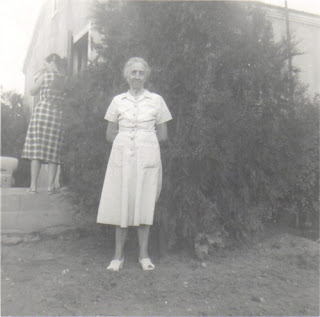 Then years later, there she is after raising 12 children. She died in 1977 I wish I had known her better.
Thanks for walking down this road with me today.

What a WONDERFUL post!!!.
History plays out and we need to hold on to it because it is why we are us!!!
A great way to teach your history lesson. The best way:)

I love this post! The photos are incredible! Thank you so much for sharing these beautiful moments.

OH! Kim, what treasures you have here, and I enjoyed reading about your family. A few weeks ago we drove by my grandmothers old home place in another county, I took pics. just haven't had time to make a post. Your great grandmother was very pretty.
Thanks for your sweet words on my blog, you are a treasure. If we lived nearby I would so enjoy making jam together.
Enjoy your evening, I am in for the day, and thought I would do some visiting.
Love,
Sue

what a great collection. love that OK house.

Great post. I love old pictures like this. I'm always wondering what was going on in their lives. Interesting enough, I was going through pictures just this morning and found lots and lots of great very old pictures. I'm not sure what to do with them. I want to do something special though.

How wonderful for you to have those amazing family photos in your possession. Your great-grandmother is just lovely, twelve kids? she was an amazing women. I enjoyed reading this post, thank you. Hugs, Julie.

McGuffy Ann emailed your post to me because she knew I would love it ... and, of course she was right, I do love it. I have pictures back to my Great Grandparents. Unfortunately I don't know who most of the pictures are because I didn't get them until after my parents passed away. But some are marked and I treasure those. I'll bet your son was thrilled that his Great Grandpa was a Cowboy. Your Grandma deserves you loving respect ... she was a courageous women. Thank you for sharing.

Andrea @ From The Sol
http://www.fromthesol.blogspot.com

I love those old photos. What better to get the kids interested in learning about the civil war when their great great grandfather took part in it.

Those folks of long ago lived a hard life and survival was their main goal I think. They worked so hard and everyone had to do his or her share. Life was very harsh.

What I've noticed of a lot of old pictures, even the old school pictures is that nobody smile. They all look so uptight and serious possibly because they were not supposed to move to mess up the picture.
I bet that when they had an occasion to celebrate at a wedding they would have a great time I think with a lot of smiles.

When I have my passport photo taken, I'm reminded of those unsmiling faces of long ago.

Hugs with a big smile, JB

Those old photos are great. It is fun to look back at all those from our past. I did the same last week and really enjoyed it. It makes me think, now with the digital age, prints are rare. We will lose alot of our history that way I fear.

Thanks for sharing your pictures. I like to see old photos.

What great photos1 I bet your history lesson DID come alive!

These are just awesome...what treasures! I also love your observation at a young age...I couldn't tell you if my great or grandmother's eyes danced or not! I keep thinking you should write books like Patricia Polacco....and make sure you save me a copy of your first book!

Oh your comment the other day on the "reality check" post...I just laughed, I could so see us both setting talking and talking away about the subject, probably both finishing each other's sentences...LOL

Hey friend! I have been out of town for a few days, so I am just getting caught up! Love your old pictures and your beautiful roses and sewing projects. I think I know you well enough by now to say....I know you don't just follow your husband around and take pictures. You are much too industrious for that ! :-)

What precious memories you have here! A wonderful collection of history and such treasures!

What a lot of old photos ... my families evidently didn't take many photos ... or didn't save them. You're blessed to have so many photos of your family from so long ago.

Missed you the last couple of days .... hope you're doing well.

I just loved this! What treasures you have, and so many of them. I only have a few, but I do love them. Nothing like old photo's. Hope you have a good day! HUGS