The Last Friday Before December 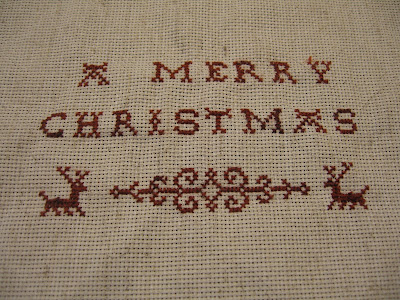 This is the only thing I got made this week. I just never know where the week goes. It was a simple project and it took me a solid two weeks. I get to go have my eyes checked today, finally. I have had to limit all of my sewing and even my computer time because of the headaches. I hope that once they tell me what my problems are I can go back to sewing and driving and even being on the computer. 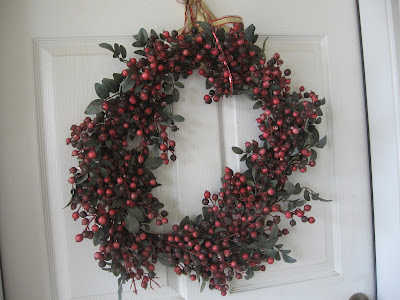 This is the picture I have at the top of my page. I just had to tell you that when I got my Christmas wreaths out this one had got a bit smashed from being on the bottom. I put it on my outside door on the back porch and one day I was looking at it from inside the house and I noticed that perfect heart shape. I thought it was so pretty and I finally took a picture of it the red wreath against the white door. Do you see the heart shape? I was going to straighten it out and make it round again but then I thought I liked this better. 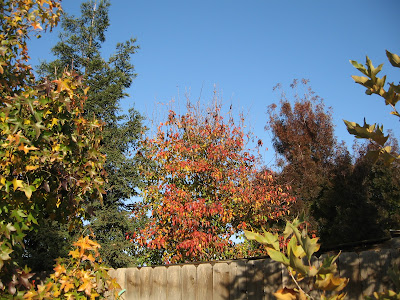 My number is up for jury duty next week. You know I might like serving my jury duty time but every time I get called I get picked for Juries that is either a violent murder or a child molestation case or gang killing. The first time I was called I was 18 years old and the case was one that involved a attempted murder. They people being accused were sitting there and they smiled at me the whole time. It was creepy. Then come to find out the murderer guy had once worked for my Dad. Then the gal who was almost murdered her Mom was friends with my Grandma. They kicked me off so fast it made my head swim.

The town I live in is by the 2010 Census said, the city’s population was 347,483, making it the 9th largest city in California and the 52ond largest city in the United States.

The funny thing is even though it seems so big everyone knows everyone else and everyone else is related to someone you know. Case in point, Nik's Mom whom I just met on Thanksgiving went to school with my husband. In High School my husband was in a band, with her boyfriend. She knows all of my husband's friends. So if you sit long enough you will know someone. Like on jury duty. When I sit there and wait, I usually end up knowing the people I am on jury duty with hopefully not but know the people being tried.
The judge I always seem to be in the same courtroom with was friends with my Dad. I would just once like to be not in Superior Court but on some simple case.

So that is my week next week. I enjoy watching people anyway so I just sit and watch and write sketches of people I see. I pretend I am Charles Dickens and I am collecting for my novel someday.

We are supposed to have rain the whole weekend so I am really excited about it. I hope you have a very nice weekend,
Thanks so much for stopping by today.
~Kim~
Posted by Farm Girl at 8:27 AM

and i love that wreath! round or heart-shaped, either way!

The wreath is beautiful and the heart is special!
Hope you survive jury duty but better still hope the headaches go and you can stitch to your heart's content.
Blessings
Christine

I love the wreath. Funny, I didn't even notice the heart shape until you mentioned it. I'm glad you didn't straighten it.
Ewww to jury duty. I got called once and luckily I didn't get picked. I sat there all morning trying to look shifty and suspicious so they wouldn't pick me :)

It's coming! I can see it out over the mountains to the west. Beautiful grey clouds. Well hopefully you don't get picked for Friday!

Beautiful stitches! I'm hoping you get some relief from your headaches so you can stitch some more! :-) Headaches for me are usually sinus, dehydrated or tension in the neck and shoulders from too much computer... sometimes the OTT light i use for stitching gives me headaches too. Hopefully it is something that can be pinpointed so it can be fixed! Jury duty in your area sounds too intense. I was picked for jury for a car accident case... even though I was involved in quite a few accidents.. they made me stay! geeesh! I think they should keep murder trial jurors behind one way glass for protection. Yes, I see the heart in your wreath! :-)

I hope your eye appointment sheds some light on your headaches and you get some relief! I love the wreath, by the way...so simple yet elegant! And hopefully jury duty is over with quickly!

I hope that you get some new glasses and the headaches will be gone.
The heart wreath is lovely. I have a similar one but round and skinnier.

I got chosen once for jury duty and on the morning of the trial, the judge's mother died and he postponed the trial and and all the jurors went home. I wasn't called again and I can't even remember what it was for.

Hi Kim, Having issues with our eyes is not fun! Take care of them. I can't remember whether you are in northern or southern Ca. We lived in northern Ca., first Palo Alto, then Cupertino, then Santa Rosa. I hear that lots of rain is due this weekend with potential flooding. Stay dry and have a great weekend.
Hugs, Noreen

I hope you have some answers about your headaches, Kim.

I like the wreath the way it is. Very appropriate at anytime!

I've only been called to serve on the jury one time. Now I'm an age where I will probably not be called again.:)

I send wishes for a good week-end to you!

Kim,
I will be praying for your eyes. Headaches are very tiring and disheartening. I am so sorry, friend!

I love the heart wreath- I see it and love it the way it is. Good call!!!!

I did jury duty on a drug charge that was in a court 2 hours away from my house. I was only like 20. All of the jurors were about 20 years older than me. I was actually an alternate juror, so my thoughts didn't really count. I felt like I was in 12 Angry Men. The jurors rushed to a decision because they wanted to be done and go home. Not making it up. They said it. I was so sad being a young adult and still am today about the lackadaisical attitude. Plus, when the guilty verdict was read, I wasn't with the jury. I was in the audience. Also, the judge kept falling asleep. Fun times!!!!

Man, your story is a bit scary. However, I like that everyone knows everyone else. That happens to my father-in-law all of the time. I love that you do character sketches! What an awesome idea!

Jury duty. I hope you don't get picked. I know somebody has to, though.
The wreath is super pretty and so is your stitchery!

I love that wreath ... that subtle heart shape is precious!

I sure hope that you can get to the root of your headaches! It can be quite debilitating to continuously fight headaches ... and quite depressing to not be able to do the things you love to do.

Hope you get that rain. Good luck with jury duty, too.

I saw a wreath today made with artificial cranberries and it reminded me of your attempt at making the fresh cranberry one. I laughed all over again remembering your story! Hope your jury duty experience is better than previous ones. I look forward to hearing about it...I'm sure you will have a story to tell! :-)

I love your cross stitch piece, it is beautiful! Hope they get your headaches resolved. Farm Girl Hugs! Florence

Love the wreath and I did see the heart in it right away but this is a girl who sees hearts in rocks wait did you know they have a book of nothing but different types of rocks shaped like hearts?? Well there you go now you do LOL

oh Northern Cali girl here and I am listening to the storm just howling away stay dry!!

Kim ~
Love the wreath and the simplicity of the cross stitch.
I was curious about where in California you lived so I Googled it. What a small world. A friend's daughter lives there and so does a former co-worker's step-son.
I haven't read today's post but I do hope the headaches go away.
Hugs :)
Lauren