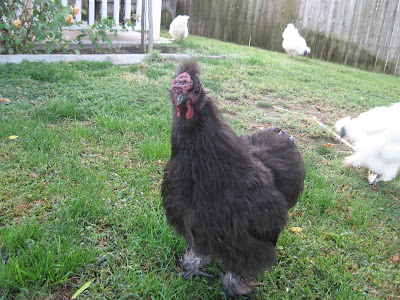 It has been awhile since I did a chicken post. I lost so many hens this summer due to the heat. Then I had that one fall into the pool and drown. So I guess I have just been sad about my chickens. If not for the wedding coming up I would be planning on getting a whole new flock of laying hens. I have to put it off because I don't think I could do both. Chicks and Wedding.

My whole experiment with roosters has been quite interesting. I have two now, a black one and a white one. The White one was the dominate rooster but there must have been a rooster fight so now the black one is the boss. They are both kind roosters and only a little pompous. The white one only threatens to take on Sasha and hasn't pecked her yet, but I know this spring, there will be some problems. I have until spring I think to decide which one I will keep. 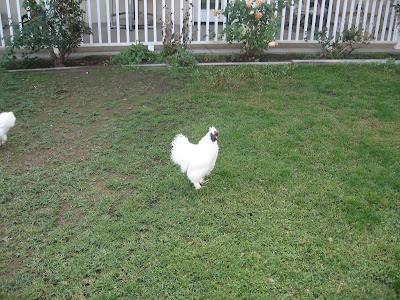 I had all of the silkies in one pen and the big hens in the other one. My oldest silkie was in there with the roosters. Well, having two young roosters and one old hen, ( the other silkie hens must have been off limits because they left them alone.) I don't know if roosters would kill a hen but I was afraid that they would kill her. Because they are smaller than my big hens I put them in the big coop. The big hens just do this look and raise their neck feathers when the guys get a bit frisky and they run for their lives. 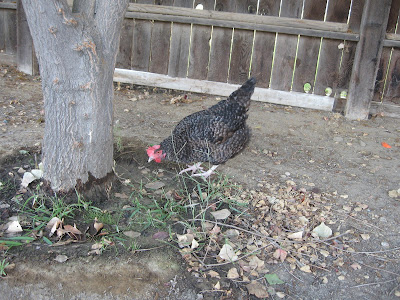 Before my oldest daughter got married, she was the chicken wrangler. I didn't have much to do with them. Then she got married and I started taking care of her chickens. She had these 3 old hens that I called the Witches of Eastwick. They were the meanest old biddies you ever saw. When I got my first batch of chickens they taught them such bad habits. Like pecking the fire out of someone if they didn't move fast enough. Only one is left out of that original bunch. But they always slept on the best perch and wouldn't allow the other hens to get anywhere near them to sleep at night so they have hogged up the perches for years. 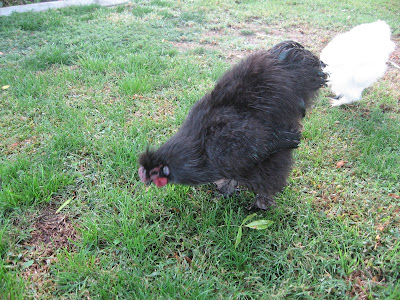 The other night I wanted to see what the sleeping arrangements were since the roosters had been moved. I took my flashlight and went down to the coop and I just laughed at what I saw. Scrunched over against the wall was the old hen and on the top perch was the black and the white roosters. They have no patience for pecking order. They just muscle themselves in and make themselves at home. I could see them holding the remote for the TV if there was one. I notice that they keep all of the pecking and fighting down to a minimum in the big coop. 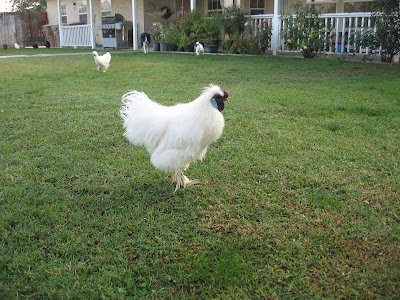 I can tell my life is too busy when I haven't spent enough time just hanging out with the chickens. I need to try and make some time to just sit and watch them. They always help my mind to rest. I do enjoy holding the roosters though. They make such thankful sounds. Little peeps like when they were chicks.

I hope you have a nice Wednesday. I hope your week is nice.

Thanks for stopping by today,
~Kim~
Posted by Farm Girl at 7:44 AM

i always enjoy your chicken posts. you have such a love for them that comes through.

Just reading about your chickens calms my spirit ... I can only imagine how relaxing it is to just spend time with your chickens.

That's funny - calling the hens old biddies and the Witches of Eastwick!!!
Last week my dad had to 'lose' a rooster as they were really badly behaved!
Hope you get them sorted!
Christine

Yes, they do decide who is the leader.

I love hearing those chicken sounds too...it's rather peaceful, isn't it? Until they get to establishing their pecking order! I did my pre-winter clean out of my chicken pen this morning, and they're having oh so much fun scratching through the new straw!

wonderful post!
amazing personalities they all seem to have!

I love your white rooster. He is just gorgeous. It's funny how they are keeping the girls in line.

I too love the look of the white rooster.
There's pecking order with the older heifers and cow too. Some are bullies.

I like the line about the remote control. Too funny. Male dominance.

Have a good rest of the day.
Hugs,
JB

i can't tell you what fun your chickens are, and the way you describe them!! :)

I hate when life gets so out of balance I don't spend enough time with my horses, sheep and alpacas. The dogs and cats always get ME time but the rest of them...not so much, I'm sorry to say. I'm also sorry about your chickens not making it; it's always sad when an animal dies too early to suit.

I'm so glad you did a chicken post! The little roosters are so sweet--and then springtime comes, and somebody has to go in the stew pot. :-)

I really enjoyed the post. Pretty funny about the old biddies. I needed a laugh.

That biddy speckled hen is so storybook pretty!
I like the idea of the cuddle-clucking they do.

They are too funny, love to see a video too of them. How old do they live to?

Enjoyed catching up! Sounds like a sweet Thanksgiving and I love your Christmas lights! Always like hearing about your chickens and your delightful relationship with them. Things are a little crazy here with the construction, but I finally got to see how nice our new room is going to be..Woohoo!!

Roosters are interesting creatures aren't they? I used to keep them, but now I only want the old biddies and none of the bossy cocks. The hens are much calmer without the roosters always at them. I love my chickens too.

Your chicken posts always brighten my day. I imagine them as little people and I even think they talk (when you are not around of course) So cute!!

I think you should title your chicken posts something like- the Fabulous Chicken Post or Wild about Chickens. LOL How did I miss that you lost so many? That's just sad.

I always enjoy your chicken posts. I will not be able to have a single rooster when I get my girls. My neighbors are too close.