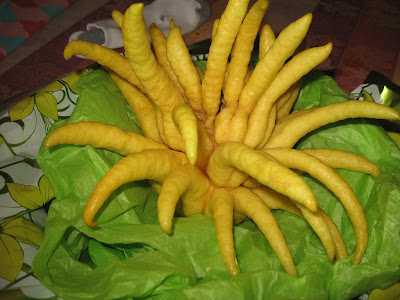 Thanksgiving Day my MIL brought over a Citron or what the tree is called Buddha's Hand. We have a small tree but it hasn't yet produced the fruit. One of the things that I think is interesting about it is that it contains no pulp or juice. It is used only for the zest. You can candy it or use it to flavor sugar or salt. Anywhere you would use lemon zest you can use this. The only creepy part is when I have cut the little fronds off I can't get away that I am cutting off fingers. It really is very oily smelling of lemon. 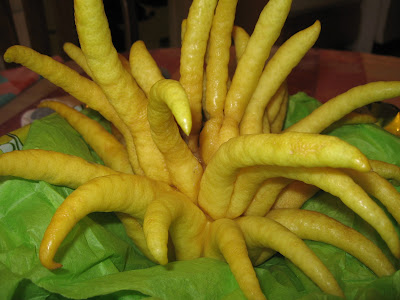 It says that you can put the " fingers," into vodka to use as I would think for lemon flavoring.
My MIL brought a paper that says, " Buddha's hand's ancestor, the ordinary citron, is one of the three original species of citrus. This prodigy is a genetic mutation that arose many centuries ago in the citron's homeland, within the lower Himalayan mountains. It was introduced to California in the late 19th century grown in gardens and groves". They also use them in Bonsai.

We picked a  Eggplant this weekend. It really has grown so huge. I think it might be too  tough to use but it is really a nice eggplant. The plant really likes the cooler weather, but if it frosts soon it will kill it. It has about 5 really nice eggplants on the bush. 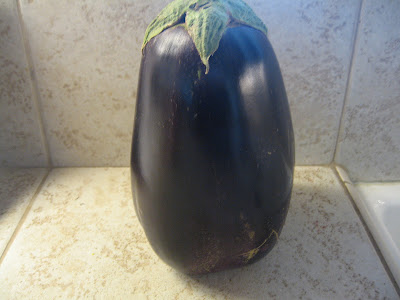 Just some odds and ends I was going to blog about. I feel like dancing around because the weatherman says we will be having lots of storms. It makes me so happy.

I hope you are having a nice Monday.

I saw the title and thought, aw, a religious revelation and then I found a fruit. An amazing fruit that is my something new I have learned today.

Did you know you can slice the eggplant and salt in a colander to remove the bitterness? Just rinse and prepare as usual.

I've learned something new today too as I've never come across this plant before!
I do think it is creepy looking as is talk of cutting off fingers!
That's a HUGE eggplant!
Christine

The citron is amazing looking. I never saw one before and wow is it different. If I were you I would cut the eggplant up in chunks and roast it with onion, garlic and balsamic vinegar. After it has roasted blend everything in the food processor with a little extra virgin olive oil, salt, pepper and fresh parsley. Serve over pasta or as a dip with pita chips.

never knew what citron looked like - knew it was very lemony, though. pretty cool!

Wow Kim, this is really interesting. I had never seen one of these and didn't even knew that they existed. What a cool fruit. Thanks for this.
I looked it up on the web and saw all kind , even some that really looked like a hand.

I can't wait till your tree produces some fruits. It will be fun to see.
Have a great week. Hugs.
JB

I have never seen one of these plants either. I can imagine...those things really do look like fingers! Do they grow back again once they're cut off?

I've heard the name, but never have seen it before. Slice that eggplant, drizzle some olive oil over it, cover with mozzarella, fresh parmesian cheese & crumbled bacon. Broil. Yumm!

The citron plant is amazing. also amazing is the fact that I have never tasted eggplant.

The citron is very cool looking. It's so tempting to leave veggies on the plant too long, as they grow so large in size!

So that's what citron is! Here I was kind of afraid to touch the plant for fear it was poisonous or something. I wonder if you could use it in marmalade, since you don't have to worry about getting rid of the pith?

I've never seen a Citron either or knew what is is. Very interesting post. I do love the taste of eggplant.

Storms are exciting, right? Nice eggplant, Kim! It's so perfect! I love your house in the header! So Christmasy!

Kim
I'm a storm lover too.
That Citron is creepy, for sure.
I get the finger cutting thing alright.
So nice you can grow your own eggplants.
Maybe I'll have a greenhouse someday, then
I could grow some too.

My grandma made cookies that called for citron. I never knew what it looked like until now. (I don't think I could ever cut one - totally get your aversion.) I always learn something new here. ;-)

I so love your eggplant, Kim. We had such a poor vegetable crop this year -- I cooked the last of the eggplant tonight, they were just itty bitty little things, about the size of my finger, and they were so terribly bitter I threw them all out ;( I hope you have better luck with yours than we had with ours.

And your header is absolutely gorgeous. Such an inviting home :)