I could hear Charlotte's words ringing in my ears. As I took that first step on the side walk that was now pushed up in places from the roots of trees growing every which way looking for water. I put my foot on the bottom step now rickety with age and disuse. The porch leaning ever so slightly. The wind began to blow softly through the branches, causing a old porch swing to sway gently in the wind, as though a ghost from somewhere beyond what I could see was watching me and  began to rock ever so slowly. In my mind was the fear of what I might see but more of what I might not see.

I reached up for the handle of the screen door to pull it open. The door screeched, complaining and announcing that someone was there. I looked down at my hand and it was shaking. The old wooden door
was about 10 feet tall and the doorknob was of the old metal ones with the metal piece around it for a skeleton key. I really didn't expect it to be open but it was. As I turned the handle, the door was stuck so I had to use my hip to bump it open. The damp from the last storm had swelled it shut. As I opened it the smell of dusty, old, musty rooms hit me. I could smell the aroma of mice and then the faint breath of lavender. 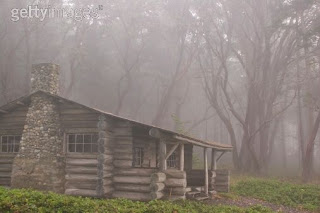 I don't know what drew my eyes down but the wood floor, at one time well taken care of was now scratched and scared, with deep lines in it from heavy furniture being dragged across its surface. It was a small living room, and there to my left was an old black walnut table with claw feet. To my right was an old wooden chair. There was wall of glass fronted books shelves. I walked over to the book shelves and opened one of the doors and inside was an old diary. I picked it up and blew off some of the dust. A old letter fell out and drifted down to the floor. I bent down to pick it up when I heard what sounded like footsteps above my head. I put the diary and the letter down, and looked up. Then I heard it again, the sound of something moving across the floor.

I don't know what possessed me, but I knew I had to go up those stairs.  I put my hand on the bannister, and stepped on the bottom step I heard that sound again.
I had goose bumps all over my arms and I think my hair must have been standing on end. The wind outside had become stronger and the limbs were tossing and causing the shadows on the walls to dance as if I had walked into a party of people I couldn't see.

My feet felt like lead as I climbed upward toward the sound. Again I heard the steps that moved causing the floor to creak and groan. I climbed to the top and I saw a small hallway. There was only one small window on the landing so it was dark and the shapes in the hall began to play tricks on my eyes. I heard the sound again. It was coming from the room that faced the road and the one I had seen the face and the hand inviting me to come in so many times in the past.
I turned the door and walked in that room, I could hear faint breathing, and then a scratching sound. As I pushed the door open to see a bit better. Something was walking towards me I could feel it more than I could see it as my eyes were adjusting to the dim light.

Then I felt the warm body of a kitty wind around my legs, purring like a motor boat. In the corner, I could see a pile of rags and a jumble  of small kitten bodies mewing and tumbling all around. There were two black ones, and orange one and small stripy one. I blew a sigh of relief and all I could think of was getting out of that house and getting home.

As I ran down the stairs, I noticed that there was a broken window where the cat had came in because her fur was caught on the broken glass. I ran out that door and I ran all the way home.

This is a work of fiction. Though somethings are true. There was Mrs. Krebs and she did live in that house. There were weird accidents that happened to her family. Today, the house is filled with a family who have 12 kids. There is a white picket fence. I did walk that way home from school, but Charlotte had eyes like a hawk and if she saw me even stopping at that gate on my way home from school she would have marched over there grabbed me by the collar and took me home and told my parents. I would never have the nerve to ever trespass on someone's property. I am a coward at heart.
Thank you for reading my first attempt at fiction.

I loved this! You write very well Kim...I was with you in that room! Hope you have a wonderful day! HUGS

haha on the Exorcist story....it was just soo scary. My hubby read the book when he was in college. He was alone in his dorm room one night really late reading it and creeped himself out sooo badly he had to get up and turn on lights, haha. Big football player and wrestler was scared!

Kim, what a great story; very well done! You had me from the first word and thoroughly enjoyed your writing.

That was a very wonderful effort, and yes, you should write more. We loved it!

I can tell you, I watched a metal detecting video not long ago, the fellows did much the same,walking through an old abandoned house. They went up the stairs and when they opened up the door, they smelt a terrible odor.
A huge big dark shadow moved between them and the light from the broken window. It was a huge big buzzard that had been living there eating its meals (hence the odor). The camera showed them jump when it moved, then it turned and landed on the window sill. It looked over its shoulder at them and then swooped out the window.

Thanks for the tale.

I have been waiting for this all morning! Such a good story - you should write a whole book! :)

Ah, Kim! You had me on pins and needles waiting for this installment! Nicely done!

Love the ending and your images as spooky! Happy Halloween!

Ha! When I read the part about having to go up the stairs I was thinking, "NO you don't! Just go outside!" LOL You did a fabulous job! I'll have to go read part 1 now! Sure have missed you!

Oh Kim, you are quite the writer. Thanks for taking the time to amuse us with your fiction story on this Halloween night.
I love your spooky story. It reminded me of stories we told ourselves when we were young.

I like the ending! It's the anticipation that's the best part. Hope you're feeling better! I commented once, but Blogger errored.

Kim, you had me captivated from the very first sentence. As I read along I thought to myself this girl is either very, very, brave or doesn't have the brain she was born with! A wonderful story, you have a gift with words. I want more!!!Keep up the good work. I hope you are enjoying Halloween with your beautiful children and grandchildren. This granny had a little cow come trick or treating. Happy Halloween, hugs Julie.

I loved the end...gave me an idea. Maybe we could give out some of our extra kittens for trick-or-treat! :)

Oh my, what a fantastic ending ... I loved this story! I've said it before, but I'll say it again ... you have such a way with words!

What a wonderful short story. Your grandchildren must love your lap and your stories. Keep them coming!