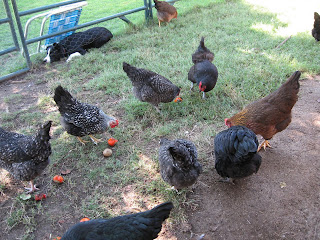 Can you believe it is the first day of August?
I remember Erma Bombeck lamenting that August
was the longest month, how come it was the only
one that didn't have a holiday to break up the monotony?
February was the shortest month and look how many
holidays it has, and it isn't even hot. That is what I think
about in August.
Here is a new pic of my new hens. I threw them some
tomatoes so they would stay still long enough to get their
picture taken. They don't like the Paparazzi. 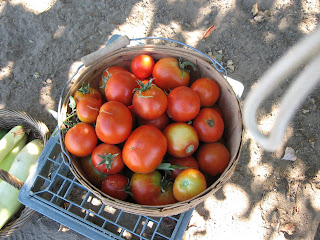 I picked another bushel basket of tomatoes this morning.
I was wondering if it would be tacky to put a salt shaker
out in the garden on the fence so I could eat them as
I pick them. This is what the tomatoes got turned 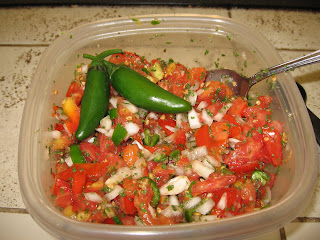 into later. Yummy stuff. I can't wait to have it
in the morning on my omelet.
We also picked a bushel basket of cantaloupe. 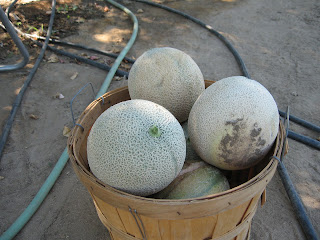 Does Cantaloupe have a plural? Cantaloupes?
We ate a couple for dinner. It is heavenly. My son
said later, when I was forcing him to sample my salsa
with some tortilla chips, " Oh, I am so full, I feel just
like at Thanksgiving." We did, having food from the garden,
is just the best.
I hope that your Sunday is a restful one.

Garden food is so good! I guess not having much food has made me get over being picky. I keep combing the internet, looking for new ideas for cooking veggies. I think I'll use the last zucchini for zucchini bread, because the kids want snacks. Veggie pizza was good last night, but I used too many veggies. It was kind of like Roasted Tomatoes On Toast.

Hey Kim...those tomatoes and cantaloupes look great! And, the salsa! Yummy! I wish I lived closer. And, course, the hens look so pretty!

What a nice blog you have. We've had an abundance of tomatoes around here, and we're just on a quarter acre. No hens though :-) I've enjoyed visiting your blog.
Blessings,
Marcia

they're such *princesses!* lol.

the tomatoes & cantaloupes look FAB to the bone!