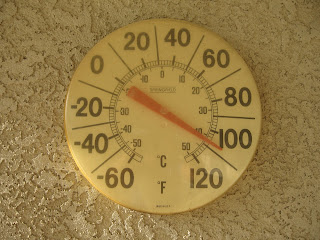 This is Thankful Thursday.
I can tell you that I am so thankful for air conditioning.
Today, I am not even thinking about how much the units
have run or how big the electric bill is going to be.
I have been outside in it over and over to take care of
the chickens and the rabbit. I keep changing their water and
spaying down their little yard, I finally felt bad for them and
just let them out in the big yard, I didn't even care if they
tore up my flowerbeds.
I think 110 is just too hot. Every time I walk in the back
door and the air is running I tell God thank you that I live now
rather than when there was not air conditioning, I remember
when my grandparents didn't even have a swamp cooler. I don't
remember them complaining either like I am doing right now.

My other thing that I am thankful for is my husband is going to be home
tonight. I don't sleep well when he is not at home. In fact, I kinda pace around.
There has been a gosh I don't know what you call him but a guy in our area
who has broke into houses but he just stands in the sleeping peoples room and
watches them sleep. Well, until the homeowners wake up, one lady chased him out
of her house with a hammer and another guy chased him out the yard with something
which escapes me. I have been a little jumpy.

We also have something living in our attic. Something big. About 4:15 AM it goes
tromping around in the duct work and it wakes me up because it sounds like
a truck with a diesel engine is driving across the roof.

Monday I had my son go upstairs to
his room and slam his closet door, slam the bathroom door, jump on the bed
all of it, I couldn't hear any of it in my room.
Tuesday at 4:15 AM the BIG THING is walking around over my head. I was very still
and listened to it tromp around and then as it moved through the house, it was gone.
I got up thinking that maybe I had better check and make sure that
creepy guy isn't standing in the living room or something.
I got up, it was so hard to open the door of my room but I did, and everything was very
quiet.
I went back to bed, I was starting to doze off, then I heard it, someone was trying to
get in the back door. I thought, maybe it was my imagination. It wasn't something
was turning the door knob and rattling the door. I got up again, I
went sneaking out of my room, I really don't know what I would have done if
someone was in the house, maybe run real fast. Anyway I crept out into the living
room and it was really dark, so I turned on the light and there looking in the door,
was my cat. Yelling his little cat head off, I don't write about my cats. I have 5 cats.


My son found Mouse abandoned in the cold, thrown out of a car he was so small my
son carried him home in his pocket. Hence his name. Then Mouse started
growing and he is huge, he weighs about 25 pounds. But Mouse had such a
hard life in the beginning he is full of problems.
He is afraid of the dark, new people, the doorbell, outside, loud noises,
just about everything, he lives most of the time under my bed.
So for him to be outside was so strange and being such a big cat,
he is very strong. He has ripped the molding off my bedroom door
so many times that I don't know what we will do next time.

My son got up in the attic today to see if he could see anything, but he couldn't.
I found a dead possum out in the pasture last night and yes, it was dead, not
playing possum. I didn't hear it last night so I am hoping that is what it was.
So I hope you have a very nice Thursday, I know I will.
I know that I get to sleep tonight and that is always
something to be thankful for.

I've been nervous about the creeper, myself, but this place is so small that if somebody tried to break in, I'd have time to get a butcher knife and cut off various extremities before they got all the way in.

Could a possum have been living in the attic? How would he get in and out, I wonder? Maybe 110 degrees in the ducts killed him off. I'm glad Dad is home now. :-)

Yeah me too. I slept better but not much better. The heat is just so extreme. There is not a breath of cool air today. It was 85 at five thirty.
It wasn't that hot yesterday.
I feel sick today, I think from being outside in it so much.

A possum?? Yick. Hopefully that was it and it's dead now. I was thinking maybe you have a very limber skunk in your attic. I just hope it's gone now. I didn't know dad's been gone! I know the night that Ben worked from midnight to 8 I didn't sleep at all either. It's just too weird. I'm glad he's going to be back now.

Yeah, life is just so much nicer when they are home.

oh my goodness, all the commotion on your
farm makes me feel lazy and decadent.

that creepy guys sound terrifying. i hope
someone catches him.!!!

ohmygosh, Kim...this post just scared me! Thumping and bumping in the attic, a neighborhood creeper...what next! So glad your honey will be home tonight so you can relax. And, that heat...ohboy...not liking that, but be sure it stays there and doesn't come this far east. Please.

A creeper in the neighborhood? clanging and banging in the attic? husband out of town, it's no wonder you can't sleep.Sounds like a good story line for a book!

A creeper? I would make sure that my doors are locked at night and have my cell phone by the bed. Not sure what would make all that noise in the attic.

Hi Kim,
I am so glad your dh will be home tonight too. I hope you find what ever it is that has taken up residence in your attic. And if it was the possum,aren't you glad it didn't die in the attic? lol What kind of a person would want to watch others sleep? Maybe a nut. LOL.
Much love, Sue

Kim, I've said some prayers, that creeper is caught soon, and BEFORE he comes in another house. Angels watch over thee, but yeah, snuggling up to your dh makes sleep easier 4 sure.

Heat makes me sure that winter can't get here too soon. But then again, winter in Houston really isn't bad...