Locked in The Chicken Coop. 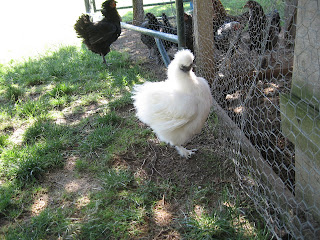 No this isn't a picture of the chicken coop, this is
my Silkie outside the coop, I was locked in her coop
for about 30 minutes this afternoon.

Every afternoon, before I start dinner, I go outside and
water my hens, collect eggs and water the garden. It is just part
of my routine.
Today, I didn't take my cell phone, I thought to myself, I am just
going out to collect eggs, I will be right back. Ha!

It was kinda hot and I was changing the water in the big hens
coop and sometimes they are escape artists and they stormed the gate
and made a break for it while I was getting them fresh water. I thought,
I will just let them run around the back yard for a bit while I do this.

In my little coop I have my Bantam chickens. I went in to kick a couple of
little hens off the nest because they are always broody. I got some eggs from
the other little hens and then walked to the door to get out.

It was locked. I thought Oh, No!! I really did start to panic. I had to sit down
because even though I like sitting out with the hens, this was not that day.
I sat there and thought oh my gosh, what would Sidney Bristow do? Since I am
a huge fan of that old show called Alias and I have watched Sidney escape from
many situations, and I am not in heels or a wig or skimpy clothes. Not to mention
no one is after me.

I looked around the coop for a lock pick. I had chicken feeder and a water container.
Nothing. Then I thought well, maybe a feather would work, so I found a long wing
feather and tried to push the metal thing with that. It just broke the feather.

I tried yelling at the house. It just scared the chickens, they started flying around
making dirt fly in the air. I have left the water on in the garden, and all I can think
about is that my husband won't be home for at least another hour. The kids are not
even going to come looking for me until they realize that dinner isn't on the table
or there isn't dinner preparation going on. I just talked to them before I came outside.

I sat down of a piece of wood, at least I had my I Pod in my ear and I had music to listen
to. The wind came up a little so it cooled the sweat running down my face.
Then I got mad at myself for not learning anything about taking over a city
with a toothpick and piece of gum, from all of those T.V. shows I have spent my time watching.

So I stood up and jiggled the gate, it wouldn't budge. The latch is over my head and
I never realized until then that I stand on my tip-toes every day to unlock the silly thing.
One thing I also noticed is that it is a pretty safe coop if I can't even escape.
So I thought what if I push my hand up through this crack and I pushed and my hand
touched the latch. Except, I pushed it the wrong way and really locked it.
I had to put my arms down and I pushed my hand through the wire again and
I could just get my fingers on the latch again, so I pushed with my fingertips and
I felt it move, so I kept pushing and then while I was praying, " Please God make it
open," it just opened.
It was sort of anticlimactic the dog was having fun stalking the chickens all over the
back yard, I collected eggs, the house was quiet except upstairs where the kids are
playing a game with friends. No one even knows that I was locked in the chicken coop.

That won't be happening again, I can tell you that. It is much nicer to sit outside
in a lawn chair than in the coop.

I will take my phone from now on.
Have a great Friday!

"Then I got mad at myself for not learning anything about taking over a city
with a toothpick and piece of gum."

Oh my gosh you are hilarious. That must have been terrifying though. Especially in the little one, it's so tiny.

Yeah you wouldn't think it would be, but when I came into cook dinner I was so happy to be free. :) I don't think I would be a very good inmate.

I love your little story...something I could find myself doing! I am glad it was a happy ending and you didn't have to wait for hours with the girls.
I love your blog...just popped over from Joyces.
I think you are soooo blessed to have chickens...something I have always wanted...happy weekend

oh, too funny! i will always think of you as sidney now.
i was mad about that show, too.

i don't think she ever prayed, though. :)

i'm sorry. i didn't want to laugh, but i did. (another giggle is escaping now - i'm sorry - uhem - serious face). someone driving by may have thought, "now THERE'S a way i can get some *alone time*! what a smart, clever woman!" and then they'd just wave and sigh with envy.

Oh dear sounds just like something I would do. Glad you made the great escape.

Oh my gosh, that was hilarious! We got internets back, so I hopped to your blog, and this is what I saw. Oh man! I'm so glad you got it unlocked finally! Definitely take your phone next time.

So I read this, then I read that Pioneer Woman has not only broken her iPad, but she also just dropped and broke her iPhone. So it must have just been an eventful week for everyone.

Man alive do I feel better after reading your post. I can come clean.... this has happened to me not once but twice. First time the door to the coop run latched tight, but fortunately for me I could sneak my index finger through the wire and unlock it. Second time, the door to the coop house slammed and the hook flipped up and went into the eye. I just stood there dumbfounded. I mean what are the chances of that! Thank goodness it was the weekend as DH was home. I hollered "Honey I'm locked in the coop" I could tell what he was thinking by the look on his face, but not a word was uttered!

Hi Sidney, umm I mean Kim :) We loved that show too and really miss it. I'm sorry I laughed alittle too as that is a great story, but it's so hot I feel really bad that you were locked in the coop. Thank goodness you escaped! Thanks for visiting my new blog. I missed you!

Kim, I am laughing so much, so please forgive me, this sort of thing usually happens to me.
But seriously, I would have panicked as sometimes my dh is gone for hours, and I don't usually take my phone, but trust me I will from now on.
I wonder what the chicks were thinking, Something like"well lady now you know how it feels to be locked up!."
Hugs,
Sue

It has been worth it I think to read all of your lovely comments, I have laughed too. I have laughed so much today, and really, I would change my name to Sidney if I wasn't used to Kim. :)

That's happened to me before. It was me and my son in the rabbit pen. My hubby locked us in by mistake and we only noticed 10 minutes later when we were done playing with the rabbit. By then, Hubby had started the chainsaw to do the woodpile. Needless to say he didn't hear us. We yelled for a couple of hours (ok, maybe 10 minutes, I'm claustrophobic) before he heard us.

oh no! You poor thing!! my 7 year old just learned how to make toothpicks with his pocketknife...maybe you could just keep a pocket knife with you at all times! :)

Glad you are free now!

ohmygosh, Kim! I, too, laughed. Once I read that you got out, that is. (yeah, right) I would have been in a panic, for sure. When I take care of the animals for my neighbor, I am the only one around for miles, so I will remember this next time I need to care for the dang chickens. hahaha.

just get back to check-in from being gone on our Aug , Get A Way and popped in and got a BIG LAUGH - and giggling still -- O my goodness - I can't stop giggling - I can relate to this -- happy dance you gotten out and safe back in your home but laughing to know - know one ever knew you were in such a "fit to be tied" moment - a smile is left on my face -- see :)