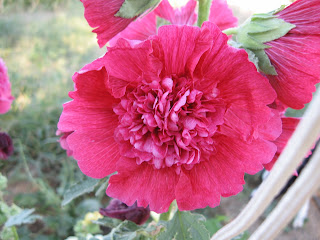 This is the last of my summer hollyhocks. It is a double.
I love how different it is from the ones in the early spring.
When I was a kid, my great-grandmother brought over seeds
from her hollyhocks that she said had been in her family for over
150 years and that they had been passed on all of that time,
She said she had gotten her hollyhock seeds from her great-grandmother.
My Mom was thrilled and she would carefully collect the seeds
every year. They were beautiful.
I of course don't have any of those seeds. Life moved on and things
like that were forgotten. 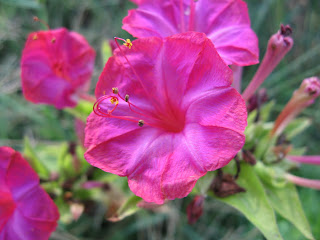 This is a 4'oclock. In my Grandmothers garden, she
planted 4'oclocks and azaleas and lilacs. She didn't
like to fool with things like my Mom did and my great-grandmother
did, she also had a job. Once the war (WW ll) was over and she was no longer
working for Lockheed, she liked working and kept
a job. It is funny because she at one time did beautiful
hand sewing like cutwork and she made lace,
but by the time I came along and was old enough to notice
she didn't do that any more. 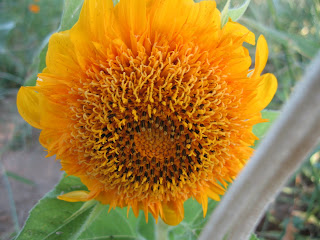 This is a teddy bear sunflower, but it is tiny, I should
have taken a picture of it, it isn't much taller than
a zinnia plant. I almost missed it because it was in between
all of the other sunflowers. I have to make sure I get seeds
from this as I have never saw a teddy bear so small. 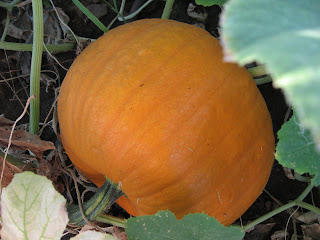 I had to give you a pumpkin update. Doesn't it look wonderful.
Pumpkins just are magic, I know that is why Cinderella's
fairy godmother turned a pumpkin into a coach for Cinderella
to ride to the ball.
We were at Disneyland once and there was a wedding going on
and the bride came to the groom riding in a coach that was a pumpkin
drawn by two horses. It was just beautiful. I have never forgot.
These are just pictures I found out in the garden as I was rushing
to get my outside work finished so I could come in and start my inside
work.
I hope you have a Wonderful Wednesday.

I love your garden, here at the end of the season, even. Take it easy today! It'll probably break 110.

beautiful flowers. your pumpkin is PERfect! (said like Martha S). i wished we would have grown them this year. sweet!

Love those hollyhocks and that pumpkin is looking good just in time for Fall! Yeah cooler weather is just around the corner.

I'm happy you liked my makeover. I figured why wait till the weight is off I'll do it now :) I think the only reason I'm brave enough to post my weight is because my blog is mostly just about me and only a couple people know about it. I'm hoping that by putting it all out there it will help keep me on track this time and maybe inspire others.

Thank you for the compliment, Kim you are so sweet! Yes, I agree making friends in blogland is better than being skinny!

Hi Kim,
Thanks for stopping by my blog and commenting. I've just been getting familiar with yours. (loved the locked in the chicken coop post) Funny!
I've added you to my side bar.
Kim

Hi Kim,
beautiful flowers, and your pumpkin is doing fine too. We have gathered a few of ours( whole new story there). lol I have got to make plans to gather some of my flower seeds. Hope school is going well, this week.I have been so busy today, making up for yesterday. lol
Hugs,
Sue

I soooooooo love the name of your blog...it combines my husband and my dreams. He loves the movie field of dreams..his Dad was a semi-pro baseball player...I want a small farm one day, so that is my dream...we will see what God has in store for us!
Your pictures are just beautiful!