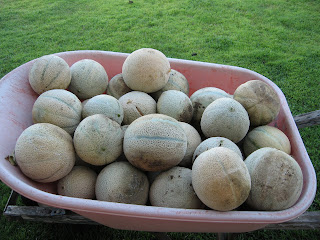 On Thursdays I like my post to be called Thankful
Thursday, and I am thankful but we picked this and
my chickens look at cantaloupe now and look back at me
with a sour expressions and it looks like they say," No,
no more cantaloupe."

Today when the girls came over they said," No, that they
had more cantaloupe than they had room in the fridge. I sent a bunch
with my husband to work. I think he might get to today too.
My grandsons said, "Don't wike cantawope."

I can't stand the smell anymore. I have at least
this much again almost ripe. I feel like the Israelites
when God sent all of the quail, I am so happy to have
it but gosh I am so tired of it.

I told the girls today, that next year in January when all
of my seed catalogs arrive and I am dreaming of gardening
and planting new little seeds, please remind of of August.

So what do I learn from all of this on Thankful Thursday?
I learn " Speak that word to me today, dear Lord; peace.
Let your calm spirit---through the many potentially
rough minutes of this day, in every task--- say to my soul,
Be still."
(A Lamp for My feet, p. 122)
"You will keep him in perfect peace, whose mind is stayed on You,
because he trusts in You."
(Isaiah 26:3)
One of the favorite stories in Streams of the Desert, is this:
"I went to America some years ago with the captain of a steamer,
who was a very devoted Christian. When off the coast of Newfoundland
he said to me, "The last time I crossed here, five weeks ago, something
happened which revolutionized the whole of my Christian life.
We had George Mueller of Bristol on board. I had been on the bridge
twenty-four hours and never left it. George Mueller came to me, and said, " Captain,
I have come to you to tell you that I must be in Quebec Saturday afternoon."
It is impossible," I said. "Very well, if your ship cannot take me,
God will find some other way. I have never broken an engagement for
fifty-seven years. Let us go down into the chart room and pray."
I looked at that man of God and thought to myself, what a lunatic
asylum can that man have come from?" I never heard as such a thing as this
"Mr. Mueller," I said, "do you know how dense this fog is?" " No" he replied, "
my eye is not on the density of the fog,
but on the living God, who controls every circumstance of my life."

He knelt down and prayed one of the most simple prayers, and when
he had finished I was going to pray; but he put his hand on my shoulder
and told me not to pray. "First, you do not believe He will answer; and second
I BELIEVE HE HAS, and there is no need whatever for you to pray about it.
I looked at him, and he said,"Captain, I have known my
Lord for fifty-seven years, and there has never been a single day that I
have failed to get audience with the King. Get up, Captain
and open the door, and you will find the fog gone." I got up, and the
fog was indeed gone. On Saturday afternoon George Mueller was in Quebec
for his engagement.
(Streams of the Desert,p.257-258)

I read that when I was a young believer, and still I long to have that kind of faith.
I think I am closer than I was when I first read this. But still so far away.

I will share this story. Last November, the doctors called the family
in to be at my Mom's bedside I had to go, it was a week before Thanksgiving,
I was going to leave my kids and I was going to have to trust God. Everything
in me was afraid, afraid of leaving my kids, afraid of what I was going to see
when I got there.
We drove because I don't know why but I just couldn't think of getting on a
plane. We took a motor home.
My Mom was in a hospital in Texas and I am in California.
I forgot how far it is.
When we were one day from home, I met my Waterloo. My brother called
to tell me how bad it was and it would be okay if I didn't come, but that
my Mom kept asking for me. My kids were at home alone and they were
okay, but I was still torn. I just didn't know what to do so I prayed.
We got on the road and when we were at the place to go either to
Texas or back to California there was this truck.
It was just there in front of us. 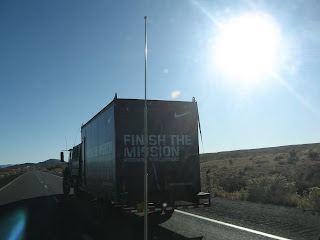 It is not a very good picture but it says on the back
Finish The Mission. One the side of the truck,
it says, Prepare for Battle.
We both cried, God had answered us so clearly.
He had told me what to expect but I knew that
I would be okay. God was with us.

I was thinking of this when I read this selection in
Streams and I may not be a George Mueller, but
I have the same God and He still does miracles.

Great reminder this morning!
I love this: "I may not be a George Mueller, but
I have the same God and He still does miracles."
AMEN!!

Wow Kim! You had me in heart palpitations with the first story, but the second is every bit as powerful! Thank you for sharing these stories, these are great faith boosters that will stay with me for a long time. Gotta get that book!

Oh Kim, both stories were incredible! I was inspired by George Mueller's story, but yours is just as inspiring. Thank you for sharing both of them.
I love that you took a photo too.
Blessings,
Marcia

I had to take the picture because I just didn't think anyone would ever believe it. When I sent the picture home to my kids it did huge things for their faith too.

Beautifully said...Such a great reminder to keep the faith.

Well, all I can say is "my or my" how my girl's would love to put a beak into one of those beautiful cantaloupes! Sometimes, it can be a simple act to let us realize that one's God is always with them.

I just wanted to tell you that I shared these stories tonight with my family at our dinner table. They were really so inspiring~
Blessings,
Marcia

Oh my dear what a tender story...I think when we pray for specific things, He answers in many different ways...we just need to pray for the wisdom and foresight to see the answers He gives
...such an inspiring story...thank you for sharing this God moment with us...still smilin' Rosie

Hi Kim! Wow, that's a lot of cantaloupe and it looks good! "Finish the Mission" that is a very clear sign!