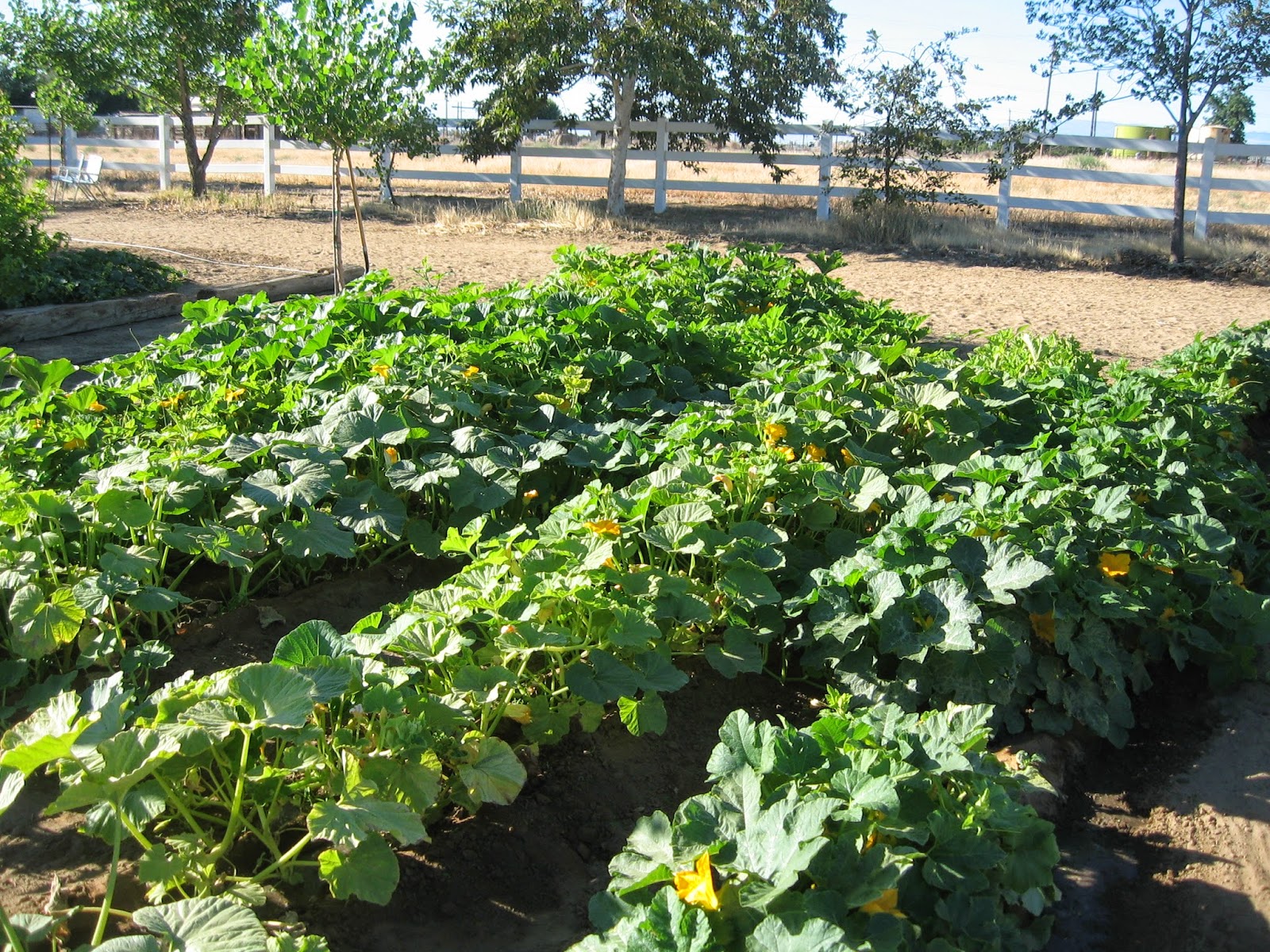 I wanted to show you a different view of the pumpkin patch.  I know you can't tell this but the plants are now up to my waist. They have grown so much. I don't think I have ever had a year when the pumpkins plants looked this nice. Tonight we are going to crawl around putting a teaspoon of Osmocote  and work it into the soil around the base of the plant. It is a time release fertilizer. The tomatoes and peppers will get their shot of Epsom Salt. I really have never babied a garden the way I am this one. This morning very early, two of the boys came out and they said, " No wonder you two stay out here in the early morning, it is so peaceful, it is like being at the beach." Up until then they act like we are a bit cracked. We spend so much time out here. 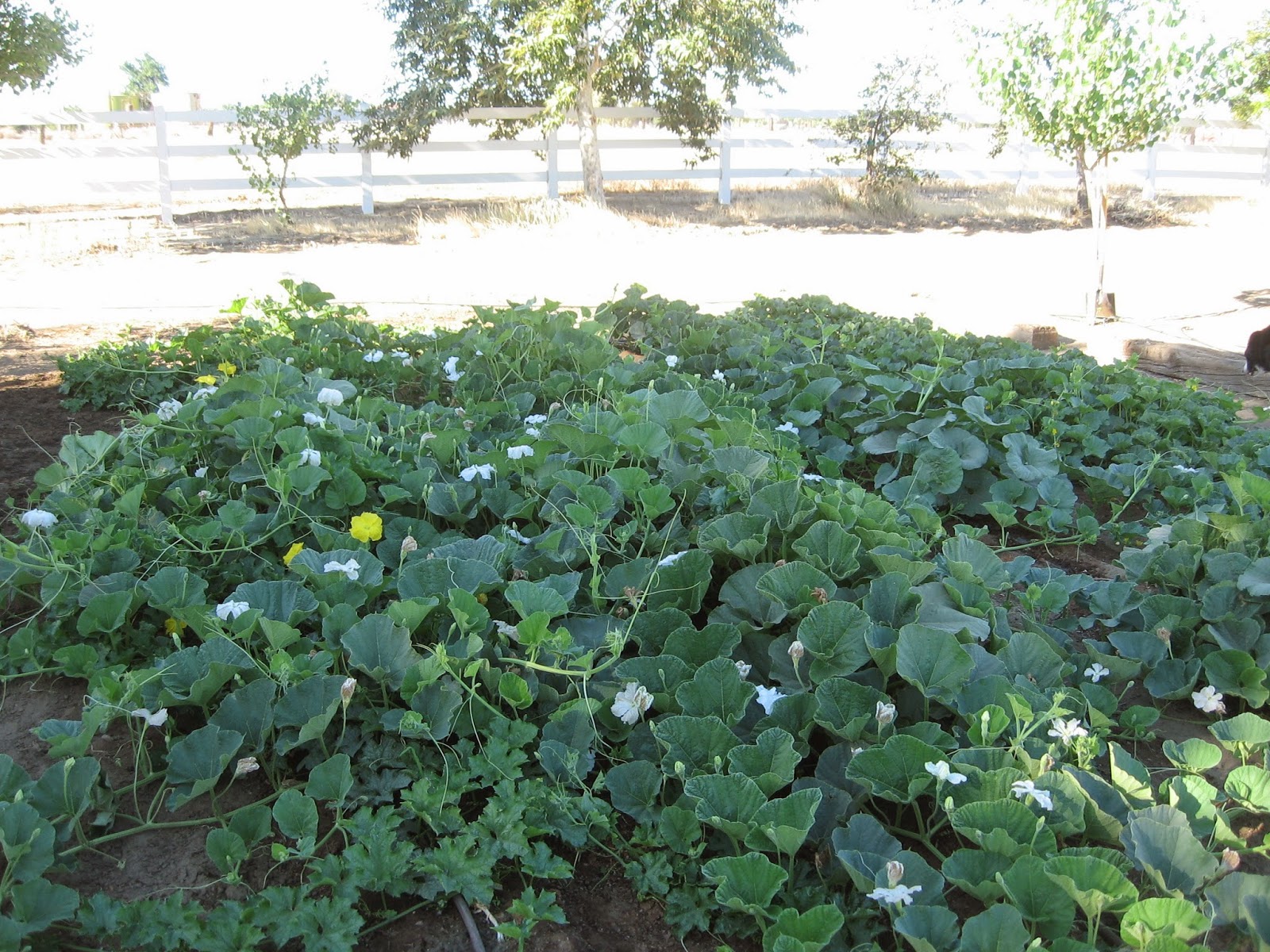 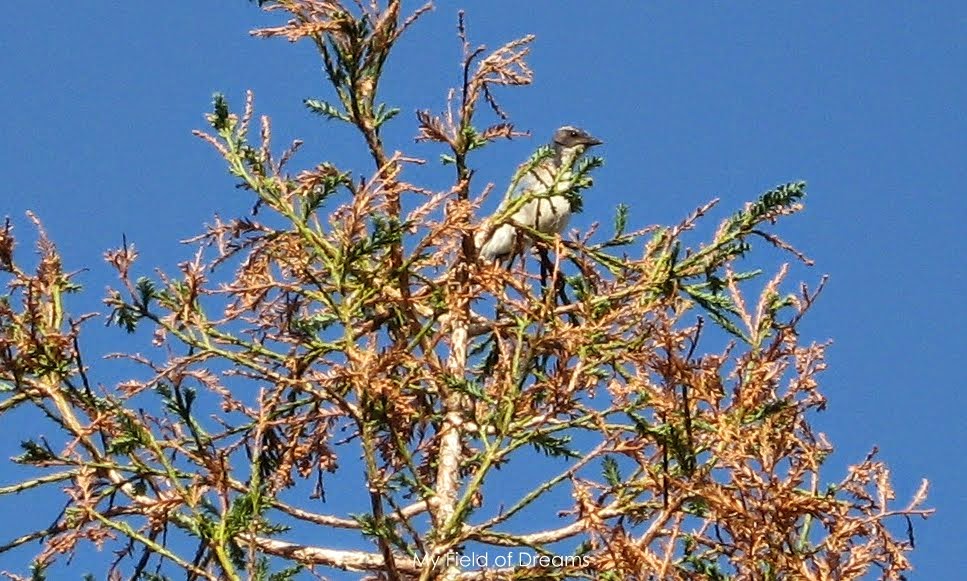 Do you remember the baby blue jay that fell out of the tree around Easter? The male and female blue jay had another baby. They drove this guy off and then had a new family. When the newest member fell out of the tree, it barely had feathers. Not being the best of parents, the poor thing died. I picked it up which was a mistake because the parents saw me. I took it and buried it. Remember how the male blue jay has been my friend and followed me? Not since I took the baby. He just left. The Mom for three days followed me around the house, what ever room I was in she would sit on the railing and scream obscenities at me.
It was traumatic for me. I was even folding clothes in the laundry room with the door shut mind you and she came right up to the door and screamed at the outside door. I felt like I was in some kind of a horror movie.

She was screaming at me one evening as I was watering my chickens, " I told her that it wasn't my fault she used two sticks to build a nest so her baby fell out, she needed to get with the program and build nests better." She stopped screaming and flew off, since then I don't see either one. I had nightmares for two nights over that baby bird! 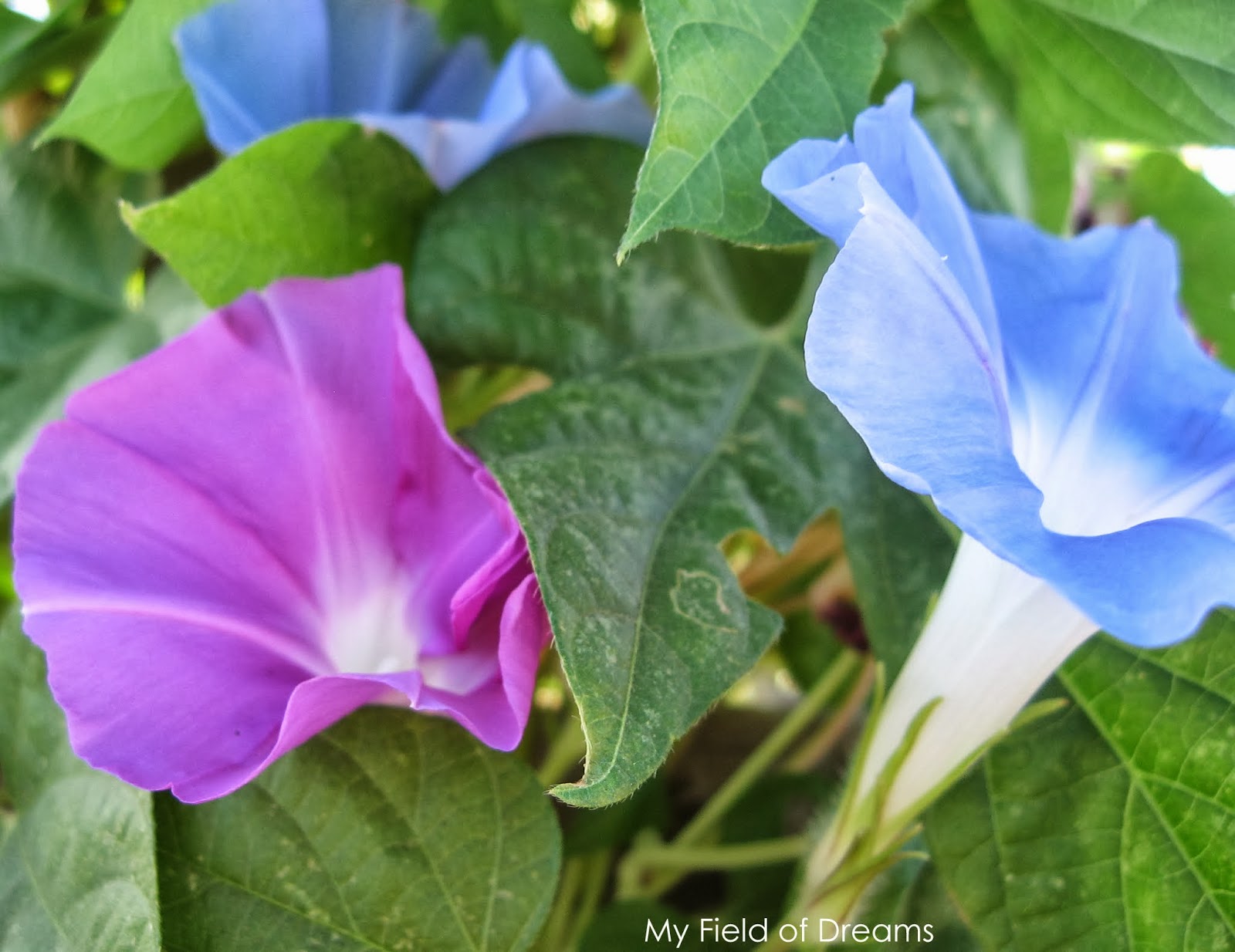 It looks to be a busy week around here. Lots of good things to get done before people start arriving. It should be a fun week. July will show up and be hot all month. It is summer after all. My challenge will be if I can keep my garden weed free for July.

Have a wonderful new week.
~Kim~ 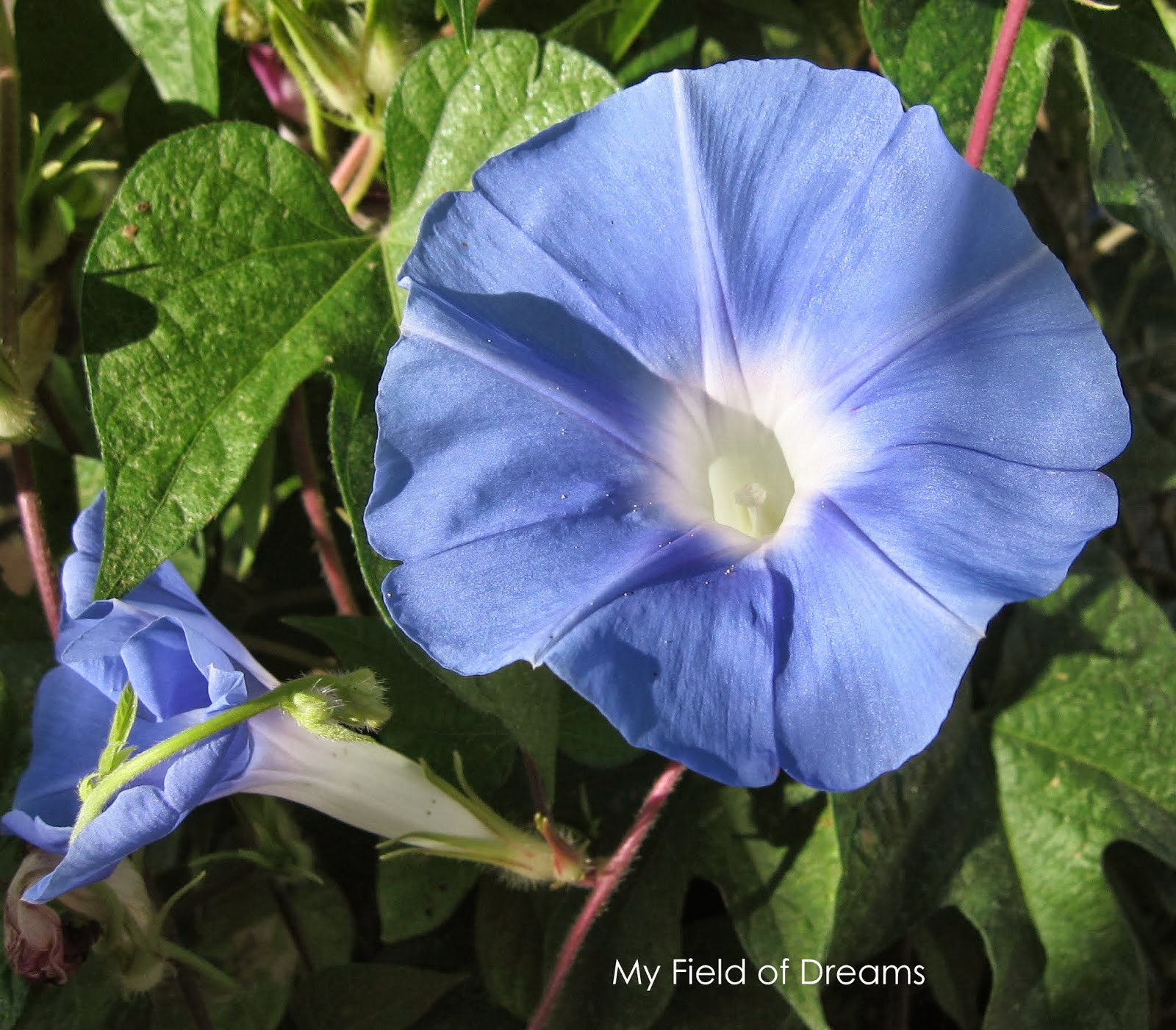 awww! baby bird trauma! hard to explain to the adults that it died before you took it away.

Your gardens look wonderful So green and beautiful. Lots of pumpkins on the horizon!

Birds. I've had a hate affair with them every since Hitchcock. That pumpkin patch is FABULOUS!

You and I are just alike about that baby bird. I would have been so upset. And now I know that I am a total idiot---or else just quite lucky to have you to educate me--I had no idea that luffa sponges were plants. Sheesh.

Blue Jays are very loud birds and often 'bully' other birds. Creepy to have one follow you around after you handled their 'youngster' ! Your gardens look wonderful and lush. Hope you have a wonderful week with family.
Rose

I agree about the garden being peaceful ... if I can't be at the beach, then I'd like to be in the garden. Of course, my garden is teeny, tiny compared to yours, but still ...

Your garden looks so fabulous! Have a great week with your family! xo

I do love hearing about your garden, and the scene i have pictured in my mind is calm, serene, and peaceful like you said. But! full of life, and promise too. Enjoy your day!

You make me laugh about talking to the birds and they understand. You are a regular Dr. DoaLot as opposed to Dr Dolittle.
Your garden looks so amazing.

Have a great week.
Hugs,
JB

Those pumpkin vines just get me! They are so beautiful, and to think that you will harvest beautiful pumpkins before too long. It's magic!! :)

Benjamin Franklin had the right idea even all those years ago!

That's an odd story about the blue jays. They aren't known here as being the nicest of birds anyway.

I'm anxious to see the results of all those lovely pumpkin vines!

omgoodness, you are going to have a lot of punkins!!!

birds are just like humans, extremely protective of their babies!!

Oh my...you are "the bird whisperer" That's funny how the mother blue jay gave you a piece of her mind and you told her the facts...guess even birds don't like to hear the truth.

Your pumpkin patch looks wonderful, can hardly wait to see the end result of your hard labors.

Your gardens are growing so nicely.
The blossoms on the gourds are really quite pretty.

Sorry about your bad experience with the jays.

Best of luck with all of your preparations! Hope you have a great time with all your loved ones :)

I have three pumpkin vines. I think they will supply all the pumpkin we can eat. Beautiful in your garden.