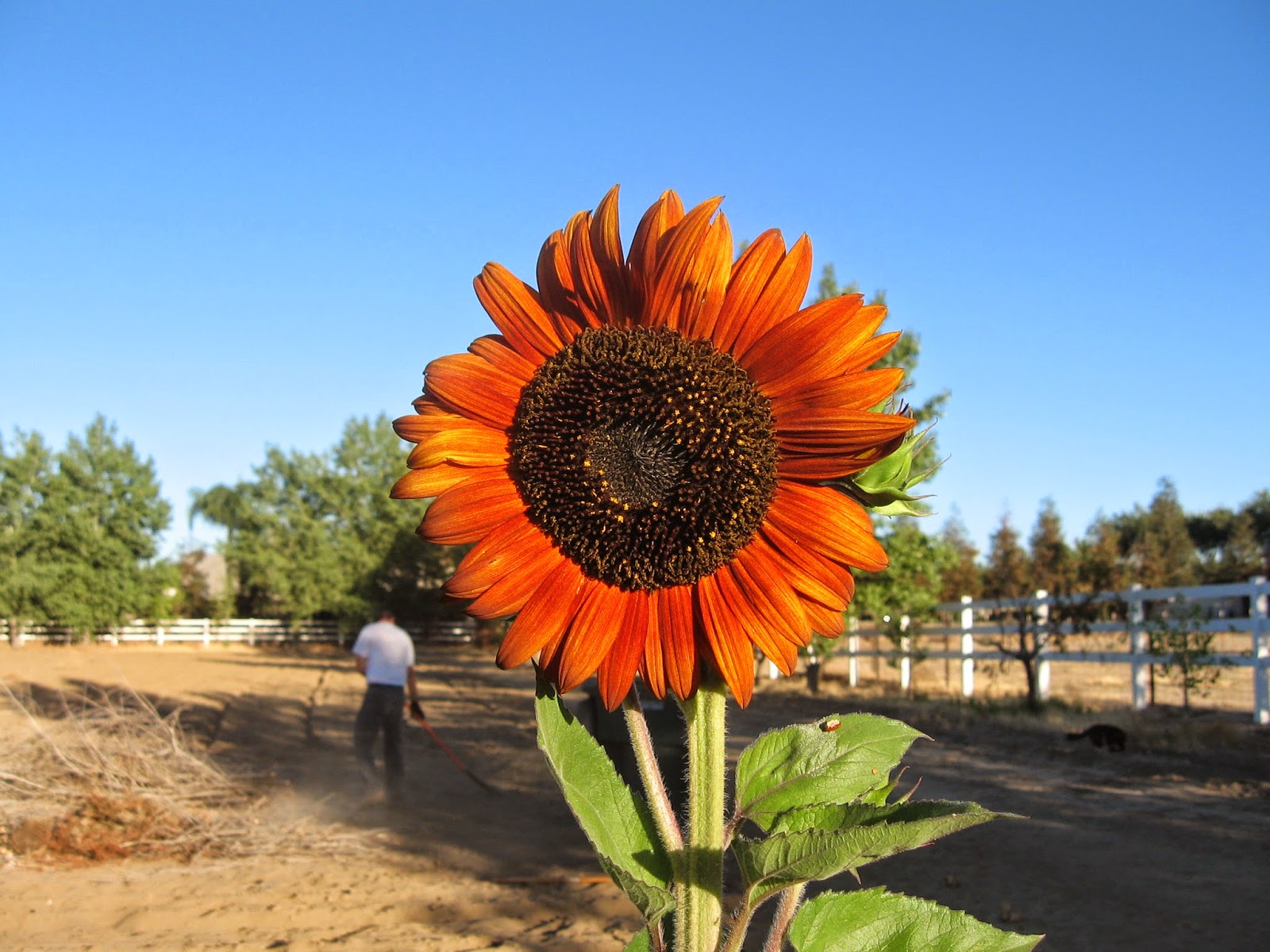 See this photo? I was taking a picture of the sunflower. In the background Ron is working. See how it really is around here? I go around with a camera and he has the rake and is doing the real work of making it looks nice around here. Even now, I am in the house writing a post and he is out there finishing up that wood pile. (I am supposed to be in the kitchen making my squash relish.) 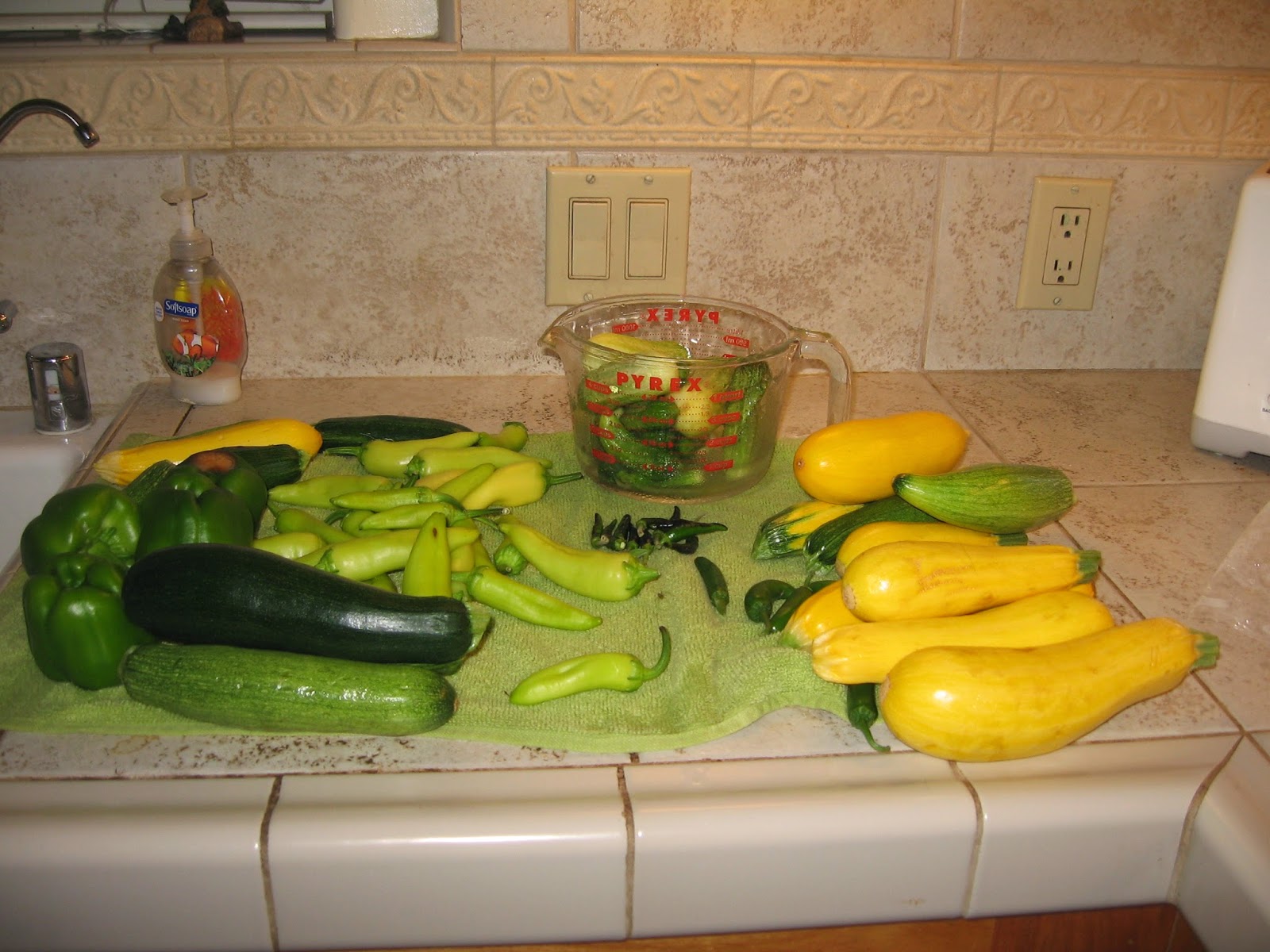 I picked this yesterday. I only got two jars of pickles and two jars of yellow peppers made. I did get 12 cups of squash cut up for my relish. I went out this morning but nothing is big enough to pick yet. 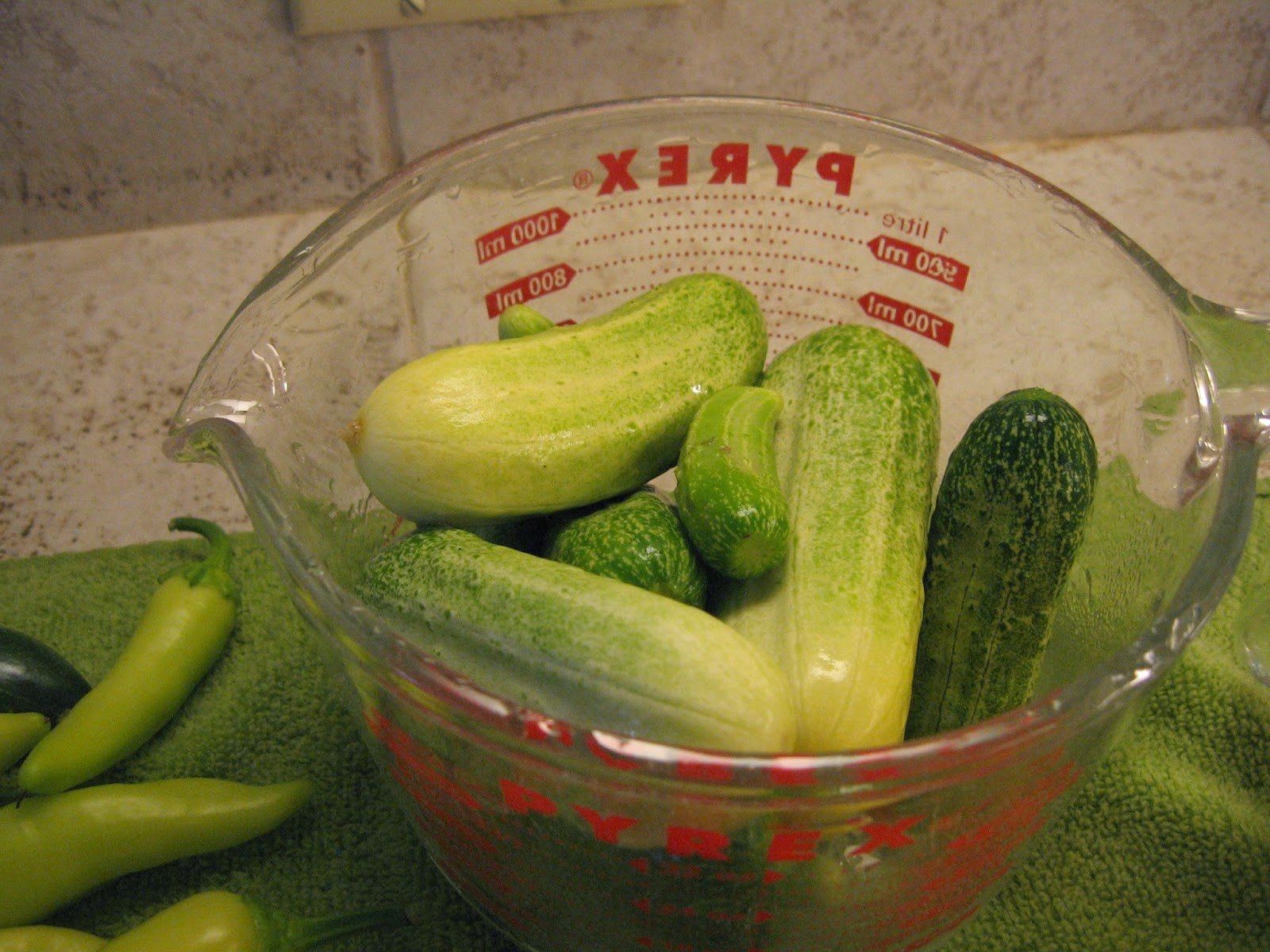 Look at all of the lovely little cucumbers. After last year and not getting a single cucumber I just stare at them and they make me so happy. I think this garden is really going to my head.

This morning I took some pictures of the pumpkins. They are going crazy too.

It just amazes me that planting sunflowers next to the pumpkins works so well. I will do it with more of the pumpkins next year. 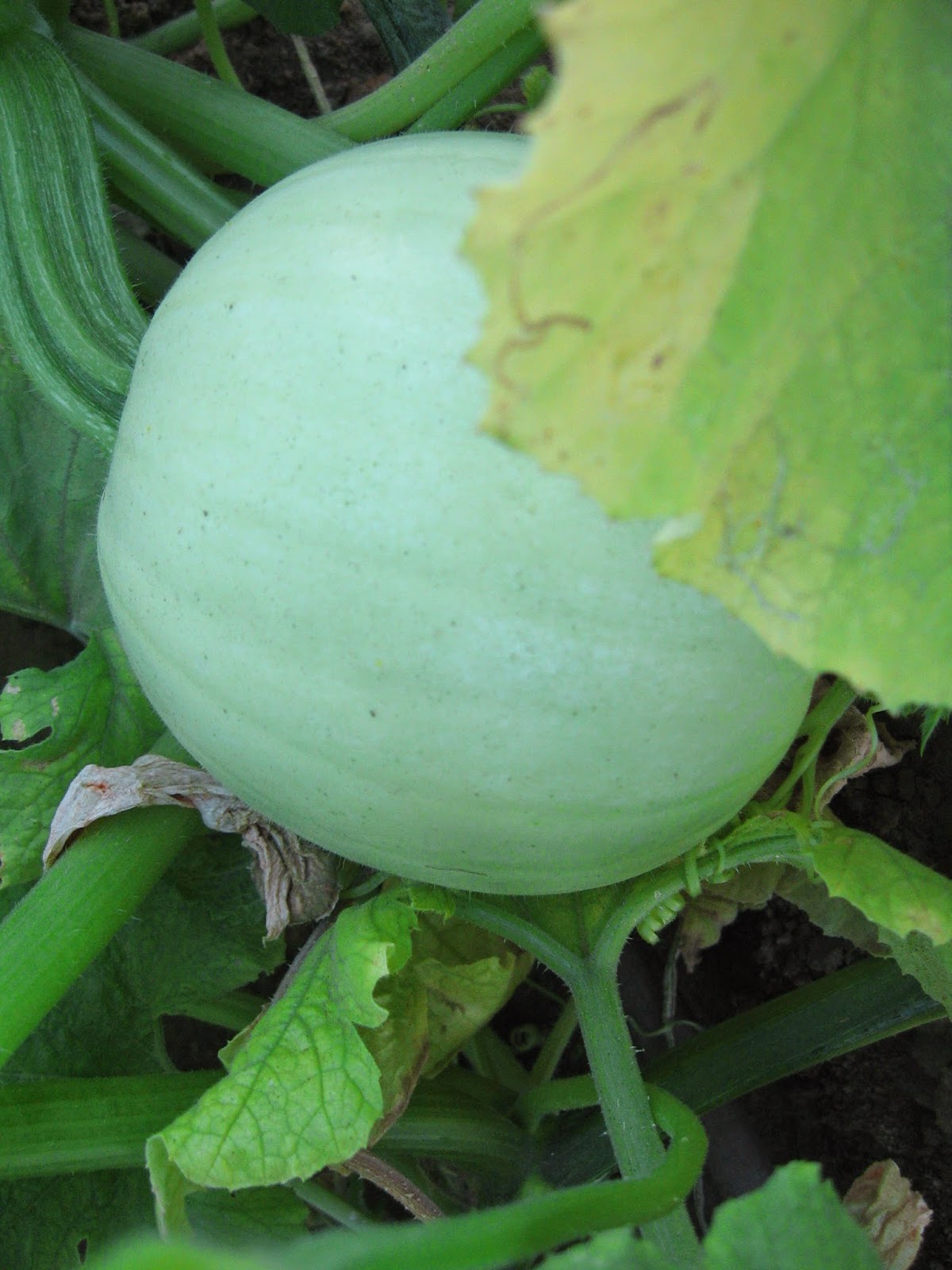 This one is called Moon-glow.  It will be white. I have some white Jack-Be-Littles too. My biggest fear out here in my pumpkin patch are white flies. The scourge of the earth. The make that sticky stuff that just will kill the vines. That is what destroyed my garden last year. That sticky stuff that they secrete smothers the plants.
That is why I am not an organic gardener this year. We have been using Seven and that has worked pretty well, and it doesn't bother the bees. I am hoping it will deter the squash beetles. Next week, starting Sunday it will be triple digits running 100-110. That is when it is hard on the plants and the bugs seem to take over. 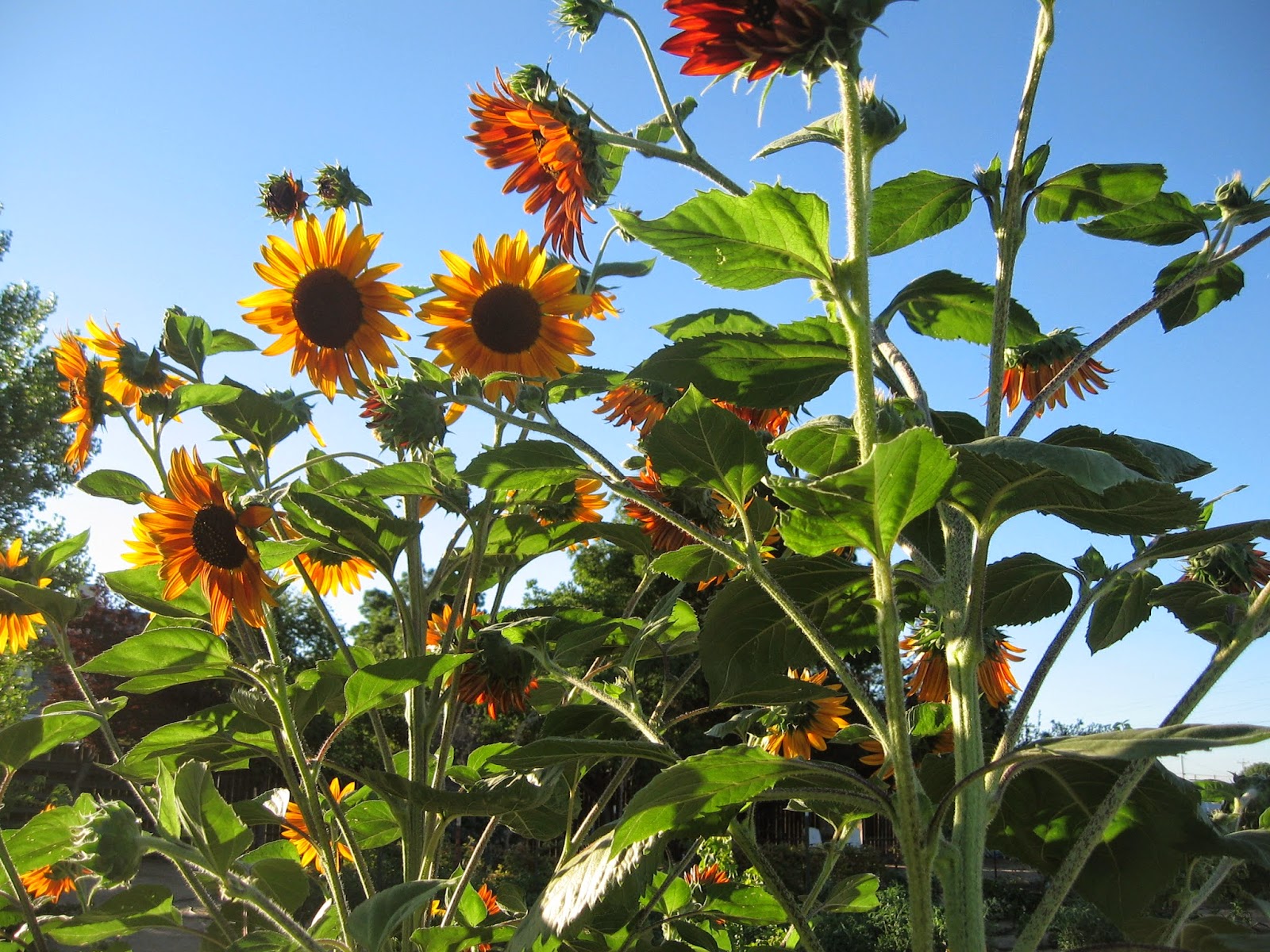 This is sort of like a hidden picture. This was full of tiny little finches. I never can capture them on film. They were just chattering away having their breakfast.

Have a very nice weekend. Next week, all of my grand babies and my kids will be home. I feel like it is going to be Christmas all week. I am really getting too excited. I get to hold my grand daughter whom I have never seen in person. Life is so good. 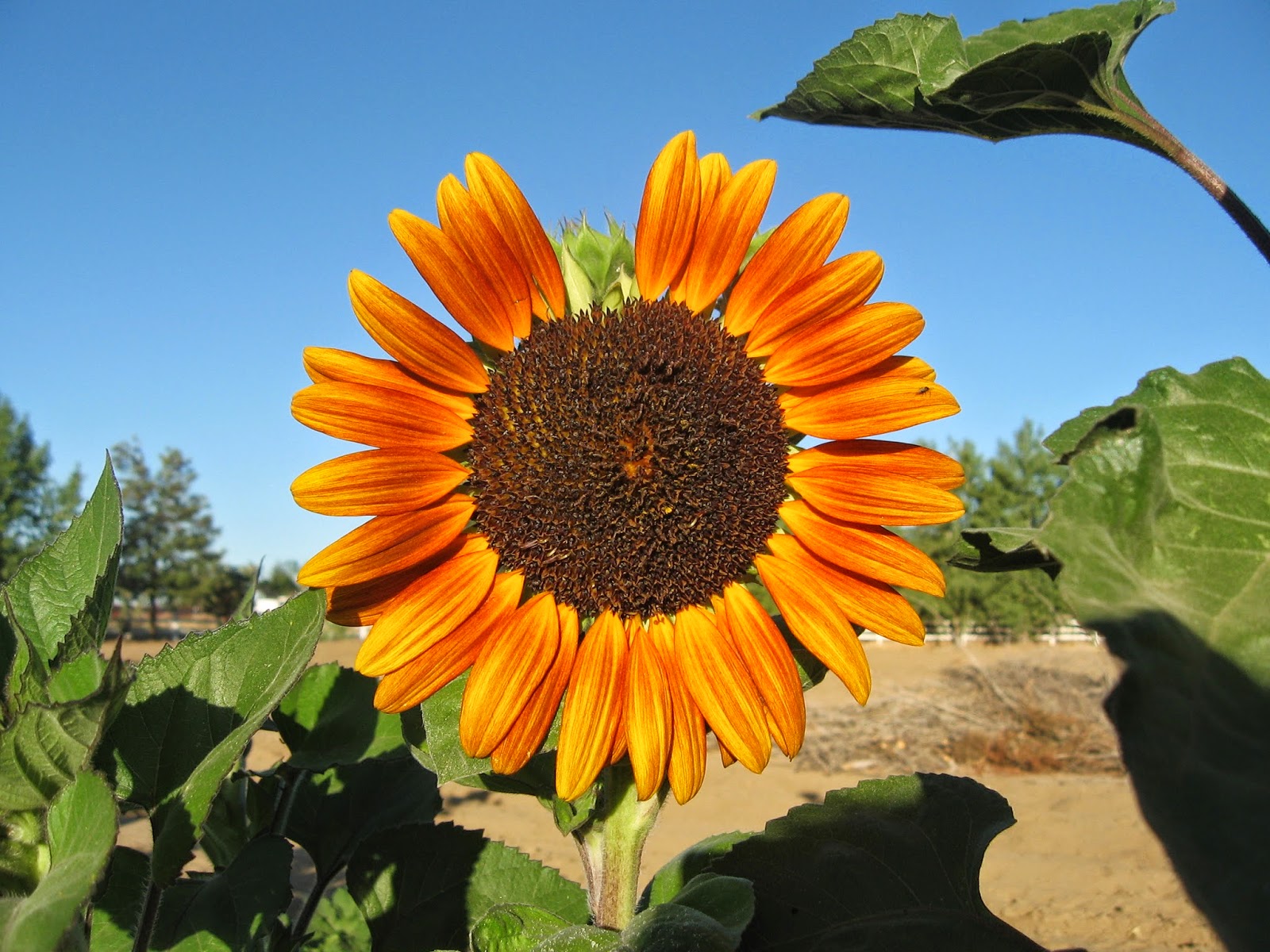 ---And they lived happily ever after---
The End.
Because you know fairy tales do come true.
Posted by Farm Girl at 9:29 AM

Aw! I'm so happy for you! You'll have a grand time with your family! Fun!
The pumpkins are so exciting! They make me so happy about FALL, which I know is a million minutes away, but still . . .
I hope the relish turns out fine!

i like how you're goofing off and ron is hard at work. :)

awww you both work so hard!! and when he comes in he rests, you are hard at work in the kitchen!!

My Hero works I take photos too:) someone has to do it right?:)
Relish sounds good your garden is beautiful. I hope the white flies stay away. Hug B

Dear Kim, Your garden is wonderful!! It should make you happy to see all that it has produced and get to enjoy.
I hope that you have a wonderful week next week and it will be a Christmas blessings for sure; enjoy each and every minute!
Blessings dear. Catherine

What lovely produce, Kim! Things are really growing well for you. I hope you have a good week-end. xo Nellie

More goodies from the garden...lovely! Have a great weekend...and next week, too! xo

What a sweet husband you have there.
Hard working, and I'll bet he doesn't mind one little bit if you take pictures. If it makes you happy, then I imagine you being happy in turn makes him happy :)

Nice growing gardens!!
Way to go with the cucumbers too.

I should think you are practically bouncing with joy knowing all your children and grands will be there.

Have a wonderful weekend!

How I wish I had a husband who clean my yard and gardens. I would take so many more pictures of him working in my garden and yard to post on my blog, lol. I work and I have to run inside to get my camera and run out to take a photo and a while later I run back in to get the camera again and so it goes, lol.

I'm amazed at how well your garden is growing in that hot and dry weather. I'm jumping for joy that you're so happy all the time I think we should all get our eyes fixed too......

Mor joy in store for you when the kids are all home. Take lots of photos, they are growing so fast.

Have a happy weekend.
Hugs,
JB

Wow this is such a beautifully colorful post! All my favorite greens and oranges. Isn't it truly wonderful when those clouds of tiny finches settle in for a while with their tiny little melodic voices as they flit from here to there so quickly! I can hear them in my mind. Oh boy, oh boy, Autumn pumpkin time is almost here! But in the meantime we will enjoy the fruitful Summer with all her bounty. And your place seems very bountiful indeed.

I'm so happy for next week. You will just be in heaven. And I bet you will have at least one grandchild in your arms at all times. Enjoy every minute

I love seeing your garden. Someday I hope to have as much harvest to share on my blog as you have on yours. We're obviously a few weeks behind you all. I'm trying to garden organically ... so far, we're not having any trouble with bugs ... a few leaves on our beans show some evidence of something eating them, but as long as it doesn't get any worse, we're going to hold off on doing anything "major".

I am just so excited for you to be able to meet your new little granddaughter ... and to have all your family with you. So happy for you!

I can't believe any bugs could survive 100-110 degree heat !!
I hope you have a wonderful week with your family ;)
Rose

I am such a squash fanatic! Please share your recipe for the squash relish! I always enjoy seeing your pictures!