Skunk in the Henhouse 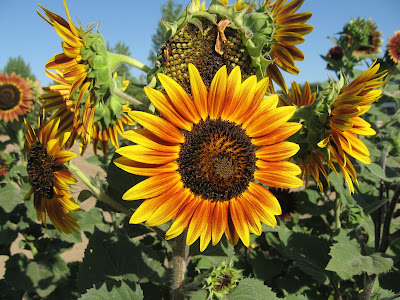 Early this morning, 1:45 to be exact my Momma hens started this screaming of terror. I was asleep. Sound asleep and as soon as I heard them I knew that something had got into the coop. I jumped out of bed, in my nightgown, no shoes, opened the door and started running as fast as I could to the coop. Sasha was ahead of me and she got there first.

Ron had sense enough to grab the flashlight, I was trying to see and the chickens were flying and chicks were crying and it was utter pandemonium. I was expecting a fox. The flashlight shined a bit and and I yelled, " It's a skunk!!!" All I could think of was Sasha was going to get sprayed. The next thing I thought of was I had to get it out of the coop. I ran to the door of the coop, and unlatched the door and swung it as wide open as I could. I ran back up to the house calling Sasha so I could put her in the house. When I opened that door two of the hens went flying out into the yard. Ron kept the flashlight on the skunk who ran out across the yard. 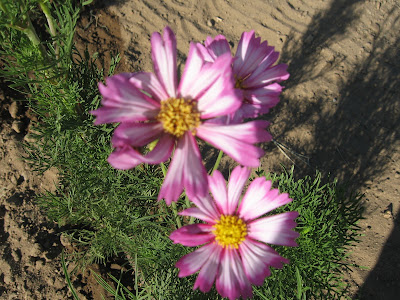 Chicks were out in the yard so I caught them and found the two hens who were scared to death. I got them back in the coop. I must have yelled a lot because after I got back in the house I realized how sore my throat is and how sore my feet were running barefoot around the yard.

We got back in bed I finally settled down around 3ish to go to sleep. Ron had loaded the gun and it was by the door. At 4:45 the hens started again. I still didn't take time to put on shoes. Ron grabbed the gun and the flashlight so I had to run with the flashlight while he looked for the skunk. I think that time though the hens are so traumatized they are going to scream at every thing they see. 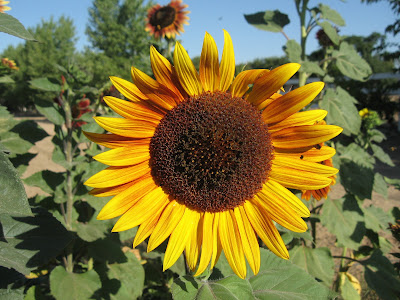 Today we will be making sure nothing can get in anywhere. This is the first skunk I have seen this year. I have no idea why we didn't get spayed by scent. We were so close before we even saw it.

On another note, I had a nice birthday. My sweet heart Megan, my son's wife brought over the boys to see me and brought me a birthday present.
She thought I needed some chickens so she made me some. 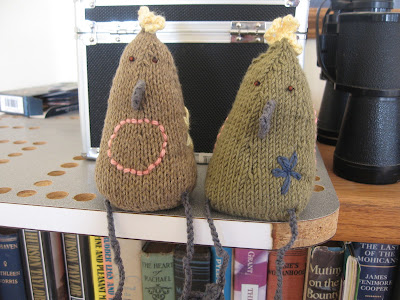 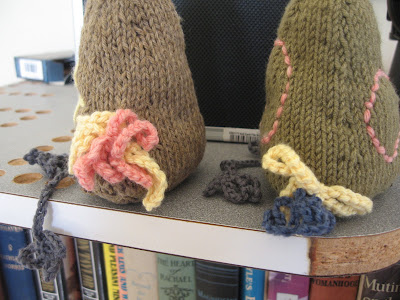 See the little tails? I thought they were so cute. She makes very cute zombies too. She also brought the wedding cake toppers that my son made. I have mentioned that my son is a machinist. He has his own lathe in his garage. Emilie is having kind of a chess theme for their wedding. She wanted chess pieces for the top of the cake. She gave her brother the chess pieces from a chess set and he made these for her.
They are just works of art and I can't wait to see them on the top of the cake. Now we all want him to make us a chess set with all of the pieces. 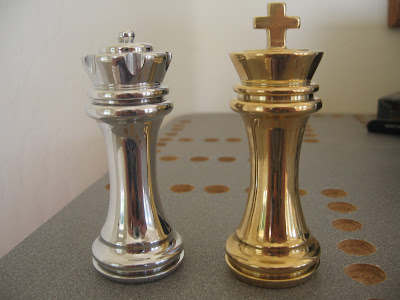 I think that is what has been fun to plan and do this wedding. It has been so much fun to see the talented
family and friends we have.

Thanks for stopping by today. I am so glad it is Friday.

I'm so glad you like your chickens! I had so much fun making them, I just giggled the whole time. Stupid skunks. At least there were no casualties. I was sure you would say it ate the babies.

oh my gosh, those chess pieces are GORGEOUS! how very cool!!!

and i love those little stuffed chickens! so sorry about the skunk trouble, but glad no one got sprayed!

Glad you are scent free and the chickens are safe.

Oops, and the chickens.

Oh boy! Glad you escaped without a spray. We chased a raccoon away from our chickens last night, as I was shutting them up for night. My husband has his trap set; he has told me it's my problem if he traps a skunk!

I'm so glad the skunk didn't get the chicks!! Stupid thing, you know that's what it wanted. I hope you shoot it. I love those chess pieces, though! He could have a side business making stuff like that.

I'm glad that you had a great birthday . Wow, those chess piece are awesome.


Oh my, I can picture you running and I'm sorry but I think that it would have looked hilarious to see you as you describe it. It sure would make a good comedy episode. You remind me of Lucille Ball.

On the other hand I'm glad that you got the skunk out. No one messes with your baby chicks ... heh.

I glad that the skunk was too stupid to spray, Ha,ha,ha. You'll be ready for next time.

You are really having a hard time to protect those girl and their babies. Maybe your husband will have to built a wire mesh enclosure all around the coop just so you can sleep secure in the knowledge that your babies are safe from predators at night. But then, there would still be snakes.Wishing you good luck with your little chicks.

Hugs & have a great weekend.
JB

Oh my...I would be so mad at that skunk if he/she ate the chicks! I hope you get him...and I'm glad you didn't get sprayed!! Your son did an amazing job on those chess pieces!

Oh my - what an experience that must have been! Thank goodness no one got sprayed. Whew!

Those chess pieces are just beautiful, and those stuffed chickens are so sweet. What talented children you have.

Happy Birthday my friend...Oh my what a night you had, did you lose any hens? I do hope not, I also hope no one got "skunked" sprayed. Very sweet little homemade hens from your sweet daughter in law. The chess pieces are certainly a work of art, crafted with love, what a talented family you have. I'm looking forward to seeing photos of Em's big day. Thinking of you, Julie.

I am so glad you didn't get sprayed. That would have been awful.

Oh so glad you didm"t get sprayed. Mountain man got a photo with a flash bulb at night of a skunk in our hen house with an egg in its mouth. How he did not get sprayed with that bold ( or should I say silly ) move I will never now ! HAppy Birthday fun new chicken ... love the tails :)

ooohhhh no, more skunk stories!! I knew they were coming!!

Birthdays are the best, so happy you had a good one!!

wow...what an experience! thank goodness no one got sprayed. Our dog Elvis did once and it was soooo nasty and bad...certainly don't want any repeats of that. The chess cake toppers are soo pretty. What an interesting and good theme. Cant wait to see everything. Enjoy your week-end!

Never a dull moment at your house, that's for sure! Your son did a fabulous job on the chess pieces. I immediately thought,'he needs to make a set for his parents.' LOL And those chickens = adorable!

I live in the city but we have a skunk that pokes around our neighbors yard but has yet to come in ours. I hope it stays away as we cannot use a gun to take care of it here. Happy birthday.

Oh, Kim! I am so sorry that I missed your birthday! I send along happy birthday wishes, though they are late. Our daughter and son-in-law who have chickens continue to find their flock lessen in number. Just this week, it is surmised that a fox came during the day and made off with TWO of them! No one wants a skunk around, that is for sure!

Oh Skunks are bad and they did to get under things.Ugh! We had a bad 2 summers with Skunks even in town. My husband got sprayed it was ugly!

HAPPY, HAPPY Birthday! As to the skunk...I've got one that roams the yard during the night and at dawnish. Wish s/hed move on; the dogs are going crazy.

Oh Kim, I feel so bad that I missed your birthday. I know if you are even a little like me you like a no fuss, quiet day. Happy Belated Birthday Kim! I can't believe you guys didn't get sprayed. I'm so glad the skunk didn't hurt the chicks. The chess pieces are gorgeous and true works of art. You must feel so proud.