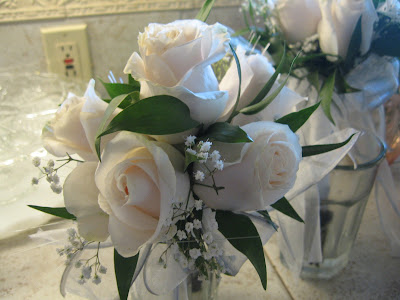 Well I am now in the new normal. Sort of I am still trying to give things back and clean things up and I have been doing this since the wedding was over on Saturday. We have had company so I have sat and talked a lot and laughed and really tried not to get choked up. On Sunday they were supposed to leave for their honeymoon, but they had to come back twice to get things they forgot.

It was a beautiful wedding. I will post pictures when the photographer gets done with them  I had good intentions but I only got a few pictures before every thing got crazy.

Early on Saturday Morning, this was how the yard looked. 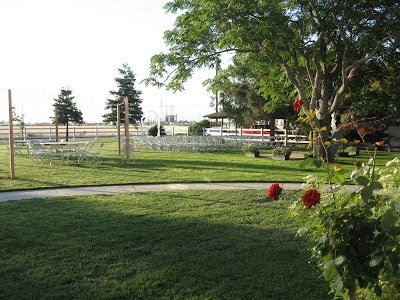 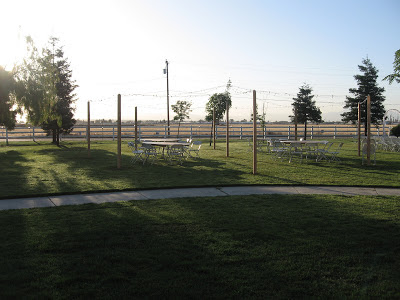 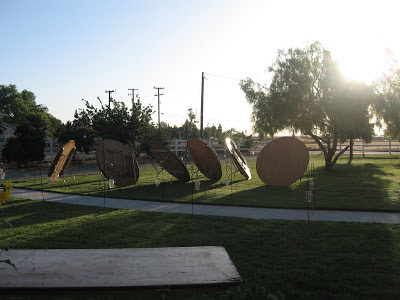 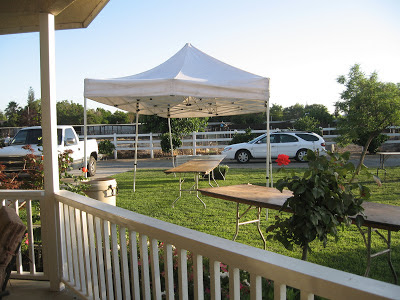 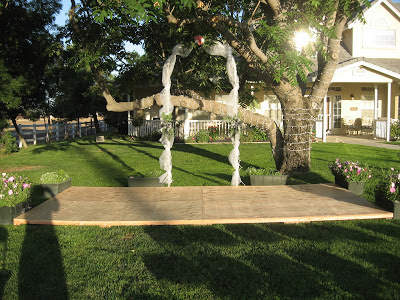 Emilie did all of the flowers herself and made all of the bouquets, and boutonnieres. The top photo is the bridesmaids bouquet.

This was her bouquet. 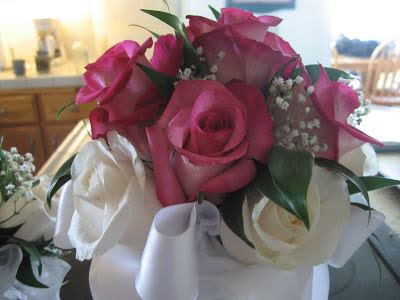 The flowers for the tables. 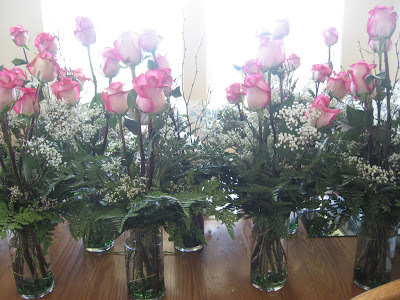 Of course, I have a picture of the bride and bridesmaids getting ready. 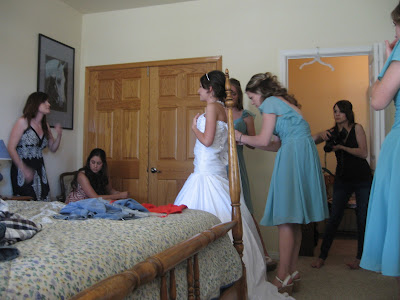 She was so happy. I think my favorite part was as she was getting ready to leave she ran in the house to get some things and she told her Dad and my sister in law and my sister that " This was the funnest wedding she had ever been too in her life! " I knew we did good. It was worth it. 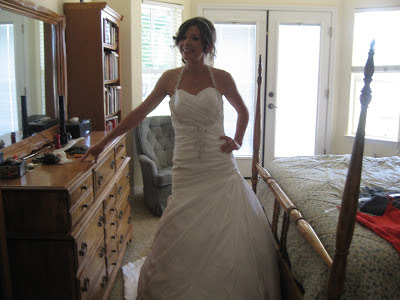 This would not have been possible without the hard work of our family and friends. The best thing I think though, was Megan's Dad let us use his sound system. What a sound system! The speakers were five feet tall and the sound board is what bands use in concerts. Emilie and Nik had picked play lists for the music they wanted.
I danced with my kids and my grandson to Johnny Be Good. ( I was so tired by Saturday night, I didn't get embarrassed.) We had dinner and then they cut the cake, then I served ice cream floats. Lots and lots of floats. The funnest part was Emilie wanted glow sticks as favors at her wedding and they were big necklace kind and handed them out so that made the dancing lots of fun. My favorite part was the music that played as they were leaving was from Back to the Future. Back in Time. Nik's uncle had an old car from the 40s that they got drove away in and we stood with glow sticks as they ran down the side walk with that music playing.
You would have thought we planned it but of course we didn't, it just happened so that made it fun.

I will have to show you our pasture when I get that picture. There were so many people here they parked all the way to the back trees in our pasture. The whole entire pasture was filled with cars.

This is a long post so I will stop. It was a beautiful day and I am very, very thankful for every single bit.

Thank you so much for coming along for this ride.

I am definitely glad it's over! I think the cutest part was watching Nik walk around so nervously before hand. It was very sweet. I wish we had been able to stay to see them off. I'm bummed we missed it.

I was thinking about you today, and wondering how the wedding went! Sounds like it was great...can't wait to see more pictures! Emilie is a talented girl...the bouquets are beautiful!!

i loved hearing all this! gave me a chill to know it all went well, you were happy, SHE was happy, and i know all of your guests must have had a wonderful time!

and now i want an ice cream float...

It all came to pass in the most wonderful way. Your hard work paid off and it's nice that everyone help and was part of the whole celebration. I'm looking forward to the pictures you promised.

The flowers are just gorgeous and the arrangements are beautifully done. Congratulations on the whole thing.

I knew it would be perfect...good for you! SO glad you enjoyed it ALL!!

Oh, Kim! I could have read and read! It is really great to hear from you again! It sounds absolutely lovely!

Like Nellie, I was ready to read on & on! What a glorious day.

ohwow...over with! Such a long time and hard work preparing. I am so happy that it all went well.

What a glorious day! Emilie is simply lovely in her wedding gown. Congratulations to the new bride and groom, will be looking forward to more wedding photos. Hope you have your feet up, you've earned it!! Hugs, Julie.

Homeschool on the Croft said...

Oh wow ... the flowers are *gorgeous*! Absolutely stunning. How wonderful to be able to have your wedding in your own yard. What a dream! No chance of us being able to do that, unless we wanted the tables ending up in Iceland! Can't wait to see more photos .... and don't ever feel your posts are too long. Nooooo!
A x

Oh Kim, I'm so glad it went so well.
It just sound awesome!

I can only imagine how wonderful it all was! I can't wait to see pictures. You must be exhaused, exhilarated and drained... but what a wonderful wedding it must have been. Your place looks just great. All that hard work helped to make it such a memorable time for everyone. Good going Kim!

It sound like a perfect (and fun) wedding. I look forward to seeing pictures ~ LOTS of them.
Pug hugs :)
Lauren

It all sounds soo wonderful! I am happy for you that it went so well. The bride was just GORGEOUS. I am soo looking forward to all the pictures. Put your feet up lady and relax, you did it! And they will cherish the memory always! HUGS

Oh how wonderful...it just sounds priceless. It looks great.
I still don't have wedding pictures from our daughter's wedding in March...only the ones from people's phones.
Yes the new norm...for so many of us and it keeps changing...so when will there be the new norm?
Hugs...rest...I know you are exhausted.

Emilie was such a beautiful bride. Maybe your new normal could be a career in party planning! LOL!! I don't have the organizational skills to pull off such an important and memorial event. You did a great job.

Sounds like a wonderful wedding. Happy, happy memories for everyone. I look forward to the pics.

I was finally able to have a blessed chat on your front porch. I slept all day resting my neck. I had such an amazing time and loved every minute of everything. Blessings and kisses abundantly ha ha

It looks wonderful and the bride is fabulously beautiful in that dress.

Internet Online System is very usefull and Billions of Peoples use Internet and Many of the peoples want to make money online from home and make online business for a life time
We have the best Online earning System with Data Entry Jobs, Online Jobs, Network Marketing, SMS Earning, and Much More Online Work From home, Skype : Jobz.Corner
JobzCorner.Com