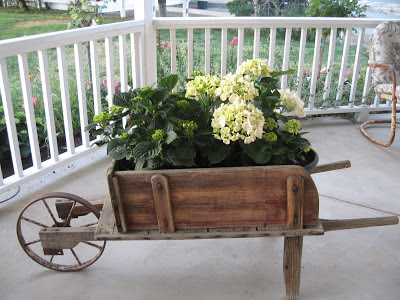 The weather finally changed. The high pressure system we have been under has moved on and the heat is gone. The Santa Ana winds are gone. There have been so many fires all around us. On Thursday I could stand on my front porch and I could see 4 fires that were less than two miles from me. It makes it so hard to breathe. One of them was near a horse stable and they were having to evacuate the horses. 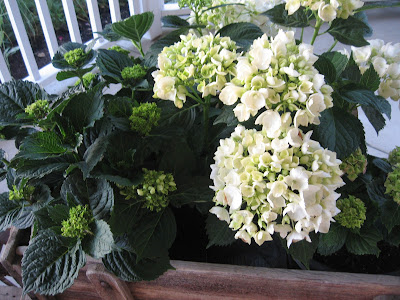 Our to do list for the wedding is getting smaller. Everything is falling into place and just clipping along.
I am trying to make a list of things I would like to do this summer. Yesterday I got Stacy Nash's new book
called "My Name is Lidya" 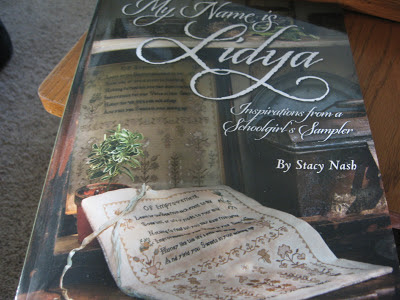 I am making a list of things I am going to make once all of the hoopla is over. I am looking forward to exchanging my hula hoe for a needle and thread.

When I was a little girl, my grandparents had this cherry wood bed and my grand mother had a vanity table
that we would sit at and put on her make up and comb our hair. After they passed away we just took their things and stored them in the old garage that sits next to my house. Emilie and Nik didn't have a bed or bed frame and I told her about the bed in the old garage. She said she wanted it. 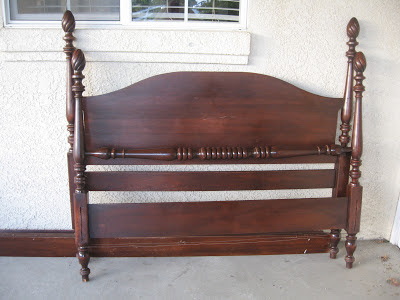 It seemed a lot bigger when I was a kid. My grand mother loved this bed and you can tell she took such good care of it.
Here is is a close up of the pine cones. 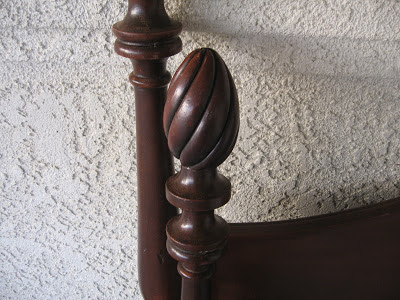 When I was a little girl, we had moved out here for some reason, we had the bed in our house. We lived in the old farm house and my grand parents lived in the Quonset hut. I will take pictures of that some day. I had a friend over one night and we got the bright idea to jump on that bed. The old house had ten foot ceilings and we were jumping trying to touch the ceiling. I knew I wasn't supposed to jump on beds and to jump on that one was really forbidden. I remember hearing the phone ring and my Mom marching in to yell at me. It seemed my grandmother had seen us jumping on the bed. I always thought she must have looked in the window and went back home and called my mom to tell on me. That was the only time in my whole life my grand mother ever got me in trouble with my mom. 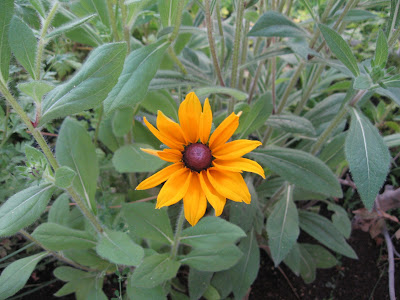 My grand mother had a large extended family. They would all get together and since I had about a million cousins those times were wonderful. The adults would play cards and we would pile into that bed and tell ghost stories and laugh and talk until we would go to sleep with the sound of the voices and the laughter in the next room. There would be so much food and we would crawl into my Papa's or Mama's laps and listen to the stories and drink tea from quart jars. I still think sweet tea tastes best from a quart jar. Making tea at my grand mothers house was a ritual. Every morning, my grand mother would boil water in the pan she used just for tea. She used loose leaf Lipton tea. She would use a big soup spoon that she kept in the box. She would put four big spoon fulls in the water. She would move it off the heat and put the lid on it and let it steep.
She would take one cup of sugar and put it into a gallon glass jar. She would take the strainer and pour the tea in the jar and then stir the hot tea with the sugar so it was all mixed, then she would add water. I still make tea that way, except I use tea bags. She would have said something about me using tea bags and inwardly I do cringe a bit. 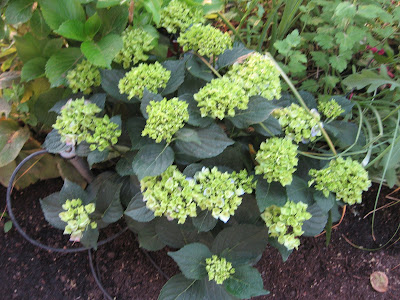 This was my hydrangea my husband got me for my birthday. This one will be blue. He knows I would rather have a plant to plant in the ground rather than flowers in a vase. I cannot believe all of the different colors of hydrangeas they have come up with now.

Well, today, we are putting into the parking lot. At least one thing you can say about my field of dreams, it can be used for many different things.

I hope you have a wonderful Sunday, full of life.
~Kim~

the bed being gifted to the newlyweds is wonderful. good luck with the parking lot! getting close now!

so glad the fires were not any closer. gosh...

The bed is lovely! She DID take wonderful care of it.
I hope you have LOTS of time to stitch this summer.

The bed is beautiful as are your memories.

I have many of the same, company and loose leaf tea (I use a tea ball) and grandma close by. Family was closer then...

What a nice family heirloom to pass on to the newlywed.
I love the jumping on the bed story. sorry it got you in trouble, lol.
Love, love the hydrangeas in the wheelbarrow.

You must see such a transformation with all the effort you are putting in.
So you're trading in your hula hoe for needle and thread. I think that it's a great idea.

I can't wait for the wedding now.
Hugs,
JB

My daughter when she got married her and hubby has
bough cherry wood Dresser's his and hers and the bed. It looks so lovely. They have been married for almost 25 years soon and it looks like the day she bought it.

You completely tapped into my soul when you talked about the childhood experiences. . .I still have, and use, the wooden bowls my great aunt Ella gave me and the meat grinder too. Traditional family memories are so important to pass on to future generations, don't you agree? BTW we have had several fires in Sonoma County and we are praying for rain, or at the least, heavy fog from the coast!!

I love all the stories! I'm glad that old bed is still in such good condition. I was afraid the summer heat would have ruined it. It's nice and pleasant here today, too. I threw together chili in the crock pot and now I don't have to worry about dinner.

i keep hearing about these dreadful fires, i am so happy you still have some distance from them!!

i just adore hydrangea, as a young girl, i called them snowballs!!

I love the old bed...but the story of where it came from makes it even more wonderful than it's beauty!

The bed reminds me of my Granny's bed, which was passed on to her eldest daughter, my great-aunt. What a beautiful story!

Did I miss your birthday? I just got a hydrangea too. I got a Peppermint Stripe one. It's pink and white. I just bought four apple trees, a plum, and a nectarine. I hope hubby plants them soon. Thinking of you. Glad the fires aren't any closer.Scary!

What a beautiful bedframe...how wonderful for Emilie and Nick that it comes with such a rich family history. Glad to read wedding preparations are under control, I am sure everything looks just beautiful. Two weeks till the big day! How scary those wild fires must be, we here have been watching them on the news. It is extremely dry here in Maine too, you would think with all the snow we have had it would be wet, but not so. Hugs from Maine, Julie.

Love that bed ... and the stories of your memories of that quilt.

I love hydrangeas. I've tried growing an everblooming azalea on the side of the house - two tries, two failures. I think I'll try putting another hydrangea there.

Glad that you'll be trading in the hula hoe for a needle and thread before too much longer.

I was glad to hear that the winds have gone now. That would have been scary having the fire so nearby.

I enjoyed reading about your memories of your grandmother. It sounds like you are making good progress toward the wedding.

Enjoy this Sunday evening. Here it is already our bedtime.:-)

I so cherish the memories of my grandmother too. All of them are precious and I pull them up nearly every day just to remember such good, positive times. I've been thinking about y'all and those fires. I was hoping they were not where you are. Stay safe. If I'm going to get flowers, I want them to be something I can plant too. It seems such a waste to kill them just to bring them inside. I think I get this from my grandmother.