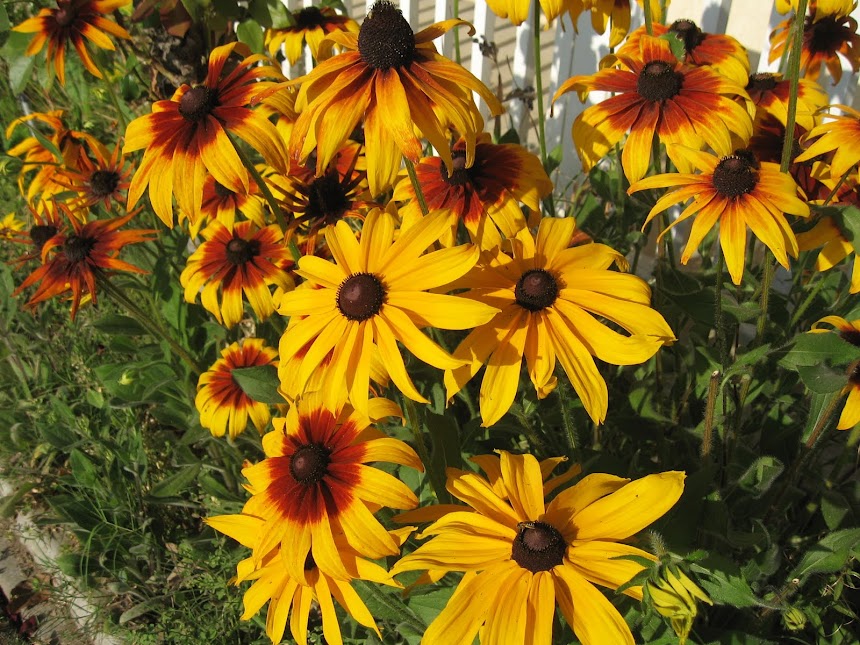 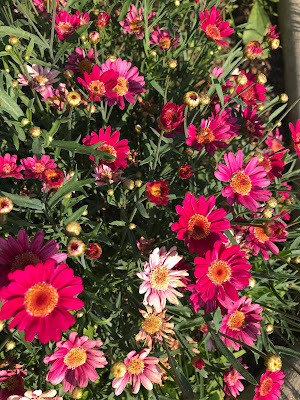 I love that today finally feels like summer. Today the skies are blue, the wind chimes are singing softly to itself. The yard is green and my flowers are spectacular. We won't talk about the weeds, that really enjoyed the rain we had in May. I have always been thankful for spring, but this year I am happily looking forward to summer. My beets are ready to pick and get packed in jars. That will be next week's project. We had moved our berries this winter and I knew we wouldn't get very much, but I thought maybe enough for at least one cobbler. Nope, something went out there and ate every single berry. Every one. It was kind of startling to go out and not even a single red one left.

We have these strange foxes that have moved in so maybe its them. They don't have fuzzy tales like a fox, more like a dog/fox hybrid. We were working in the garden and it was noon and I had my chicken out with us and it wanted a chickens so bad it was willing to take the chance with us there. Even Sasha spotted it. I haven't lost any chickens so that's good.

Here are a few of the garden pictures I took. 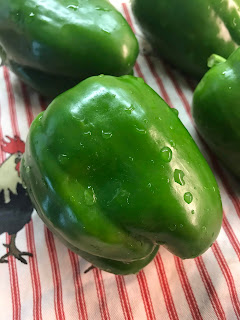 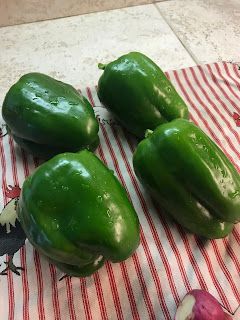 Our first bell peppers.  I don't think we have ever grown bell peppers that looked like this, and I know we have never had them this early. 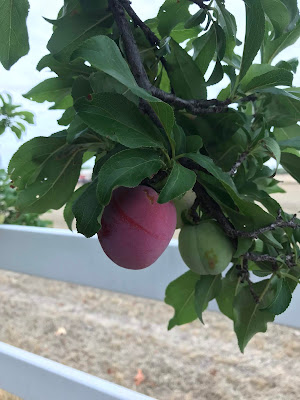 The plums are getting ripe. We just haven't had many warm days yet. I wanted them to be ripe with Ben and his family were here and I would check to see if any were ripe but they never were. 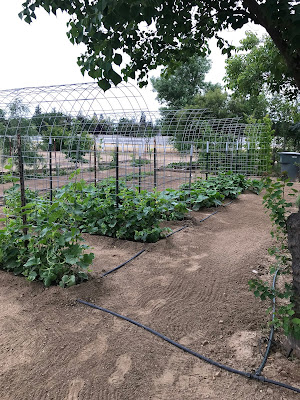 I can't ever seem to get the whole garden in one shot with my camera. Its becoming such an oasis to me to be out here in the early morning. There is always something to see. I couldn't go out last evening and this morning when I went out I was surprised at how much things had grown in the night. 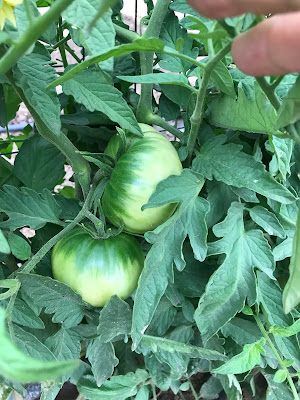 I planted 18 tomatoes from seed this year. All eighteen are loaded with tomatoes. I am going to have my hands full when they start to get ripe. 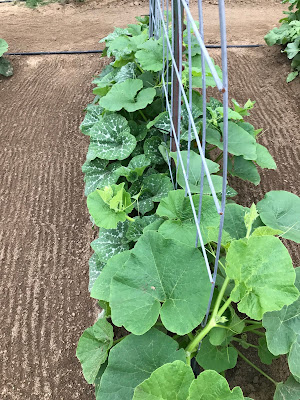 I think the cattle panel arches are my favorite thing in the whole world. What a easy thing to have for arches. I can't wait until all of them are covered in vines. 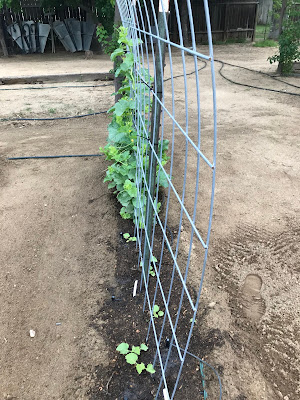 These are called Tigger melons. They are kind of a personal melon. I think they like really warm weather and I think next week when we start flirting with 100 degree temps these will finally take off.

I planted pumpkins just one row and in the hole I also planted sunflowers. I am hoping the pumpkins will climb the sunflowers. I tried it one year and it worked pretty well. The pumpkins were good because they weren't on the ground and the squash borers didn't go up on the vines off the ground. That is why I am doing vertical gardening this year. I have dug and read and watched videos of the different things people have tried to keep their vines safe. Only in one place did I see where someone said, that "an old timer mentioned he used sulfur around the base of the plant." We found food grade sulfur on Amazon and I hope it will do the trick. I am desperate to not have the bugs win. 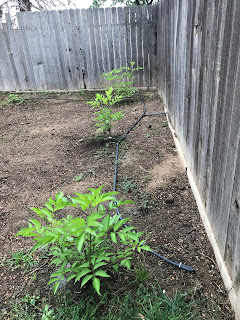 This year I decided I wanted Elderberry trees. At our first house we had a very nice one, but since I was a very new wife, mother and gardener. I told the kids to not eat the berries. So they called it poison berries. Years later, when I was learning about herbology. I came across one of the best things to have in your garden is an elderberry tree. Everything on a elderberry is good for food and medicine, the bark, leaves and fruit and even the roots. In one of my herb books  was a picture of the poison berry tree we had had in our back yard. Boy, did I kick myself. I decided this was the year I was going to put some in and I bought four different kinds. They really like it back here. I am so happy to see them growing like they are and hopefully someday I will get berries to make syrup. 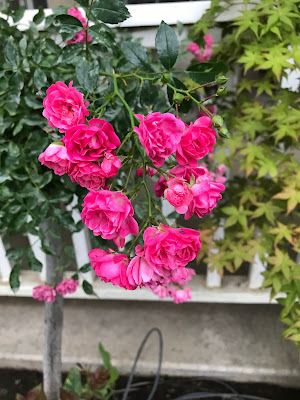 Welcome June! I am so glad that you are here and the weather will hopefully settle down.
Thank you so much for stopping by today,

Your garden is so pretty and well-kept! And what a thrill it is to see how happy the garden makes you. Our spring has been too wet to plant a garden, but I've set out a few tomato plants which are almost hidden by the weeds. Weeds thrive in the wet soil. :)

So much wonderful bounty in your garden! Wow, 100 degrees already? It's still cool here. I'm in no hurry for the hot weather, but I don't like the June gloom either. A little sun is always nice. Can't wait to see how your garden grows!

the garden looks amazing...you are so lucky to have those troubles, i.e. too many tomatoes, i am in tomato envy!!! the peppers looks awesome as well, i can't believe all your garden is producing so early in to the season!! your flowers are looking mighty fine as well!!!

our weather has been all over the place and we have been having a lot of storms!!

Everything looks so amazing and lush! You're going to have a great harvest of tomatoes it looks like!
I showed S. your cattle panel arches, and he thinks they look so neat!
We need to make some like that in our next garden :)

Have a happy weekend.
~K.

Wow, your garden looks amazing and I love those beautiful arches. I'm jealous of your bounty already but not of the heat. 100 degrees already is too hot for me, a northerner... I just put 4 little pepper plants in the garden yesterday. You are getting quite the gardener. I love that you have all those fruit trees but I'm sorry about the "no berries" this season.
Wishing you a great month of June. Hugs, Julia

Your garden is amazing! Yes, you will be very busy with tomatoes! I hope that sulfur works with your squash. We always had trouble with bores, or something like that, and were never overrun by squash. Best to you on this very fine June Sunday! -xoxo

Kim, your garden is looking wonderful! Beautiful green peppers, plums & tomatoes. So glad you had a blessed time with your family! God bless you!

Your garden is spectacular, Kim, I was so envious reading of your time in your garden, since being under a heat wave with high humidity, I am not able to stay long in my garden, this saddens me because if I could I would stay all day, and would love to sleep outside sometime. Years ago when the grandkids came for the summer we spent many nights sleeping outside. I so miss those days.
We have had trouble with slugs eating our plants, so Dear One and I bought beer, and placed small containers in and about the garden and have had great success! I love to walk through the garden in the morning and see the drowned slugs. lol
Thanks for sharing.Have a blessed week.
Blessings,
Sue

Oh Kim, your gardens look so pretty. You are growing wonderful things !! Those plums are calling my name.
Maybe your night cam could tell you what ate your berries ?
Rose

Your garden is nothing short of AMAZING Kim! It looks like something that should be in a gardening book! The space between all your lush green is almost as pretty as the green stuff LOL. I am not sure what I am most envious of (and yes, I know it’s wrong to envy)....the lush green, the tomatoes (I don’t enjoy them fresh unless in a salsa or bruschetta (weird I know), but oh how I love to can them stewed for my tomato soup and chili. My mom used to can them for me after she retired and while I worked....I used the last of them this past year. Boo hoo. And beets! My husband loves them! But I would fight you for those plums! They look incredible! We had a whole plum orchard on our family farm growing up...they weren’t particularly large, but oh were they juicy and delicious.... I haven’t seen anyone else ever have plum trees around here though. And elderberries LOL...that takes me back too... We had elderberry pie, elderberry jam, elderberry wine...you name it. Not my favorite as a child, but now I don’t even remember the taste. And WOW on that rose....what an incredible color! Don’t ever give me your full address as you just might find me on your doorstep one day. ;-). I had a disappointing “garden” day....After a particularly cold night (down to 36), I tried to get a few plants in this afternoon...and started noticing the majority of our shrubs and perennials were dying on the tops...a very strange withering going on.... What we figure happened is that the people who sprayed our lawn for weeds didn’t heed that it was windy....and overspray is killing them. I literally sat down and cried. I don’t even feel like trying to plant anything at this point. :-(. ~Robin~. (Sorry for the lengthy comment, but I needed to vent...and knowing your love of plants, I know you’d understand....)

The temperature goes up and you call that "settling down" -- haha! But really, I am appreciating our high temperatures... Even though they are 20 degrees lower than yours, I've had to slow down in the middle of the day and take walks at either end.

I hope those foxes go away!!

Look at your lush gardens!!! Everything looks so beautiful and it makes my mouth water. We used sulfur to keep the rodents away from our high moisture corn bags, but of course it would seem that it should also work for your garden! I'm curious to see if it does! We sell it where I work...
Isn't it great to watch things grow?!