Summer Is Flying By

I hope you are having a nice week. Today the weather man said we have had 31 days over 100. I wouldn't be getting these flowers or tomatoes. I would like a few summer storms though. Fire is all around. I had thought I would make it up to see the rugs at the ATHA Hooker Hill Rug Retreat this week, but I ended up not going because of the terrible fires up there. Maybe next year. I would love to see Monica Jones in person. So I worked in the kitchen.

This week I picked this bushel basket of tomatoes. 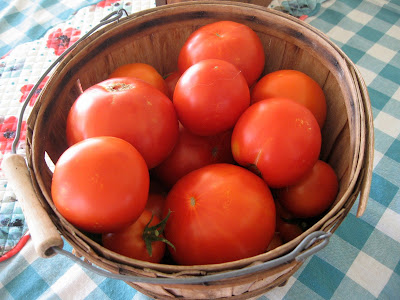 I spent the rest of the day turning the tomatoes into this sauce. 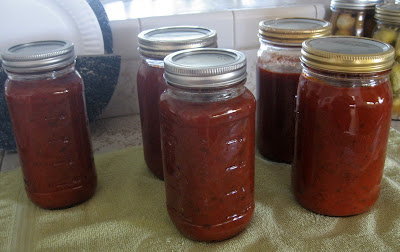 It really is a all day project. Cooking the tomatoes, onions and pepper and garlic until I can put it through my
food grinder. Then back on the stove to cook two, or more hours and then finally getting into the jars after it has cooked down and then in the water bath canner for 35 minutes. I make such a huge mess, by the time my kitchen is finally cleaned that takes a while too. I was pretty tired yesterday. My tomato vines are still loaded with tomatoes so I hope to repeat this a few more times before summer is over. 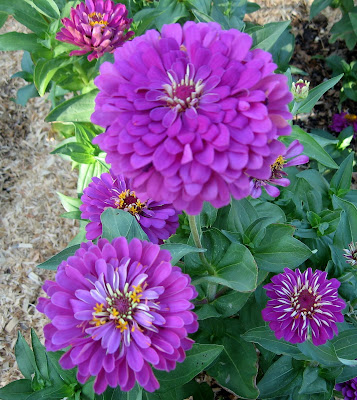 My flowers are still producing and most of my zinnias are multicolored so I thought this was interesting that this plant has nothing but purple blooms. 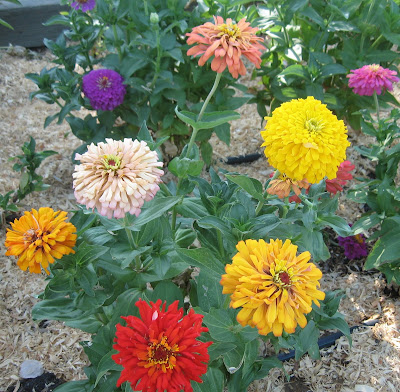 Most of them look like this. That purple bush is in the background.

I was out with my camera. I normally have a hard time getting pictures of the orchard bees when they are on the sunflowers. I got this series of three photos that made me so happy. I would like to share them with you.


My sunflowers are growing so fast and the finches are already chattering up a storm, as they wait for the
sunflower seeds to harden. I found this sunflower already in the process of being opened by the finches. 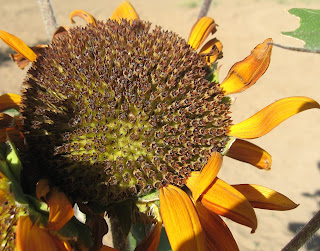 The finches take the brown stuff off and watch and check on the progress just as I keep checking the fruit on the peach and nectarine trees. I noticed yesterday that I have a male finch with his red summer colors on his chest and face starting to follow me around when I am outside. Finches chatter almost non-stop. Even when they are alone. The male was flying ahead of me tree to tree. By the end of summer the trees and sunflowers will be filled  with a large flock. I will have to race them if I am to get a few seeds to plant. 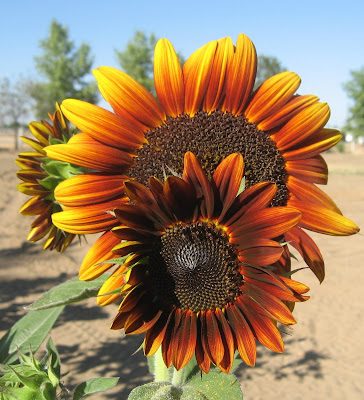 This summer we have some pretty large ant hills. The kind with giant red ants. I have always been intrigued by those kind of ants. I like to stand and watch them as they carry giant seeds or bits of straw or even parts of other dead bugs back to the ant hill. I like them because I always think I will get an ant farm and then have a steady supply of ants. Don't mess up and get them from another ant hill that you think might have been the same kind. Its results in horrible results. I had one in my kitchen when the kids were younger and lets say, I am still scared by what I saw. I haven't ever had one again so I am content to watch them outside.

Earlier in the summer, I don't normally have my pest control guy spray out in the garden, but we have these box elder beetles that really get bad so I have him go back out there and spray the trees that the box elder beetles live on.
As I was walking ahead of him, I hear him remarking to himself, " Wow!! What a big ant hill!!" He is just spraying the heck out of those poor ants. I wanted to cry. Every time I walk by that ghost town of an ant hill. I am reminded why I don't let pest control out in the pasture. I have found that mulching and fertilizing has done more for my pest control than any thing I have tried in the past. 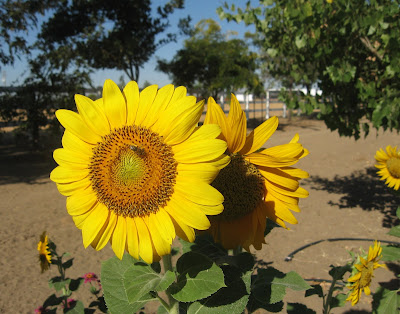 That is my animal and bug stories for the day. I think there are so many dramas being played out every day and I never even write about half that I see on a daily basis. Like this year, we have so many of those tiny dragon fly looking things that are from ant lions. They are what are pollinating my tomatoes. I think it is because we have had such a wet winter, and of course, the ant hills.

Its never a dull moment. I have been hooking but not as much as I wish. I hope you have a delightful weekend.

I feel like I know just what it's like to live where you live. And I like it, except for the heat. We've got hot and humid and we've had some big time storms. I don't mind as long as they are destructive. Everything is so lush and green but not nearly as lovely as your tomatoes, zinnias, and sunflowers. :) We did have something interesting happen during yesterday's storm. The DOT had this covering on one of the big bridges and it fell down onto the cars below. No one was injured but one lady went to the hospital for an anxiety attack. That would have been me had I been up there. The bridge was closed until late this morning and that was awful for traffic as the bridge is on one of only two interstates running through here. Anyway, the story is here: http://www.postandcourier.com/news/dot-investigation-into-fallen-safety-net-that-closed-don-n/article_8b9f6d0c-6d41-11e7-8fb3-9f0f8268b9e2.html and the pictures are better here: http://www.postandcourier.com/news/netting-falls-on-don-n-holt-bridge-during-storms-halting/article_e4a7f816-6cc3-11e7-be95-8f3bc300a33d.html

That chocolate sunflower is gorgeous. The purple zinnias are pretty cool, too.
Oh, those tomatoes look so yummy. I think I need to find some farm tomatoes and make myself a tomato sandwich!
You sure have had the hot weather!!! Sorry you didn't make it to the ATHA retreat exhibit.
Hugs :)
Lauren

Your sunflowers are just gorgeous! I don't hardly see huge red ants but maybe once a year. The really big ones with the black stripe. I figure they sting so I don't mess with them. We do have fire ants, which I will gladly kill on sight. They are horrible and their sting hurts bad.
I hope you have a super weekend. And I hope it is not as hot there as is it is here. :)

I love to hear about the things you notice in your day-to-day working in the gardens. We have some great big ant hills out in our fields. They are fascinating to me too. We've had some of the BIGGEST bumble bees ever this summer. I always wonder where they are carrying that nectar and pollen. I wish I could find a hollow log with honeycomb in it!

Zinnia's are my favorite and yet I rarely plant theI don't know why. The bees are so sweet and important.
If my tomatos ever turn red I will be making sauce and glad to know I am not the only person who can wreck a kitchen making sauce.
Stay cool we have very hot days but it cools off at night.
Cathy

Zinnias are my absolute favorite, but mine don't look even half as beautiful as yours !!! Maybe I need to water them more !!
You love ants and ant hills ???!!! My least favorite bug. Would love to hear your ant stories ;)
Rose

Oh dear, your tomatoes are so nice, big and red. You have such courage to stay in the kitchen for making tomato sauce.

Red ants hills would have me call the pest control. I'm not sure they are the fire ants but I would be too afraid to find out.

Your zinnias are so beautiful.

We had a huge thunder storm last night after I went to bed. It was so very hot and muggy but the big downpour cooled things off and watered the garden and yard deeply. I spent an hour and a half watering the back garden in the morning.

I still can't post from my blog.
Take care and don't over do it in the heat.
Hugs, Julia

I always enjoy my visits here, Kim, you indeed have a busy, and wonderful life! I am finishing my canning tomatoes this weekend, I made salsa yesterday and today, and plan to make tomato sauce tomorrow, you are so right it takes a lot of time and makes such a mess, but so worth the effort! I love Zinnias and planted lots of them tis year, we are under such a high heat wave with humidity that it is almost impossible to work outside, I can;t imagine having over 100 degrees for 31 days, do you have humidity?
Have a blessed weekend and watch out for those ants, we have fire ants and they really hurt you when they bite!
Hugs,
Sue

your sunflowers, as always, are gorgeous...and so unusual!! i have not been knitting as much as i would like to be but i am getting some done!!!

amazing sauce/gravy, i wish i could do that. my sister is canning beets right now!!!

I was very fortunate to be able to visit your page.
โกลเด้นสล็อต
สูตรบาคาร่า
บาคาร่าออนไลน์

I soo enjoy visiting you here and getting even a glimpse into your life. Those flowers are ALL soo gorgeous, and the bee pictures are VERY impressive! I imagine the canning is soo much work but so satisfying, and how nice it would be to have such an abundance of things to chose from to eat eventually. We haven't had a particularly hot summer....yet..I KNOW it's coming still. August and September are our big ones, but we have had more humidity then usual. I can't say as I like it, lol. Enjoy the rest of your week!

Those orchard bees are really something.

And the chocolate sunflower is the BEST!!