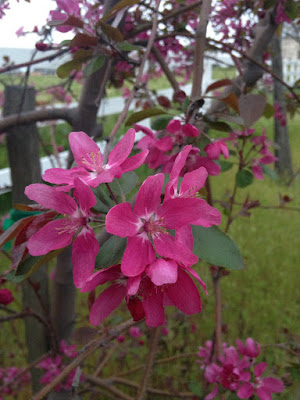 Spring is around the corner. I still can never decide which time of year I like best. I guess, I always like just where I am as the best. We went to an auction on Saturday. The only experience I have with auctions, has been livestock auctions, which I always loved. So much so that when I was in kindergarten, my Dad would take me out of school so I could go with him. But as an adult, never. I see how a person could get really addicted to them. I had such fun. This was an estate sale. The reason we went was in the listing they were offering these rock spheres. 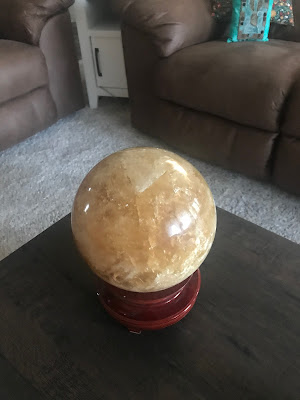 If you go to a rock shop, they cost so much money. Ron loves them and we have some small ones and a middle size one that we bought years ago. There were so many listed, we decided that we would go and see if we could bid on them. He bought this one, and he bought another that looks like it but this one has more crystal in it. 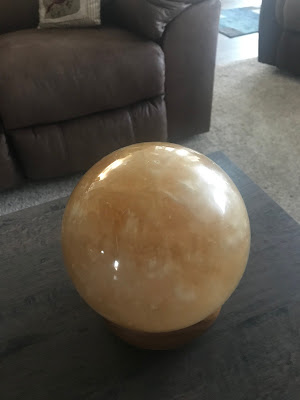 We went to a rock hound once and Ron was asking him how to make spheres. We laughed when the man said, " Don't ever start making spheres, because that is all you ever want to do." They are really unique. This last one he bought was incredible because as you look down into its surface, it glows like there is abalone shell in it. 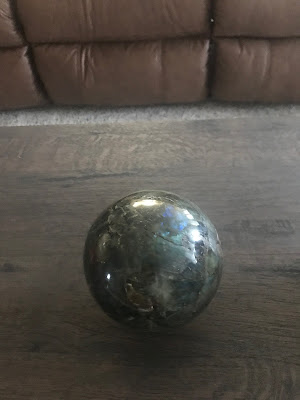 My phone really can't pick it up. It is really so pretty and so different from the other two. We got there early and I was so glad we did, it really was more like going to a museum and finding things. There were things that were so old, I think they did belong in a museum. I had no plans to buy anything and as I walked around this is what I saw. 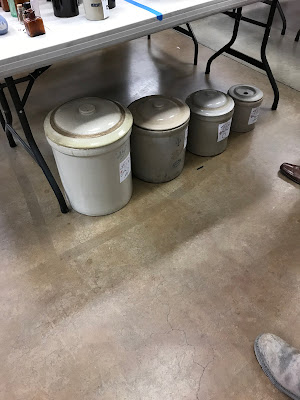 Underneath a table in the back, here sat these beautiful crocks. I about lost my mind, while trying to look like I wasn't interested and not trying to call attention to what I had found underneath this table. I told Ron that I wanted the first two if they didn't go very high. Never in a million years did I think I would get all of them. I guess crocks are an acquired taste. No pun intended. They even had the lids. The last one to the right on the end had two more inside. They put the last couple in one lot so that was how I got them. The big one is a 6 quart, the second is a 4 quart and the third one is a two and the last I think is a one gallon with the smaller ones inside. 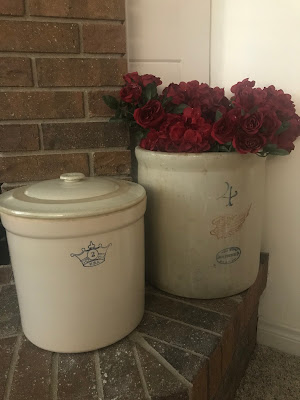 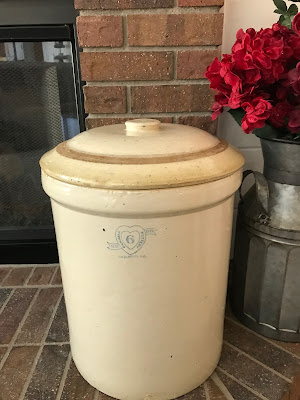 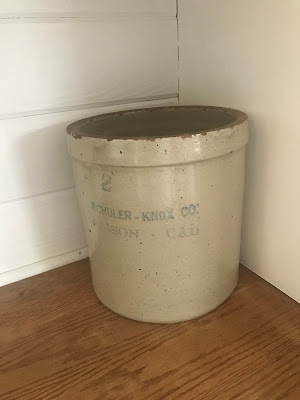 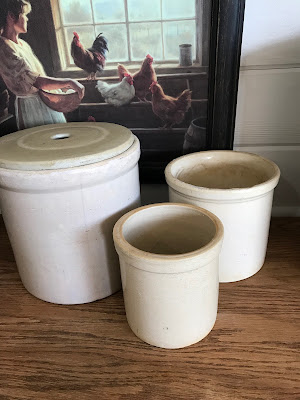 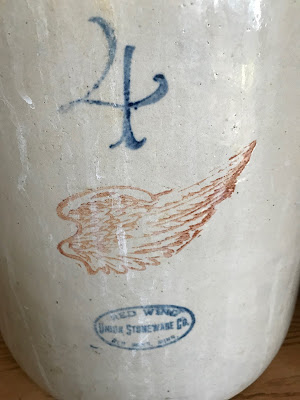 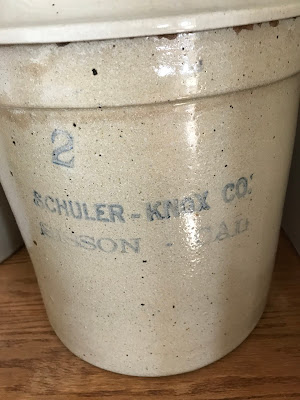 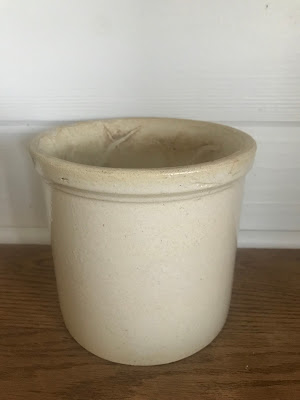 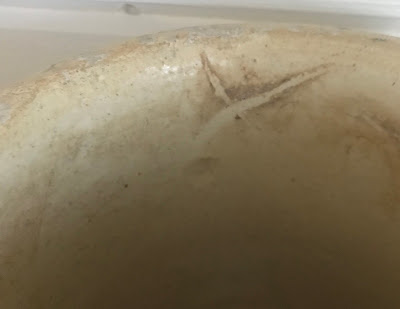 You can't see this on this one but down on the side there is a thumb print and a small "P" on the bottom.

They had all the lids and that Schular-Knox 2 gallon has so much patina. I came home and washed them all and I just couldn't believe I got to bring them home. I think what always makes me sad, is I won't know the history. This auction was only the first part of the estate. The second in next Saturday.

There were these lovely tables and chairs. I would have loved to bid on it but I knew it was going to go sky high so I didn't. 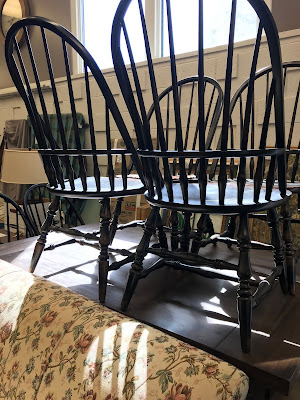 The leaves for the table were underneath that table and the leaves were as thick as my hand. I really wanted those chairs, but I had set a limit for myself, and it was way, way above my limit. I didn't get the picture of the captain's chairs but they were very nice too. So it was a very nice day for us, and quite a learning curve. They had a very nice collection of Navajo rugs and blankets and woven coverlets, but I didn't know enough about them to even know if what they sold for was a good price. 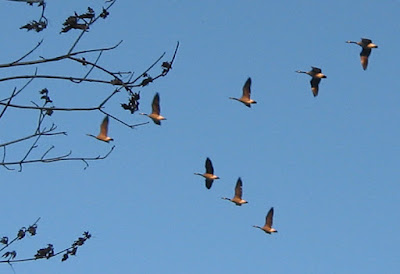 I am going to rearrange and play today. I never thought in a million years I would be able to get crocks like that. When we drove to North Carolina last year, that was one of the things on my list to look for and buy. I didn't ever expect to find any like this here in California. I was looking at an estate sale the other day, and they had a two gallon crock but it looked like they had used it to catch motor oil. It made me so sad to see that. But now, I can stop looking. They really have got so expensive. Well, for me. 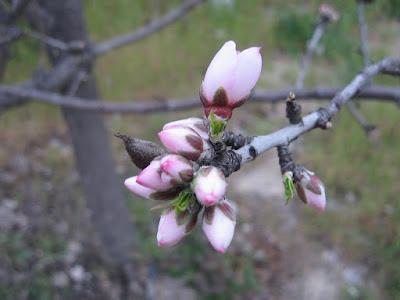 I just wanted to share this today. I hope you all have the best day. I think I will have a really nice day now that I am awake. 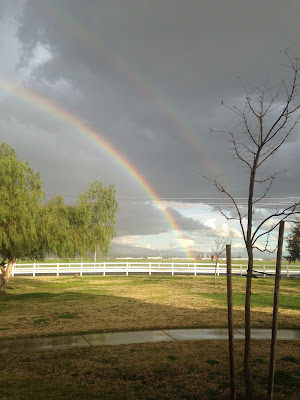 “I think that love is more like a light that you carry. At first childish happiness keeps it lighted and after that romance. Then motherhood lights it and then duty ... and maybe after that sorrow. You wouldn't think that sorrow could be a light, would you, dearie? But it can. And then after that, service lights it. Yes ... I think that is what love is to a woman ... a lantern in her hand.”

Wow I would have gone for them too and I have a lot of crocks but I use every one. One has potatoes, onions in another, birdseed, a garbage can in the bathroom, I love them.
Cathy

Love love love those crocks! Very good purchase! Sadly I am an auctions junky and as they are still online here, it makes it way too easy to participate!

Such lovely finds! SO fun, too! xo

Wow! such luck at the auction. I'm glad that you both got what you wanted. Luck was on your side for sure. Such lovely crocks. The crock with the hole in the cover looks like a butter churn but I know nothing about crocks.
I like the cool spheres.

I love crocks too but only have the one which was my grandfathers. Glad you got your auction on, lol.

I can't wait until the weather gets warm enough here in Utah for Estate sales I love them. Great find on the crocks.
Cat

Wonderful crocks...especially the 4 gallon Red Wing.
I bet you are still grinning ear to ear ;-)

Wowza....I say score!! I feel indulgent if I ever manage to come away with a crock...let alone a flock of crocks...and with lids no less!!! The table and chairs look amazing as well... We don't have estate auctions like that in these parts LOL. I used to love going to auctions but haven't gone in a long, long, time. Sadly any that had any good old "treasures" were filled with dealers who outbid any and every one. Sorta took the fun out of things...not to mention making things completely unaffordable for us "regular" folk. And I love Ron's spheres too... I have a special affinity for rocks/crystals... I have my little stash of bits and pieces, but nothing like that. What a fun day! ~Robin~

The collection of crocks is so good!
I'm so happy for you to have gotten them and I love their character and patina. You just can't duplicate that age and look with new crocks!
I love Ron's stone spheres, as well. They are very pretty.
I smile to think of you both as 'junkers' and out to auctions. One thing is for sure, the more you go, the more you will know about what is a good deal and worth purchasing.
If you don't go, you won't know. Just think, you may have missed out on those crocks...Yikes!