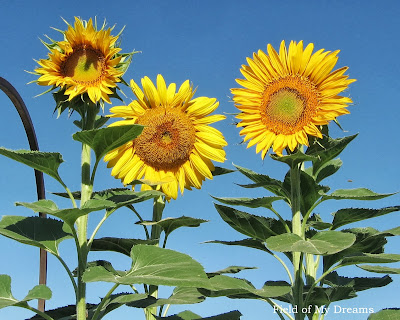 Are you going to watch the eclipse today? I might walk outside but that is about it. Did you have a nice weekend? You know all summer, I have tried to be a nice blogger. I have tried to stay away from things that are well you know hard. I thought today as I am still upset the best way to get it out of my mind is to tell you about it. So here it goes!

In July, we got new neighbors. All people that are 21-19. Parties every weekend. One weekend one of the friend that stays there, did donuts in the gravel and did thousands of dollars of damage to three of our cars, and broke a window in Ron's shed and left rocks everywhere on our property. Big rocks. Rocks in the swimming pool. We called the sheriff and the kid who did it was drunk in the cab of the truck with no drivers license.  He didn't even get a ticket. So it has been one thing after another that I won't go into here right now. I want to tell you about this morning. 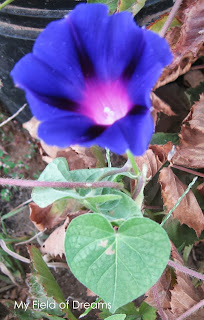 I have some new sunflowers and I wanted to take some pictures. I always water very early in the morning and that is when I do my walk. This morning I wanted to pick some tomatoes too. I had my camera in one hand and tomatoes in the other when the dogs that live next door, came running up to me while I stood there. Thankfully Sasha had not come outside with me this morning. No, I did not have my phone. There are two German Shepherds and a Rottweiler cross. The largest German Shepherd is almost as big as I am and the young one is the size of Sasha. The other one is a little bigger than Sasha. The big one ran up to me and was barking and growling. I just stood there. I kind of talked to him but he barked louder. I thought I can jump in my tomatoes if he gets any closer or goes to attack. 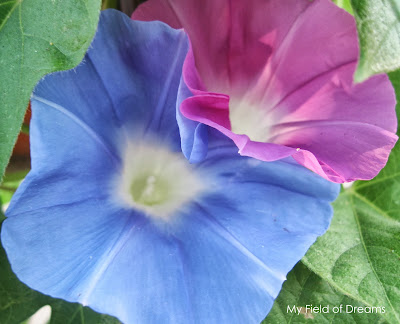 All I could do was pray, " Help me Lord!" The little one decided to run off, and the big one followed. I was closest to my shed so I ran to there and I was shaking so hard I could hardly get the latch undone. I got in my shed and I was holding the door, and they saw me and ran to my shed and stood outside it. The big one was growling and barking again and I just stood there. I was praying that someone in that house would wake up and call off their dogs. Finally the little one ran up to Ron's shed and I took that moment to walk very fast down to the back gate. As I was going in the back gate, I heard someone call them. Then of course, I had to listen to that person beat those poor dogs. I wish I could go beat them!!
You can't blame dogs for acting like dogs! This has happened over and over again. Only this time I was afraid I was going to be attacked. I haven't complained because I just hate the dogs getting beat. They are turning them into mean dogs though and that makes me sad. I won't even tell you about the poor horse. 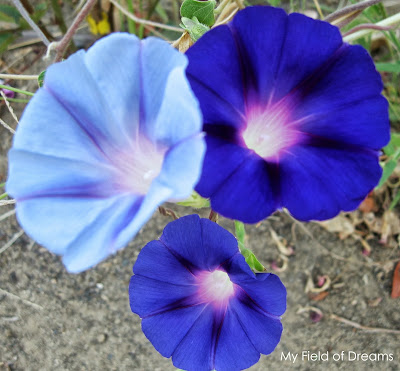 Just writing this down makes me feel all shaky and sick again. Ron said he would call the rental company and see if they will contact the owner to put in a fence. When the owner bought the place he took down the fence that was on his property. The only fence is our split rail fence which is mainly for looks. He told us he was going to put in another fence. Which he has not done in three years. So this
has been my summer. I really do try not to complain about it, but this morning was so scary to me. When I was kid, I got really bit bad by a German Shepherd. So to say I was so terrified would be an understatement.

I think I will take skunks!

Have a lovely day,
~Kim~

So sorry about the neighbors from hell!!! The police did that punk no favors by letting him go. Next time the results could be catastrophic.
May tomorrow morning be more peaceful.
Hugs 😊
Lauren

Wow Kim I could have written this post! We live next door to a huge antebellum home with a cabin on the property. The women who bought the property has never lived there but she lets her son and his buddy live in the cabin. First it was 2 Great Pyrenees and 2 goats. They would jump on me, come on our porches, gashed my knee, etc. After 6 months of talking to the 3 we had no choice but to call animal control. Since then they have mostly kept the dogs up. Now they have a German Shepherd and another dog. Same problems all over. I had my son take pictures of them in our yard yesterday and left a copy of the county ordinance on their mailbox. Do you not have any laws about loose dogs? We live in the country in GA and we do. It is so unbelievable that people care so little for others. I don't think I have the right to make you afraid in your at home.

How awful! Neighbors! Sometimes they are fantastic and other times they seem so out of it. Let's pray for this batch to move and someone nice to move in.
I'm so glad you are okay. Scary.

Oh my gosh! That is so scary! You'll have to start carrying pepper spray or something. It won't be long before they start attacking people.

I agree Kim, you should carry pepper spray. This is awful.

I hope that you get better neighbours soon. I'm so sorry this is happening to you on your own property. It could be one of your grandkid that got attacked by these vicious dogs.

I hope that tomorrow is better for you.
Hugs, Julia

I'm so sorry to hear that your little piece of heaven does not include nice neighbors. I agree with Karen, let's pray that these guys move on and someone nice moves next door.

Lots of times a group of dogs just makes things worse -- the pack mentality takes over. I would think there's a dog ordinance in your area.

My grandma always carried pepper spray to deal with aggressive dogs. How horrible! It is such a frustrating situation. Maybe it would help if you went to the police and discussed your concerns, especially the animal abuse. Life is hard enough then took added disrespectful neighbors. I'm sorry.

My grandma always carried pepper spray to deal with aggressive dogs. How horrible! It is such a frustrating situation. Maybe it would help if you went to the police and discussed your concerns, especially the animal abuse. Life is hard enough then took added disrespectful neighbors. I'm sorry.

awwww kim, what a heart breaker. i don't love dogs, i was bitten once and i am still afraid. i find people don't control their dogs and everyone thinks that i want to pet their dog. your story is a nightmare and something has to change!! we have great neighbors here and i have been very lucky with my neighbors (who all have dogs) they are very understanding!!!

i think pepper spray is the answer....

and that whole eclipse thing - i never did get it and i'm glad all the hubbub is over. on to the next thing!!!

Amen on the pepper spray and use it when they come close! I bet they won't return!! Your story even makes me mad. We have a rental house next door to us, and thank god, finally the horrible renter moved out after 4 years of hassleing us. I am so glad they are gone, the guy was bad news--asking for money, fighting with his wife, he even stood in my yard and called me a bitch. We put up a 6 foot wood privacy fence and it was the best thing we ever did. You have the right to protect yourself and your property.

I am so sorry your home is not a place of peace for you. It says how they are if they mistreat animals.
Call the humane society
Cathy

Ugh!! What an ordeal! May it end as soon as possible. Animal Control, law enforcement? - we pay for protection from this sort of encroachment and I hope you can get it to a greater degree than at present.

Don't get me started on people who beat animals. Can they be reported to animal control or something? For animal abuse? OMG I'm so sorry you're having to deal with this. This is just awful. I'm terrified for those dogs. Please be careful when you go outside. Surely something will be done. What did the police say about the kid not even getting a ticket? Private property or something? Who's cleaning up and paying for the damage? Goodness.

WOW, Kim that was a terrible experience, I will be praying that these people will soon move, and like you I don't like to see animals mistreated,, and it seems these are! Please be careful when you are outside! I am so sorry you are having to go through this,maybe the owner will be more responsible.
Hugs,
Sue

Kim, I will be praying for your and your family's protection...I know this was very scary and I do pray it doesn't happen again. Living in fear is no way to live. I am so sorry..

Kim, that is too bad about the neighbors. What a pain. I would be freaked out if a dog was coming after me!!!
I will pray it gets better for you.Hugs cheri