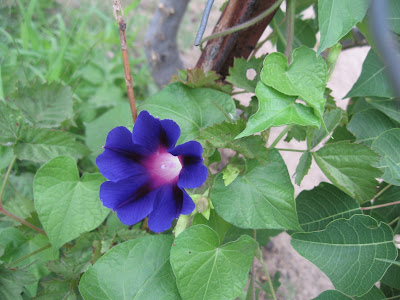 I have to write fast as today is a clean the chicken coop morning. My chicks have officially made it to chicken status. Would you like to see my bantams?You would? Good. They are lovely but the relationship is changing. They have become not sweet little roosters, but abusive and my arms have bruises now where they peck.

First, this is who I started out calling Buddy. Now his name is Freddy aka Kruger. He is having a very hard time being nice and the evil nature just plain wins out. At night, when I go to the coop to lock the chickens in, I have to brush away the sawdust so I can shut the door. As soon as he hears the latch on the outside door and my feet come in the coop, I hear his tiny Ninja yell. I walk very carefully, hoping against hope he won't attack.
So far its Freddy 10 Me-0. He gets me every time. Sometimes he waits, while I am bending down, utters this scream and attacks, pecking the fire out of my hands and arms. Other times he just pecks once and coos this sweet sound he made in the beginning of his chick years. He is tiny but he has the heart of a lion.

This is my favorite rooster, though he is turning into a grumpy kind of guy. His name from the beginning has been Hercule Poirot. When he was a chick he was just black and white. Now he looks like this. I think he is so pretty and classy.

That little white hen in front, I call The Princess. She is very aloof and just a bit different from the other hens.
I think she is so pretty. I love her feather covered feet.

I couldn't get a very good picture of this guy. I was really hoping he would be a hen, but with bantams because you only get straight run I ended up with three roosters. He is adorable. He has a really deep, bok-bok voice. He is also feather footed. When I thought he was a hen, I named him Dot. As in Polka-Dot.
I am sticking with Dot. It just fits him. I think he will end up being the dominant rooster just because watching him maneuver through hen house, he would be a good politician. He is friends with all the hens old and new and he shares all of his food already with everyone. My little hens of course are sweetie pies and I am thrilled with them all. They still think I am their Momma hen which feels nice. Pecks and all. 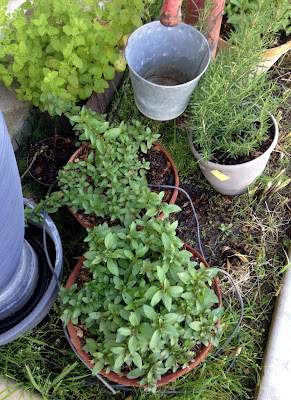 Since chicken stories kind of took up most of my blog and the title of the post has gardening in it I thought I would show you my herbs. I have peppermint, spearmint and lemon balm and rosemary. I am going to make tea out of these.

The new chicks really liked my comfrey. It will come back. Most amazing herb for cuts and bruises. At my other house I had so many different scented Geraniums. Its been slower for me to find the kind I had there.
This one is lemon. This is my second year of Echinacea. I still plan on planting some Camomile as it is my favorite tea of all. I did plant dill yesterday out in the garden. When I make dill pickles I always have the hardest time finding as much dill as I need. 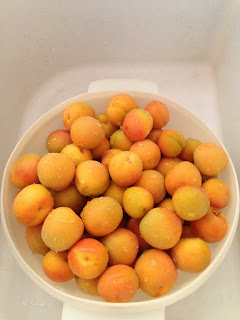 I hope you have a lovely Saturday. I am turning these apricots into jam as my next project. Then of course some might have to be a cobbler.

Thank you so much for stopping by today,

Your hens and roosters are all so lovely. I just love those beautiful feathers... You should wear some long padded sleeves to protect your arms from pecks or scratches. They must hurt.

Your herbs are all growing so nicely. I've been planting some annual flowers this afternoon, that one of the nurseries owner gave my husband for me to plant and my poor back is really aching after weeding the garden and planting. Now I'm late for work. I got rained on while planting and had to come in till it slowed down...

That first little rooster looks like a painting. I'm sorry he's so mean.
The apricots ARE like golden sunshine!
I love your herbs!

I'm so sad that Freddy is mean! I could sometimes gentle my roosters by catching them and petting them a lot whoever they attacked me. Sometimes it worked, sometimes it didn't. I love the Poirot one. His colors are so striking! I just want to pet him.

Naughty roosters! They are so beautiful, they should be nice. I've let my pullets out of the coop and am mixing them with the old hens.

Your herbs and apricots are great. I can't imagine picking fresh apricots. Yum! I had to tell you that the comfrey you sent me is growing beautifully this summer. I think it finally really "took hold" and decided to be happy here. So thanks for it!

off with his head and into the stew pot! My grand parents had those roosters and they get meaner the older they get lord they would chase us all over the yard.
Love your herbs we need sunshine in the worse way
Cathy

I love all of your chickens. They are beautiful. I don't think I could put up with Freddie's attacks. How many chickens do you have? Your flowers look great. I used to have scented geraniums, then I accidently left them out when it froze. I should get some more, as I miss them. Thanks for sharing. Everything looks great. I would so love to have apricots. They make the best jam.

Oh, I'm coming over to your house ! The life of chickens, gardening and apricot jam and cobbler. ;)
What a wonderful life !
Enjoyed your post today.
Rose

Cute chickens! I've always loved Bantams, and they are the best setters!

awwwww, your pickin' apricots story - i love it!!! the first chicken doesn't even look real freddy kruger, i LOVE that!!!! good chicken stories but yes, the title should have been "chicken stories"!!!

the herbs look very good, i love having fresh herbs!!!!

I miss my chickens....not so much the roosters. I would spend hours with my chickens and ducks. You can learn a lot about people by watching chickens & roosters, and how they interact with each other. Some were so much like how humans interact with each other. I found I would rather spend time with my chickens and duck rather then people sometimes. The roosters always being the meanies and pecking the back of the hens head!!! Never understood that.

Oh Kim You never fail to make me smile . I have missed your blogging !. After having got locked out of my blog years back I took to Instagram in frustration , but I have missed the in-depth shares of the bloggers. Since Honey Bee is now doing a little blogging (lol) I figured I could pop in and visit some of my old buddies.
Have a great Day !
Hugs,
Willow