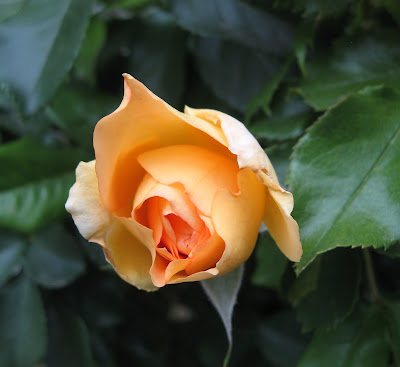 When I looked at the date of my last post I was shocked. I am sorry I have been away so long. I thought I would let you know that the skunks packed up and moved after I wrote my last post. No reason other than they are shy and we make too much noise. Sasha started not paying attention anymore and we set the camera for two days and nothing. We buried in the hole and nothing has dug around it since. They are still around though.

I went out early yesterday morning. I had walked one lap when I noticed that Sasha was staring intently at the pasture next door. Thankfully she is such a smart dog, that she doesn't leave our property unless I tell her to so she hadn't started the morning off by smelling to high heaven.

Here is what she saw:

I grabbed her by the collar and dragged her in the yard and shut the gate.  She barked and threw herself a little hissy fit. I didn't care. Then I watched it ramble off with its little rolling gate back three pastures over to the new place they must be living now. They are very small, just lots of fur. They are very proud of those tails. I have noticed they like to wave them around like flags. 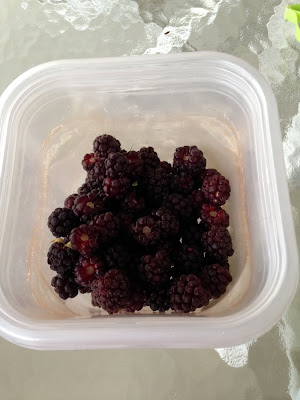 I picked my first batch of boysenberries after the skunk was gone. Sasha was able to come back out and she rolled her eyes at me and walked on past giving me a cold shoulder while I was picking berries. She went out in the pasture looking very much like she wasn't going to speak to me the rest of the day.  She just ignored me and spent her time with my chickens. 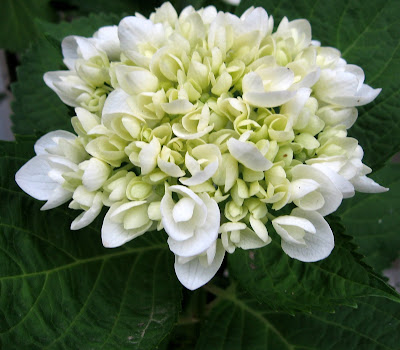 Blue jays are very territorial. Apparently what I found out this week, is the berries are not mine to pick. I have been scolded and told off every time I even look side way at the berries. The blue jay is so brave that she will sit in a tree above my head as I am bent over looking for ripe berries. She will break off sticks and drop them on my head. She squawks the whole time. I have to put a lid on my picked berries as she will fly down and take every one. I thought the first day was just a fluke. She did it today as well. I just laugh because she is so brave. I will try to get a picture of her tomorrow. 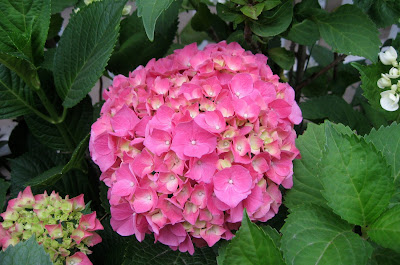 My hydrangeas are huge this year. In fact one bush is so tall its above my head. When I take pictures I have to stand on tiptoes. Of course, today is 103 and its so hard on them. My garden likes it though. My beets and sunflowers and zinnias are up in one bed and my row of sunflowers around my garden is growing so much that every day they look an inch taller. I planted cucumber and pumpkins this last weekend. I know I am going to regret planting as many cucumbers as I did, but oh well. My pickles turned out so good two years ago and I just opened my last jar. So its time. 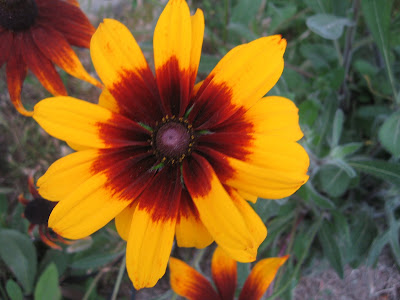 The other day I went to the library. I had a book in and one of the guys that now works there I knew as a kid. Which is weird because he is the same age as me but I remember as being younger. I was friends with his Mom and his sisters an eon ago. We visit when I go in and this time he wanted me to read some books he had found. Really not my cup of tea but I said I would. As I am reading along, the person in the book starts talking about Bakersfield and Valley Fever. I thought how come this always happens. All the time.
So today I was digging around and found that he and his wife used to live here and both wrote for our local newspaper, The Bakersfield Californian. My thought was, all roads lead to Bakersfield. Isn't that funny? 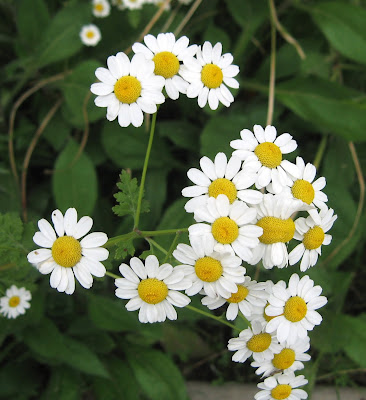 I have a friend in England and we used to exchange books back and forth. I sent her a package one time and as she was at work the post man left the package with the next door neighbor. When she went over to get her package. The people who were never very nice is what she said, were extremely chatty. She said they asked " Who do you know in Bakersfield California?" She told them and they said that, " They had lived there once upon a time." Even George Bush Junior was a little boy on a tricycle here. So go figure. 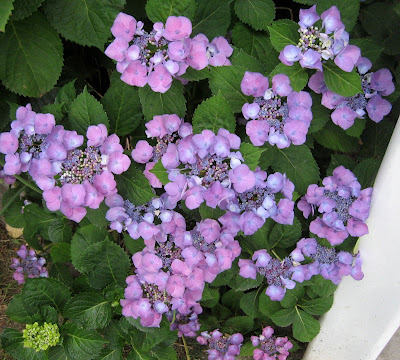 So just an odds and ends kind of post today. Not much going on other than me trying to find out how to keep from cooking my brain. It should be a tad cooler tomorrow. Sasha is snoring at my feet so I guess she isn't mad anymore. I am going to go walk and let her watch the cats that live at the back of the pasture. She thinks its beneath her to chase them, so she just stares mean eyes at them. She knows that smart animals don't go running around in the heat like her owner is getting ready to go do. 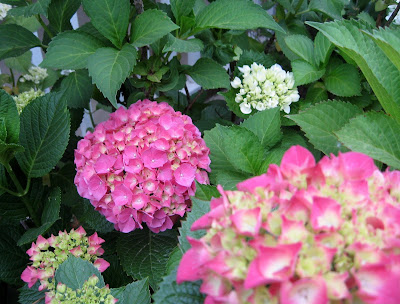 Have a delightful week!

You're lucky the only thing the blue jay is dropping on your head is sticks :)
It is a small world, isn't it? And getting smaller all the time.
Hugs,
Lauren

Those bluejays are pretty but they are bossy and chase the other birds away from my feeder.

Every time I prepare carrots, I think of Bakersfield and then I think of you. It is a small world.

You think it's been a long time since you posted. It's been about 5 weeks since I posted. Life got so busy and my iPhoto library is full and so is my hard drive so I had to delete some photos to make room to upload some for my blog.

Now I'm getting visitors today and tomorrow and can't seem to fine the motivation to post on my blog. So many have stopped posting.

I was supposed to blog about my trip but didn't.
I'm glad your family of skunk left for a quieter hotel. haha.

Your Hydrangea looks beautiful. Mine are just starting to grow leaves so far.

Have a great week.
Hugs,
Julia

Beautiful flowers !!!
103 degrees - wow, I can't even imagine.
Glad your skunks have moved on.
Enjoyed the "spices from a million flowers " quote.
Rose

I enjoyed your post! I had to smile a little here...just picturing Sasha rolling her eyes at you, and that Blue Jay dropping sticks on your head!! I'm glad the stinky skunks are gone. You have such gorgeous flowers...but I can't imagine how I'd function at 103 either...hope they (and you) don't wilt in the heat!

Yahoo! So glad the skunk family moved on.
That Sasha makes me smile; she's so full of personality!

That's pretty funny about the bluejay nicking your berries. You need a big ol' scarecrow :)

Have a great day, and keep cool.
~K.
BTW... your hydrangeas are gorgeous!

Glad the skunks have been held at bay. I knew BlueJays were aggressive(have a lot in Florida) but not over their food source. Very interesting.

hehehe, i LOVE the way you tell a story!! all animals, even the birds have personalities and habits that you can easily learn! i'm glad the skunks have moved on, they are so smelly. they usually hit here right around now or whenever i change the air freshers in the house. talk about a buzz kill!!!

your images are gorgeous, i especially loved the peach rose!!!

Your flowers are all SOOO lovely. My mother's hydrangeas (we planted two of her's in our front planter) have just started blooming a little bit. I hope they are even close to yours. Enjoy the rest of your week!

It's going to be 105 today, but it's supposed to cool down again for the rest of the week. It's like summer is flirting with us. Today the kids helped me make bread and cookies. They're very happy. I'm trying to get everything done before the heat sets in.

I always love reading of yours and Sasha"s adventures, I think we have been harassed by every wild animals except skunks, and I hope we never do, Kim! Though our shepherd, Lucy can come in from the farm smelling something awful! i accuse her of messing with a skunk, though I haven't seen one!.
Wow you are already over 100, we have been in the nineties and so muggy, I had to come in much sooner than what I wanted to this morning, we are also under severe thunderstorm warnings until 2:am yesterday there was a tornado that touched down in a nearby community, sure hope it by-passes everyone today!
Your blooms are always so beautiful!
Thanks for sharing, I am slowly trying to get back to blogging, it is certainly harder when you stay away, though I do post on instagram! It is so much faster, but it is not as personable to me, I prefer blogging! have a blessed day!
Sue

I'm so glad your Sasha didn't go running after that skunk. I'm happy to hear they've moved out.

What is the white flower you have pictured? It's beautiful. Are you wearing your hat on these hot days? (just a gentle reminder!)

That Sasha is a hoot! I'm glad the skunks are gone. Do you think they'll come back if the neighbors run them off? Even I knew of Bakersfield but I cannot for the life of me remember why. Maybe it was the Stones song, I don't know. It seems a lovely place to be except for the heat. :) My grandmother used to have a huge hydrangea bush in the backyard. I loved that thing. I remember it being white but I also remember it being blue so I really have no idea what color it was. LOL But it was beautiful! Have a great day!

Yummy on the berries!! Your flowers look so pretty. My sunflowers are just starting to grow, Hugs cheri

Glad the skunks are gone!
Pretty flowers!
Can't believe May has almost gone!
Hope you have a wonderful summer!